There’s no place quite like New England in the summer, where even on the hottest of hot days there’s a hint of a breeze by the water. While each coastal town may have some of the same quintessential elements (beach-bleached shingles, lobster trap decor), these destinations all have their own special running routes that should not be missed. To help you plan your next run-cation, we’ve rounded up some of our favorite runs, races and attractions. 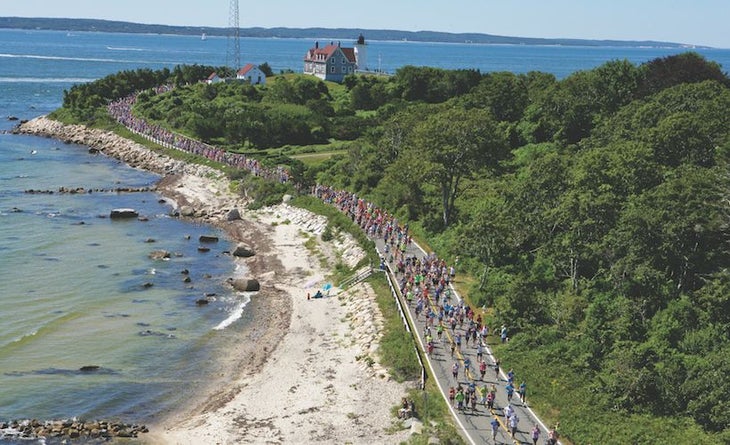 Place to run
Since 1914, the man-made canal waterway has been used heavily by commercial and recreational boats, with nearly 20,000 vessels in the canal each year. The Cape Cod Rail Trail that runs alongside the canal stretches from Dennis to Wellfleet, and promises about 30 miles of paved path (with gorgeous views along the way). If you don’t want to tackle all 30 miles, try starting in Harwich off of Route 24. Keep east to pass a cranberry bog and head by the entrance for Nickerson State Park.
Race to try
Celebrating its 45th running this year, the 7-mile Falmouth Road Race attracts more than 11,000 runners each year. Founded in 1972 by a bartender from Boston who loved running, the race draws an estimated 75,000 spectators, too. Oh, and we forgot to mention that you can do some runner-fan-girling thanks to the many elite athletes who speed through the course.
Must-do
Don’t leave without stopping at Sundae School Ice Cream, which has been making it homemade on the Cape since 1976. There are locations in Dennisport, Harwich Port and East Orleans. 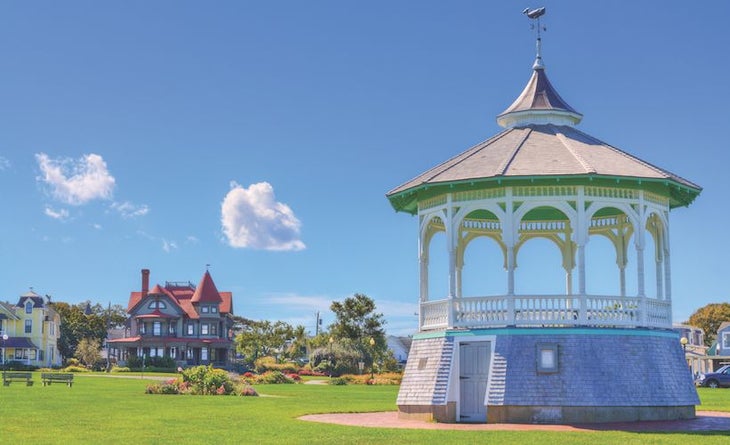 Place to run
Although this island is small (about 15,000 year-round residents), it boasts some of the longest stretches of contiguous coast in the region. From Katama to the Gay Head Lighthouse, for example, the distance is about 17 beautiful miles. If you head near the ferry port in Oak Bluffs, you’ll find a convenient public restroom and water fountain to refill your water bottle.
Race to try
Usually held the second week of August, the Chilmark 5K Road Race has a hometown feel, with proceeds benefiting the Town Affairs Council. Runners of all ages turn out for the event—many of whom use the 5K as a tune-up for the popular 7-miler in Falmouth.
Must-do
Replenish your carbs and fulfill your sweet tooth at Back Door Donuts in Oak Bluffs. Be sure to try the fritters (you’ll thank us!). 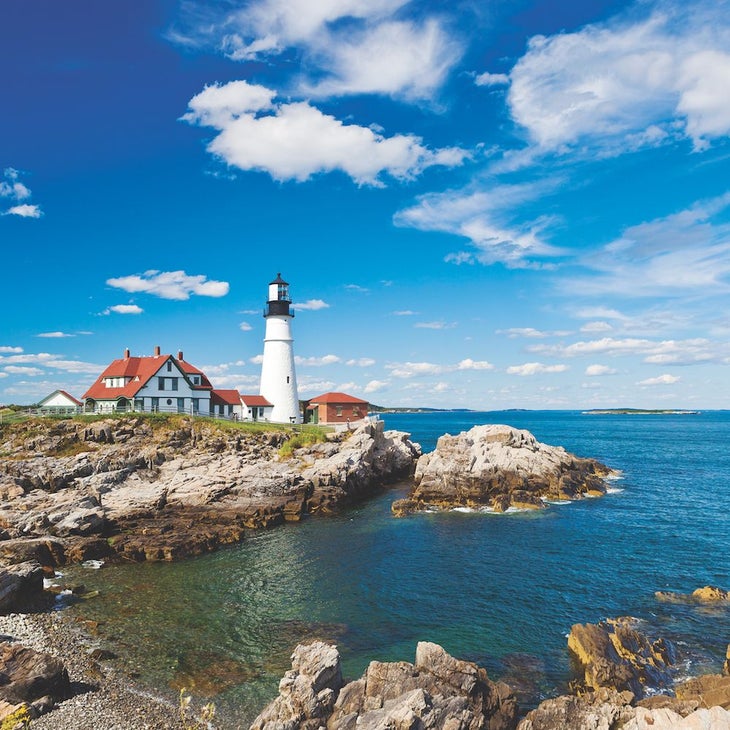 Place to run
From cobblestone streets to the packed gravel carriage roads in Bar Harbor, Maine is a runner’s paradise in the summer. Check out Cape Elizabeth, right outside of the city, which is along Casco Bay. You can jump into the Atlantic Ocean post-run, but be warned that the water stays downright frigid well into mid-August.
Race to try
Cape Elizabeth is also the location of the Beach to Beacon 10K, starting at Crescent Beach State Park (the “beach”) and ends at Portland Head Lighthouse (your “beacon”). This race also happens to have been started by Olympic runner Joan Benoit Samuelson, a Boston Marathon legend and Cape Elizabeth native.
Must-do
Spend some time in Fort Williams Park, which has many historic homes, including Goddard Mansion, built in 1853–59 for Colonel John Goddard. Colonel Goddard was a businessman who commanded the 1st Maine Volunteer Cavalry Regiment during the Civil War. 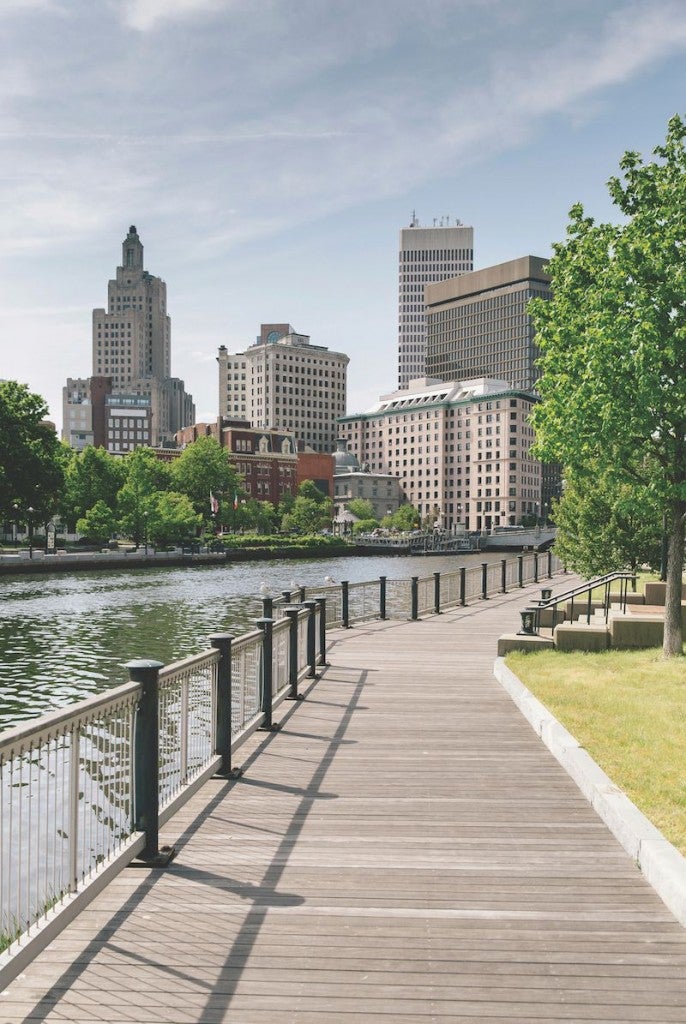 Place to run
The East Bay Bike Path that spans 14.5 miles and crosses the Seekonk River and continues southeast to Bristol along the shoreline of Narragansett Bay. The paved path is used by bikers, runners and dog-walkers year-round and is easily accessible (there’s also ample parking).
Race to try
The Providence Marathon and Half Marathon. This USATF-certified course is a Boston Marathon qualifier. The bonus? It’s relatively flat and fast. The course boasts a nice mix of historic urban and rural neighborhoods downtown while the tree-lined East Bay Bike Path provides plenty of shade and scenic views of the Providence River.
Must-do
Shop or eat on Hope Street. This artsy gem of a neighborhood has great vegan restaurants, art collaboratives and street fairs. 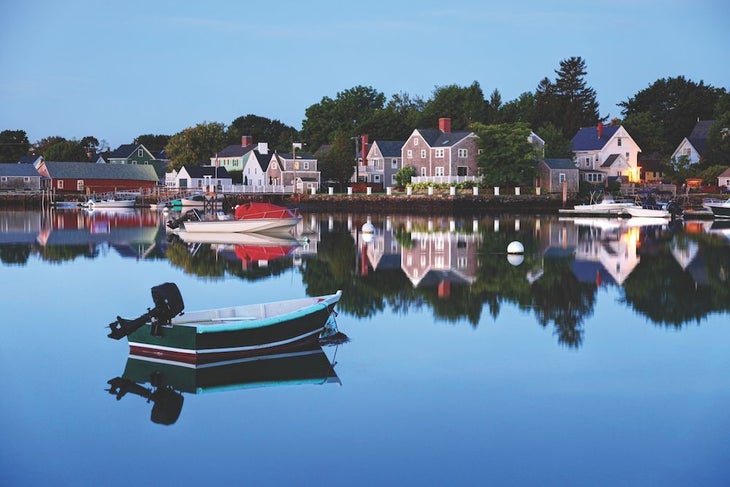 Place to run
A mere 50 miles from the city of Boston, Portsmouth sits near the mouth of the Piscataqua River, which divides New Hampshire and Maine. We love to run around Strawberry Banke, an outdoor museum with nine homes open to the public for touring. It is the oldest neighborhood in New Hampshire settled by the Europeans.
Race to try
The Redhook 5K has great prizes, a post-race feast, live music, a kids’ fun run and more. This local race is so popular, it’s sold out the past six years running.
Must-do
Check out Redhook Brewery and Cataqua Public House, which features 18 taps of New Hampshire beers. 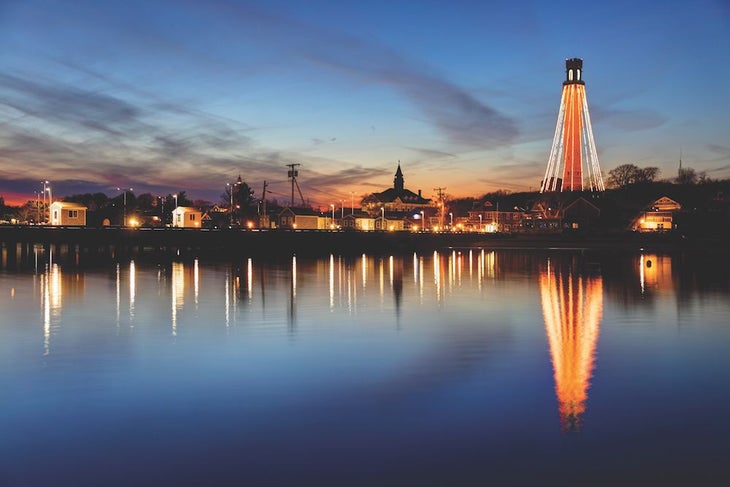 Place to run
If you’re looking for a little cross-training, the Pilgrim Monument is a great challenge. With 116 stairs and 60 ramps, this monument is the tallest all-granite structure in the United States. For something a bit more low-key, try taking an easy run along MacMillan Pier, a traditional wood-planked pier complete with just enough breeze on hot summer days to keep you cool.
Race to try
The Provincetown 10K, which starts downtown and ends at the Provincetown Art Association and Museum, is an easy way to fit in a run and fill your culture quotient.
Must-do
Grab a bite or drink at The Mews Restaurant and Cafe. A P-town staple, with live music most nights, great enchiladas and a view of Provincetown Harbor that can’t be beat. 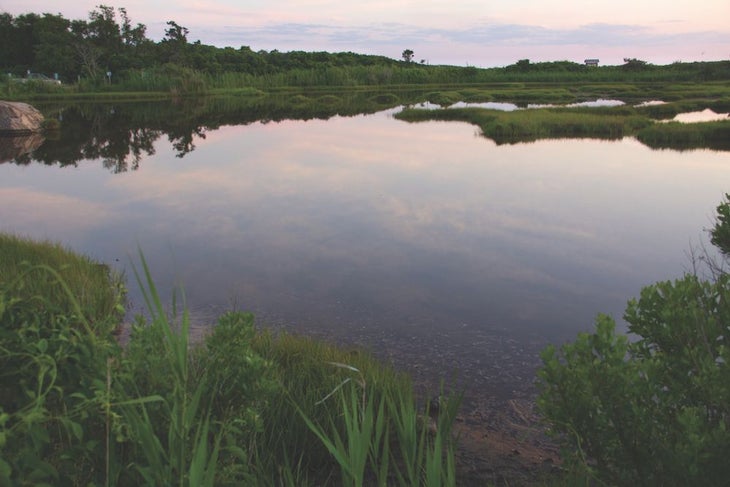 Place to run
Trotting near and through the Madison Beach Club along the Long Island Sound lends itself to some spectacular self-guided beachfront property tours and coastal views. Middle Beach Road lines the water and, being pancake flat and cleanly paved, is a gorgeous strip for road runners to enjoy. Park in the neighborhoods near the beach club and get lost in the quaint streets and many grassy fields in the area.
Race to try
The Hartford Marathon and Half Marathon is one of the biggest racing days in Connecticut. The event also includes a 5K option with a gorgeous course touring the capital of Connecticut and Elizabeth Park.
Don’t leave without
Checking out 26-year-old R.J. Julia Booksellers, located in the downtown area. Complete with the best little coffee shop, the tiny bookstore offers hard-to-find books and great recommendations from enthusiastic employees—and they have played host to some huge author names in more than 300 in-store events!