In the dawn before Sunday’s Humana Rock ‘n’ Roll New Orleans Half Marathon, Neely Spence Gracey broke out a black marker and printed three words on the top of her left hand: Attitude. Believe. Commit. The ABCs, she calls the message.

“I want the attitude right from the beginning that this is a race. Stay focused,” she said. “Believe I could do it. Believe in my training. Believe in myself. And when things get hard, know I committed to this.”

The ABCs began last month with her Rock ‘n’ Roll Arizona Half Marathon victory. “I’m trying to take my running to the next level,” she said. “It’s the little details that help make that happen. It’s something to remind me why I’m doing this. When sometimes you question yourself on the course.

“Those words are important. They remind me to stay focused, stay engaged in the moment. It’s helps me get that little extra out of myself.”

On a picturesque morning that began with temperatures in the mid-60s, the self encouragement worked wonders as Spence Gracey immediately sped to the front of the women’s race, winning in 1 hour, 11 minutes, 2 seconds. 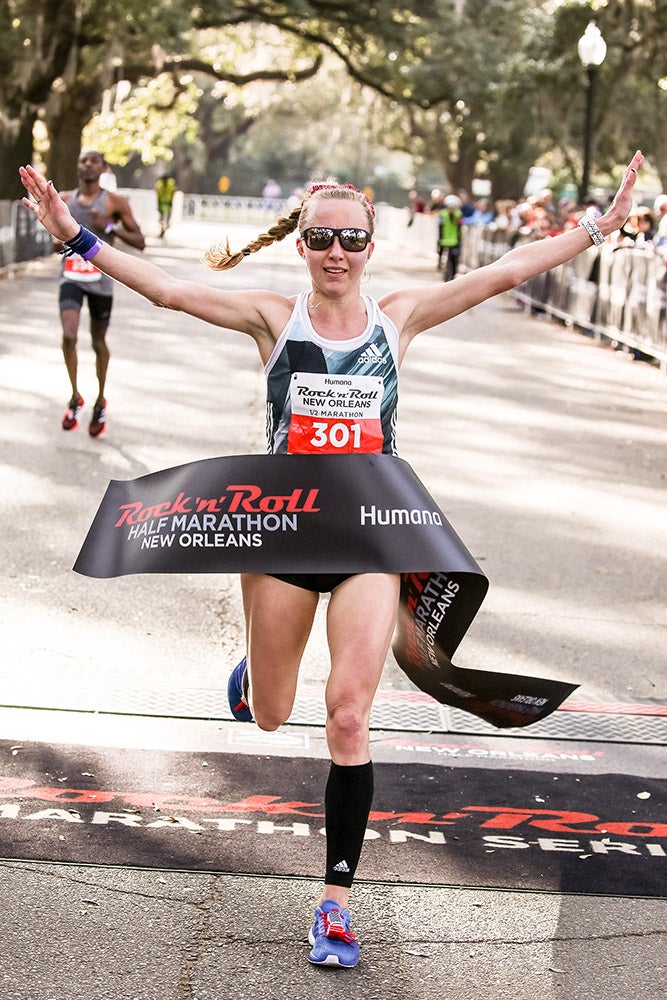 “The goal was to come out and run a hard effort,” said Spence Gracey. “And I accomplished that.

Spence Gracey is coming off an impressive 2016 season. She made her marathon debut last year at Boston, finishing ninth overall and as the top American in 2:35. She came back in November to place eighth at the New York City Marathon in 2:34:55.

After New York, she took two weeks off, enjoying a European cruise with her husband. And like most of us, the break has agreed with her. She won Rock ‘n’ Roll Arizona last month in 1:12:39, then beat last year’s winning time in NOLA for a repeat victory.

“By taking time off, my fitness has definitely come around faster,” she said.

Few athletes were more born to run that Spence Gracey. Her father, Steve Spence, won the 1992 Olympic Trials Marathon. And what’s cooler than just a family running gene? Spence Gracey was born on the day her father ran the 94th Boston Marathon.

‘My favorite part of Rock ‘n’ Roll is the awesome energy,” she said. “It relaxes the environment. Everyone’s here just to have a good time. I really enjoy coming and getting to be a part of the party.”

Besides the usual offerings at any Rock ‘n’ Roll event, this particular course in NOLA passed southern mansions and dipped below massive oak trees. And with few weeks before Mardi Gras, beads hung from trees and trolley-car wires. And as you would expect in the Big Easy, there was plenty of jazz to go around, both on the sidelines and streaming out of bars along the way.

On a course that’s nearly ironing-board flat, Spence Gracey got a kick out of a sign late in the race that read, “This is the last hill.”

“It’s fun to escape the winter in Colorado, come down to the South,” said Spence Gracey. “The people are really nice in New Orleans, there’s great food and the bands are awesome.” Still, the seasoned elite didn’t get too wrapped up in the atmosphere and libation-filled crowd; her final mile was her fastest at 5:09.