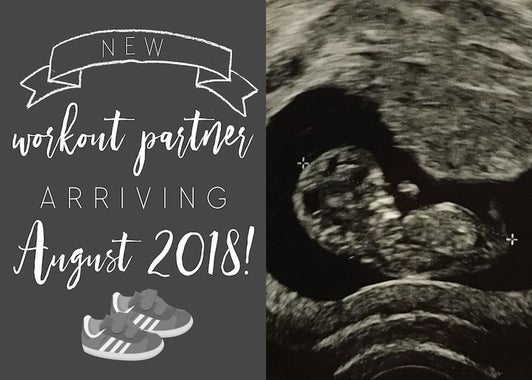 “We are having a baby!” Neely Spence Gracey wrote to Women’s Running earlier this week. Excited to share the news she’s kept bottled up since early December, Neely and her husband Dillon are sharing the above announcement welcoming her “new workout partner” this summer (her due date is August 4). “This is something I’ve wanted for a long time,” Neely told us over the phone. “I’ve always wanted a family.”

As a competitive distance runner, Neely has earned several titles over the last few years: two-time Rock ‘n’ Roll Chicago Half Marathon winner, top American finisher at the 2016 Boston Marathon and eighth-place finisher at the 2016 TCS New York City Marathon among them. But the “mom” title will likely be her most valuable yet—and it’s certainly the one she’s most eager to embrace. Even so, putting her professional running career on a temporary hold was a difficult decision for Neely to make. “Being a professional athlete, it’s challenging to have to put your career on hold for a year or more when this happens,” Neely said. “That’s been a little scary, but I felt like I was ready to take that step. With this being the off year [i.e., no Olympic or World Championship competitions], it seemed like the ideal time. I’m 27, Dillon’s 31; we felt like we’re at the age where we have a lot ahead of us.”

The choice is one that all professional female athletes have to make: Will she step away from her career for a year (or more) to start a family that will last a lifetime? Luckily, several professional athletes before Neely have done so successfully, many of whom she has already reached out to for advice. “So many great role models like Sara Vaughn, Stephanie Bruce and Kara Goucher have had babies and come back stronger,” Neely said. “That has been a huge source of relief for me, knowing that I have these resources. I’m grateful that they’re open and willing to share their experiences, because it helps me feel more relaxed and confident.”

Several professional runner moms took significant strides in their careers last year, each serving as a vote of confidence in one’s ability to not only return to professional running after pregnancy but to come back even stronger than before. While competing at the USA Track and Field Outdoor Championships last June, Sara Vaughn (who gave birth to her first baby in college and is now a mother of three) finished third at the 1500-meter final, scoring her first-ever spot on a world team. Marathoner Stephanie Bruce, who has been very open about her experience running through pregnancy and now has two sons, placed 10th in the TCS New York City Marathon’s competitive elite field last fall. Tina Muir, who for years battled amenorrhea, decided last spring to quit professional running to get pregnant and delivered her daughter last week.

“I have every intention of getting back to the sport after having the baby, but I don’t want to rush,” Neely said. Since learning of her pregnancy, Neely has backed off from her training schedule, running 4 to 9 miles each day instead of her typical marathon training distances. “I’ll try to continue running until it isn’t fun anymore. I’m definitely running much slower and shorter than what I’m used to in training.” Her diet has changed, too—in surprising ways. “Last week, I just wanted pie,” she laughed. “Each week I’ve had different cravings. One week it was grilled cheese and tomato soup. Then I was obsessed with macaroni and cheese. I have reverted to a 5-year-old in that I pretty much only eat grilled cheese, pizza and toast. I’m hoping that’s going to change and that maybe [my diet] will get a little better.”

So far, Neely’s biggest takeaway from pregnancy is to be open to all possibilities. “The best advice I’ve gotten so far is to have no expectations and take each day as it comes,” she explained. “So much of my life is so structured and organized. When I’m training and focused, I’m very type A; I have to do everything 100 percent. It’s been such a change of lifestyle for me, which has been exciting and scary all at once.”

Though she won’t race any time soon, Neely is determined to stay connected with the running community, both by growing her coaching business and supporting local runners training for spring marathons. “I love the sport,” she said. “Even though I’m not able to compete at a high level this year, I want to be involved at events, expos, races. As a professional runner who’s running 2:30:00 for the marathon, a lot of people can’t relate to that and my lifestyle, but being fit during pregnancy and becoming a runner mom is something so many women can relate to.”

Once her pregnancy was confirmed, Neely wrapped the positive pregnancy test and gave it to her husband for Christmas. It’s a touching gesture that speaks to how personal Neely’s decision is, and how important it was for her to make. “There’s nothing that compares to being a mother,” Neely said. “It’s something I would have regretted not doing. I’m trying to let my body rest and go through this different type of strain and stress. Once I have the baby, I’ll take the time I need to come back. I want to do it the right way.”

Congratulations to the Gracey family! Women’s Running is excited to check back in with Neely over the next several months as she continues pursuing a fit and healthy pregnancy. In the meantime, follow Neely on Instagram at @neelysgracey as she posts updates along the way.

Meet The Elite: Our Q&A With Neely Spence Gracey

15 Thoughts Of A Pregnant Runner From 4 To 40 Weeks