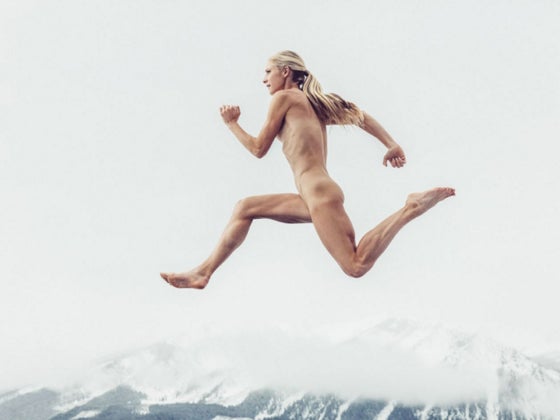 You know that nightmare where you show up at the start line for the biggest race of your life, you look down and you’re completely naked?

That nightmare (dream?) became a reality for Colorado-based steeplechase star Emma Coburn this week. Her photos were released as part of ESPN The Magazine’s The Body Issue 2016—and she toed the line at the premier American event of the year, the U.S. Track and Field Trials.

Naturally, the 25-year-old American record holder in the 3,000-meter steeplechase killed it in both arenas. The breathtaking photos shot by Marcus Eriksson showcased the body that Coburn has worked so hard to tune for her sport, a grueling race that forces runners to jump across staid hurdles and water jumps for nearly 2 miles. Eriksson captured Coburn’s athleticism by having her jump on a trampoline, mimicking the movement of jumping across a barrier as she does in her race. The beautiful backdrop? Coburn’s hometown of Crested Butte, Colo., where she ran in high school before moving to Boulder to attend the University of Colorado.

Coburn posted on Instagram that one of her favorite parts of the experience was the bathrobe.

Later, she shared with Competitor Magazine, “I think that The Body Issue is tasteful, beautiful and a once in a lifetime experience for an athlete to be a part of. I’m humbled to be included on the list of athletes who have been in it.”

After all of that exposure, Coburn still felt comfortable all alone on the last three laps of the Olympic Trials. After racing conservatively for the first half of the race, she made a move and left the rest of the field watching her ponytail swish back and forth as she ran to first place, her hands raised in victory as she crossed the line.