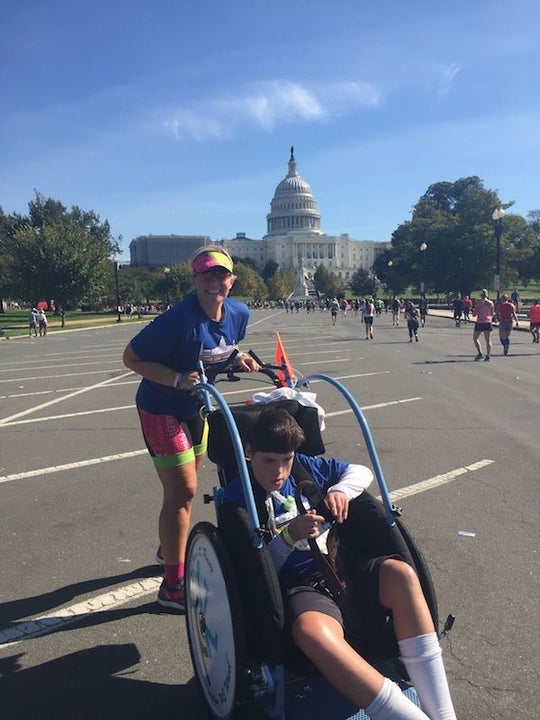 Last summer, I received an email from my friend Brent Pease from the Kyle Pease Foundation. They needed a race chair pusher for a 17-year-old, Logan, for a marathon.

I wasn’t sure why Brent was reaching out to me for this big task. I was a really slow runner. Sure, I had done Ironman triathlons, but I had never completed a stand-alone marathon. Not only that, but the race they wanted me to push was the epic Marine Corps Marathon.

While I knew of the Kyle Pease Foundation, I didn’t fully understand what the organization did or what it meant to be a pusher.

On the morning that the email came through, I was in a major running slump. I was on my way home from a terrible 5K, where I posted my worst time in more than three years. I realized that even if I had no idea what I was getting into, it had to be different than falling apart in a local 5K, so I said, “Yes, I’ll push Logan. Why not?”

I had a lot of questions and even more concerns about my ability to get the job done. Interestingly, Brent didn’t answer very many questions up front; instead he said, “Get running.”

Little by little, I began to train for the marathon. I hit my long runs, up to 20 miles. I couldn’t believe that my body was holding up, and I was actually feeling prepared for this event (which I can attribute to utilizing Jeff Galloway’s run/walk method). Still, I felt like I needed to knock on wood.

I met Logan in September, about six weeks before the race. He was a big boy, and the chair itself was another big boy, so I would be pushing about 200 pounds (not to mention hauling my own bodyweight). When I met Logan, I immediately felt a connection with him. He is nonverbal, but I could quickly understand when he liked something or when I irritated him.

After meeting Logan, I understood the “why” behind being a pusher and the importance of the Kyle Pease Foundation and these events. Through being a runner and pushing a disabled individual, we are able to take the focus completely off of ourselves. Up until this moment, I felt as if I were speaking about the Marine Corps Marathon with me as the athlete. How would I run? Could I finish the race, pushing 200 pounds?

After meeting Logan and his mom, Dana, I quickly realized what pushing was all about. I realized that it was Logan who was racing; I was just a way to get him to the finish line. Logan would borrow my legs for the day, as slow and lumbering as they can be, and he would finish his first marathon. Logan’s mom would let me borrow her most precious gift—her son—so he could have this experience. I was emotional when I realized the gravity of the event, and I felt even more driven.

On race day, Logan had a great time seeing the Capitol, the Washington Monument, the Wear Blue Mile and more along his first marathon course. He carries a belt with him as a soothing mechanism, and he hung onto it almost the entire race. But at Mile 25, Logan dropped his belt—and appeared to be in protest. Uh-oh, I thought.

I stopped, picked it up and looked at him. He folded his arms across his chest and put out a good, forceful huffing sound that I could read loud and clear.

I always wished I were a faster runner. On this day, I had never wished it more. Tears filled my eyes, and I apologized to Logan for my slowness. His sound and the belt dropping said, I have had enough. I nodded in solidarity and told him, “Me too, buddy. Let’s get home to Momma.”

I wanted to get Logan to the finish line as fast as I could. I ran even though it hurt more than any run has ever hurt. I talked to Logan and asked him to give me strength, to keep me going. He held on to his belt, and I swear he nodded.

As we rolled up the last bit of the Marine Corps course, lined with Marines, friends and family, I felt true happiness. Logan was a warrior. He literally ran with one of the slowest runners on the course—for almost seven hours. He was a machine. He was an athlete. He was a marathon finisher.

Logan and I rolled toward the charity village. We were greeted by two Marines who saluted Logan and placed the medal around his neck. I was so choked up that I was lost in the moment when one of the Marines saluted me and said, “Congratulations, ma’am.”