When Ali Eagle saw “Enter for a chance to run with Desi” in a Women’s Running email subject line, she didn’t hesitate to sign up, even it would mean cancelling her big plans the weekend of the race. The Brooklyn, N.Y., resident first heard of Desiree Linden in 2014. “That’s the year I ran the New York City Marathon, and she was the first American woman to cross the finish line,” she says. “I’ve followed her career and her Instagram ever since.”

According to the Rock ‘n’ Roll Marathon series, 3,000 people entered the contest (which was organized by Brooks Running and Rock ‘n’ Roll), and Eagle was randomly selected as the grand prize winner. She was flown with a guest to San Antonio, Texas, to race the series’ half marathon there. Not only that, but 2018 Boston Marathon champion Linden spent the whole weekend with the winner, including running every step of the race with her. The prize also included a stay at the Westin Riverwalk, round-trip car service transportation in San Antonio, a Brooks shopping spree and lunch with Linden.

Once she found out she had won, Eagle cancelled her plans in New York for the weekend, invited along her friend, Jess, and flew down to central Texas for the race, her first Rock ‘n’ Roll-branded event.

Eagle knew her friend would enjoy the trip just as much as she would. “Jess is the friend who, like me, goes out to watch the New York [City] Marathon every year just so she can see the elites pass by, so I knew she’d be excited to meet Des,” Eagle says. “I also knew I could call her and that she would be able and willing to run a half marathon without much notice. … This trip was a great running retreat for us.”

Linden was looking forward to the weekend as well—she won the San Antonio race last year, and after her sixth-place finish at the TCS New York City Marathon in November, she says she “knew I wouldn’t be able to bounce back and compete but really wanted to find a way to be involved with the event again.” When Brooks and Rock ‘n’ Roll presented the sweepstakes idea to her, she was “all for it.”

Once she arrived, Eagle was amazed by how much time she was able to get with Linden. Friday included lunch, the press conference and VIP reception, Saturday had them handing out medals to 5K finishers together and Sunday they enjoyed a VIP breakfast, the race and then post-race drinks on a rooftop patio. “Any one of those events would have felt like a grand prize on its own,” she says. “All together, it was the experience of a lifetime.”

Linden says her “biggest fear” was an awkward interaction with a fan that she’d have to spend that much time with, but “it wasn’t awkward at all,” she says. “I’m not an extrovert by any means, but Ali and her guest, Jess, were both so easy to get along with and interesting and entertaining that none of this felt like work or difficult in any way. I was genuinely excited to get to spend time with them and hear their stories and share my own.” 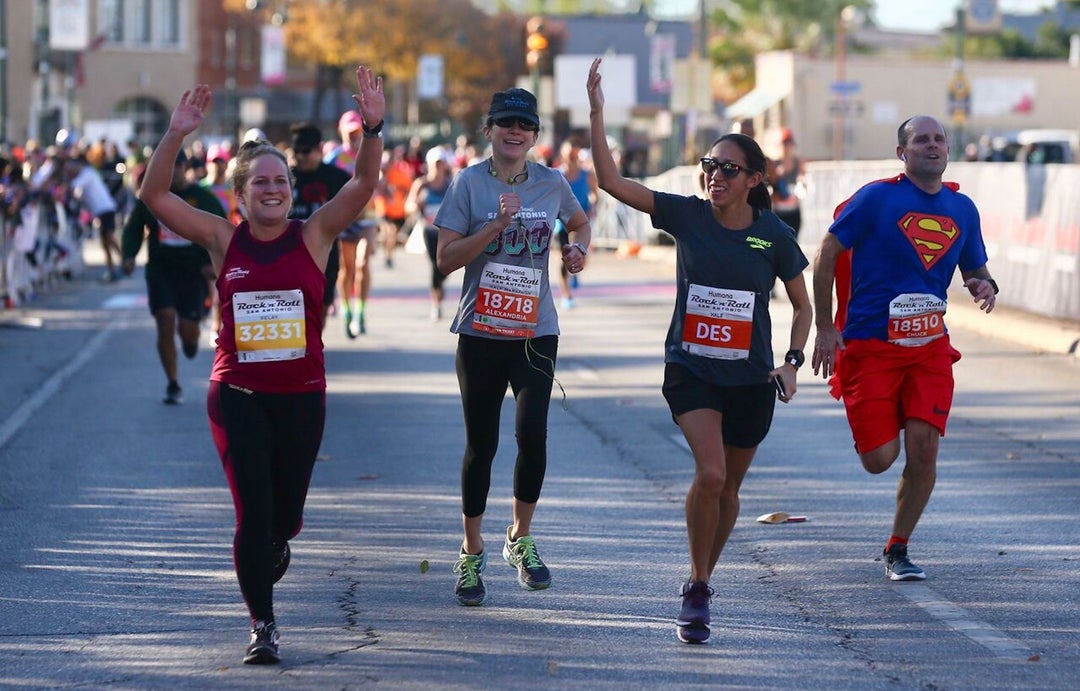 Throughout the weekend, they got to talk about Eagle’s running goals (she’s aiming to run a marathon in every state—she’s at 38 so far) and the ups and downs of running. “It was fun for us to chat about that and recognize that it’s a fairly normal experience at every level,” Linden says. “She’s a super balanced person, and running is not life-consuming, so chatting about other passions outside of running was really fun and easy.”

And if you’re a Linden fan too, you will be glad to know that what you see is what you get with Des. “I’ve been in the film industry for 12 years, so I’ve met my fair share of famous people, and more often than not they’re disappointing,” Eagle says. “What’s so great about Des is that she’s exactly what you hope she’ll be—she’s smart, hilarious, calm, humble, gracious. She’s the kind of person you can keep on a pedestal even after you’ve met them.”

The race itself was “a blast,” Linden says, and Linden stayed in step with Eagle every step of the way (except for a few seconds when she stopped to take a selfie with the Stay Puft marshmallow man, Eagle says). Having a world-class marathoner running by your side is super motivating and helped Eagle get through the final miles. “I was not about to embarrass myself and walk in front of her!” Eagle says. “When things started getting tough in the last couple of miles, I asked about the Olympics and some of the other elite runners—her stories could have pushed me through another 13.1.”

And Linden noticed a change in Eagle: “Ali really hit her stride in the last few miles, and it felt like she was going to finish strong not just at the event but was going to use the momentum to reinvigorate herself in checking off some of her bigger running goals.”

Plus, Eagle got to take home more than just her finisher’s medal and the memories she made in San Antonio. “At the end of the race, Des signed her bib and gave it to me,” she says. “I’m not sure if she’ll ever know how much that meant to me. … That bib is now the first thing I see when I open my eyes, and it’s just so amazing to see it and think, ‘Wow, it wasn’t just a dream.’”