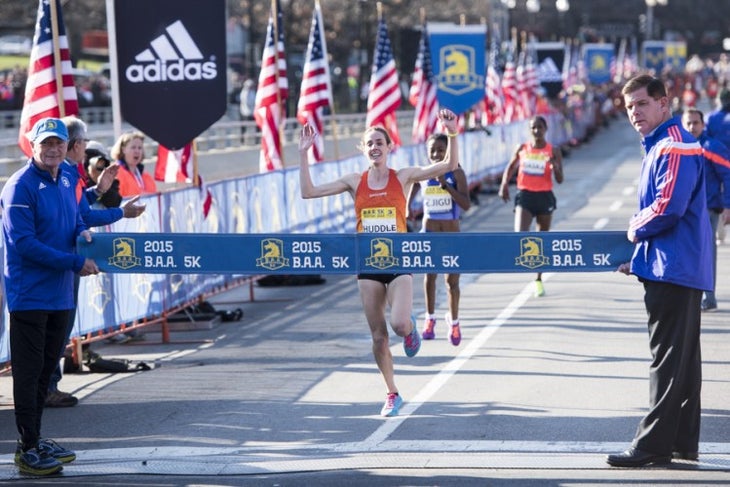 Reigning U.S. 10,000-meter champion Molly Huddle will make the jump to the marathon for the first time in her career when she makes her highly anticipated 26.2-mile debut at the 2016 TCS New York City Marathon on Sunday, Nov. 6, it was announced today.

“Molly is one of the most gifted runners in the USA, and she’s already had fantastic success in NYRR races on the streets of New York City,” Peter Ciaccia, president of events for NYRR and race director of the marathon, said. “She joins an amazing group of women who have made their marathon debuts in New York City, from American stars, such as Deena Kastor, Shalane Flanagan and Kara Goucher, to global greats, such as Grete Waitz and Mary Keitany. We are thrilled to have Molly take the next step in her running career in New York this November, and are excited that it coincides with the introduction of our USA division prize purse.”

Huddle, 31, resides in Providence, R.I., and she is the two-time defending champion in the United Airlines NYC Half, having won the 2016 event by 8/100ths of a second against Kenya’s Joyce Chepkirui. She broke her own event record and American record for an all-women’s race in the process, clocking in at 1:07:41. She is a 21-time national champion who competed over 5,000 meters at the 2012 London Olympics and will try to earn a ticket to the 2016 Rio Olympics at the trials next month. Last year, she won six national titles—5K, 10K, 12K, 10-mile, and 20K on the road and 10,000 meters on the track. She also finished fourth in the 10,000 meters at the world championships.

“It’s with excitement that I am going to run my first marathon this fall, and I am honored and delighted to do so at the TCS New York City Marathon,” Huddle said. “As a native New Yorker and someone who has watched my training partners race through the city many times in the past, I felt like New York has been calling to me for many seasons.”

She added: “It feels like running a marathon is a rite of passage as a distance runner, and with my strength work going better than ever, I finally feel ready to tackle that distance on a course and in a city whose grit and vibrancy inspire me. I always love running NYRR races from one mile up to 13.1, and by now the city feels like a home course.”

In running as an NYRR Team for Kids Ambassador, Huddle will represent the organization’s charity running team, a committed group of more than 1,700 adult runners from around the world who add meaning to their miles by raising funds for NYRR’s free youth running programs. The programs serve more than 200,000 kids locally and nationally, including more than 120,000 in New York City’s five boroughs.

“As one of the great American long-distance runners, Molly serves as a role model to kids across New York City’s five boroughs, the country and the world. New York Road Runners is honored to have her as a Team for Kids Ambassador,” said Michael Capiraso, president and CEO of New York Road Runners. “Molly is an inspirational role model for the next generation of runners, and her commitment to youth will have a profound impact on NYRR’s free youth running programs for years to come.”