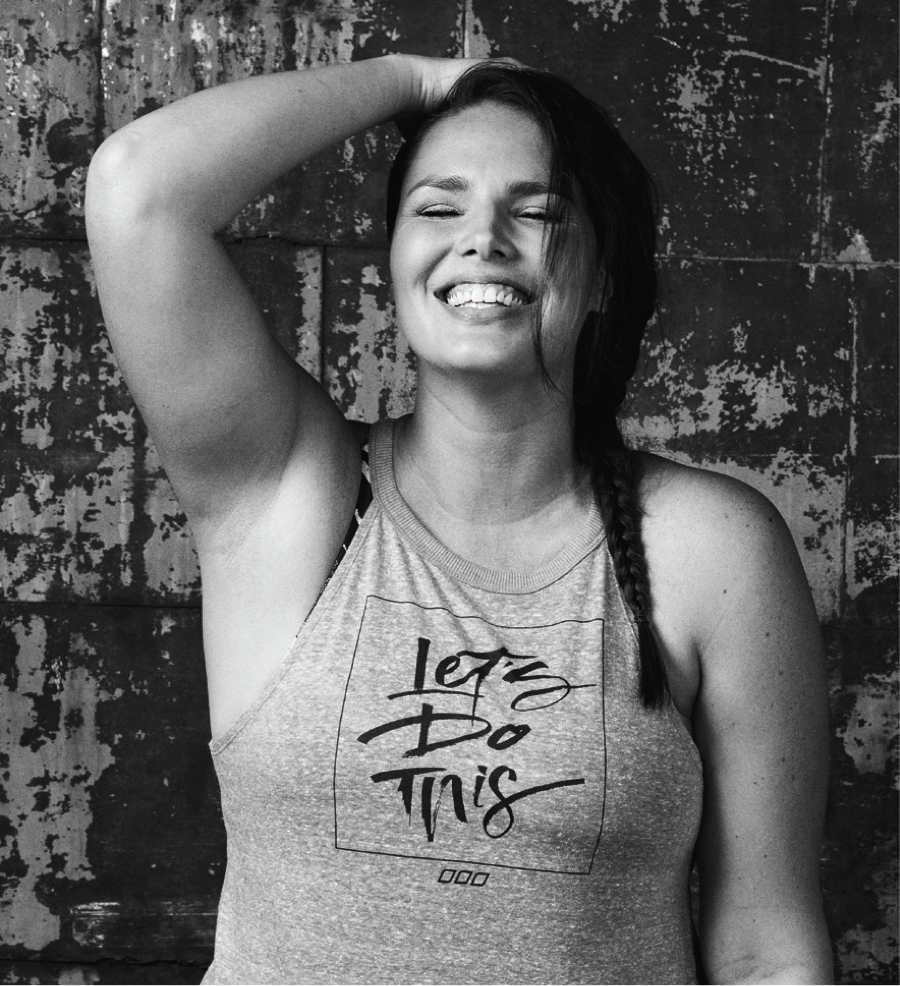 Less than a year ago, Candice Huffine was sitting next to her husband, Matt Powers, over a meal in Ibiza, Spain. Powers, a longtime runner, was trying to persuade his wife to register for a race, but she wasn’t positive the sport was for her. Huffine explains she felt no real desire to be anything more than “a very fast walker with an occasional trot.”

Looking at a wooden table, Powers pointed out two knots on either side. “This is where you are now and this is the New York City Half Marathon. If you just make it your goal, everything else will fall into place.”

Huffine wasn’t sure. It’s not that the Brooklyn native lacks confidence. She’s one of the most sought-after models in the world and at the very top of her game for what the industry calls “plus size.” Her beaming personality comes through in body-positive Instagram posts. A photo of Huffine holding up her shirt reads: “‘Do you see those rolls?’ —social media troll; ‘Welcome to the bakery, honey. —Candice Huffine.’”

Still, the thought of running a half marathon felt overwhelming. When considering a race in the past, she had always told herself, I’m too busy, I’m always traveling or I work too much. Plus, she wasn’t sure where to start. How does a person go from zero to 13.1 miles?

This time, though, something clicked. Powered by the desire to test her mettle, Huffine set an objective of running the half in March 2016. She even made a New Year’s resolution to stop letting intimidation be a factor in her life.

In preparation for the New York City Half Marathon, Huffine teamed up with a coach and stuck to a training plan. She started small, just a few miles at a walk/run pace. She worked her way up to running four days a week and her longest run of 8 miles leading into the race.

“I went from nothing. I was very slow and would walk occasionally,” Huffine remembers. What was initially a love-hate relationship has transformed into an integral part of her existence, even more so when she crossed the finish line at the half with tears in her eyes. 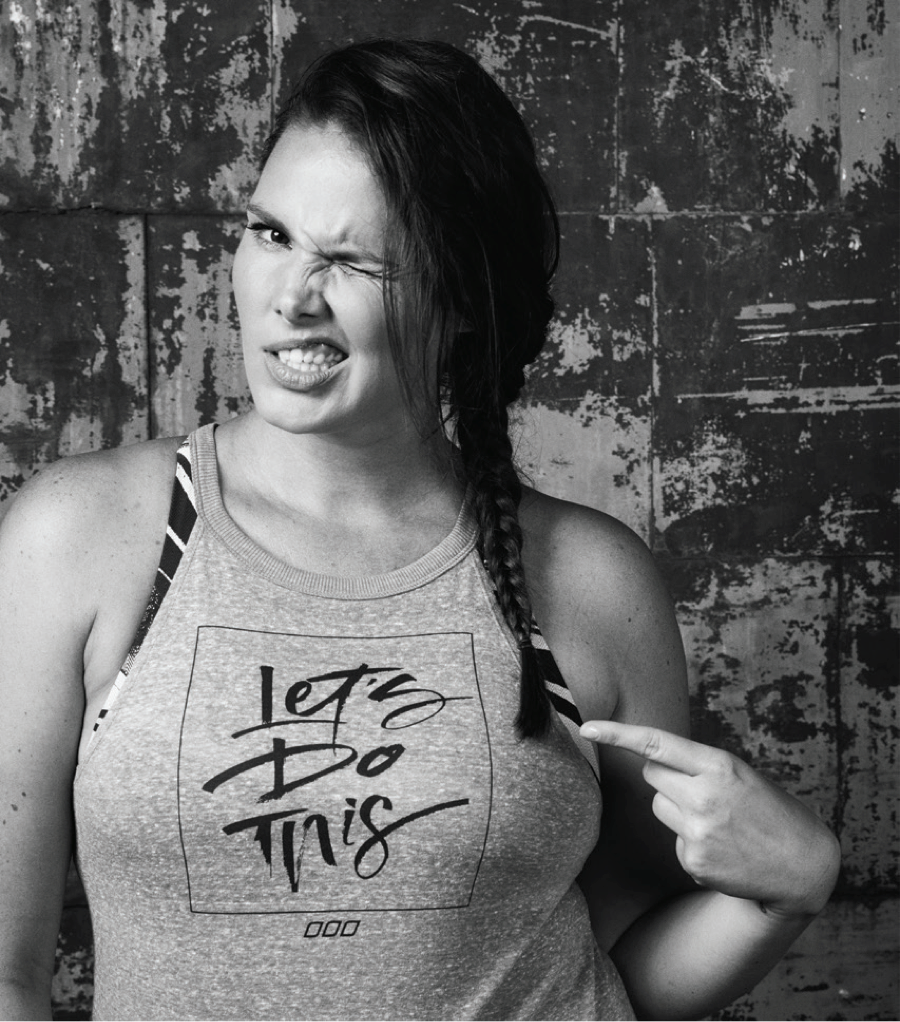 Huffine was hooked on the sport, committed to keep running as a consistent part of her routine. She watched her life change in small ways: skipping boozy brunches so she could sweat instead and never traveling without her running shoes in tow.

The model’s career takes her all over the globe. After moving nearly 16 years ago from her hometown of Bowie, Md., to New York City, the 32-year-old has graced the pages of Vogue, Harper’s Bazaar and W and has appeared in major commercial campaigns.

Running and all of her travels go together well. “[It’s] one of the best ways to explore the city you’re in,” she says. “I feel good mentally, not just physically. It makes me so happy and brighter and sharper. That’s a feeling that I crave all the time.”

Recently while on assignment near Mont Blanc, France, Huffine opted to lace up her kicks when she wasn’t on set for a photo shoot and escaped to a glacier stream next to a snowcapped mountain. “You can have a lot of fun running,” she says with a laugh.

Huffine’s reason for running extends beyond herself—she wants to shift stereotypes too. “When it came to doing the half marathon, people immediately thought that I was trying to change my body—that I no longer wanted to be a curvy woman,” Huffine says. “And that I was starting to implement this new active lifestyle in order to completely change the way I look and be a different person.

“I come from the plus-size modeling world, where body image is a huge topic. Breaking down barriers is what  I’ve been trying to do for my whole career. Curvy women should be in media. Curvy women can be on TV. We can wear amazing fashion. We belong. We are needed. It’s vital for women to see diverse women that they can relate to.”

This carries over to the running community. One doesn’t have to look a certain way or run a certain pace to call herself a runner. What matters is getting out and trying it, Huffine says.

Now she wants to encourage others to get out and run, through Project Start, a storytelling initiative she devised in conjunction with Women’s Running. With the help of four ambassadors,  Project Start shows how runners took their very first steps with the hope of inspiring people who have never run before (follow #psyougotthis on Instagram).

“We all start somewhere,” Huffine says. “Most people don’t step out the door and finish number one in a race. I’m sure that exists somewhere, but that’s not the reality of most people’s experience.

“What I’m trying to do with Project Start is show the real side of running. It’s for every woman at the stage they’re in right now. You don’t have to wait for this perfect moment to label yourself as a runner. You can be one right now.” Huffine wants to create a supportive community in which women can see their progression in mileage, “but also in feeling and spirit,” she adds.

“It’s resonating with people. There are women on there who did a morning run of one-and-a-half miles at a 16-minute pace. They’re trying,” Huffine says. “I think other people need to see that in order to get out there.”

Huffine says when she began to train, it was helpful to understand that not every runner is a marathon runner—and certainly isn’t one right out of the gate. Rather, it’s a long progression, but one that’s possible with the right support and motivation.

“There are hard days. I still have my struggles. I’m not perfect. I’m not fast,” says Huffine. “But I need running to show other women what they can do for themselves, what it can look like and how they can feel.”

Molly Huddle is ‘Keeping Track’ of Women in Sport