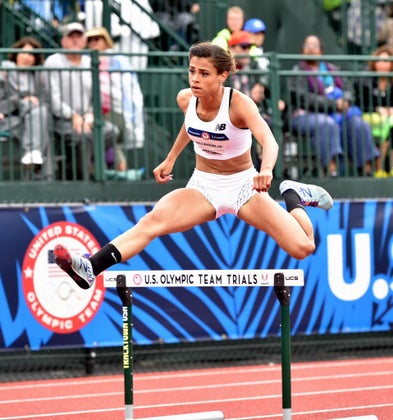 Most competitive 16-year-old runners are focused on their high school track meet, worried whether they’ll be able to beat a rival or qualify for the regional meet. But Sydney McLaughlin woke up Sunday morning wondering if her training was tight enough to allow her to beat the best 400-meter hurdlers in the world.

On the final day of the U.S. Olympic Trials, the high schooler from Scotch Plains, N.J., lined up against eight woman with many years more experience, with the goal of finishing in the top-three to earn a spot on Team USA. Not intimidated by the fact that she was shoulder-to-shoulder with professional athletes, McLaughlin shot out of the blocks, leaping over the barriers as she blazed around the track, holding off five women behind her by less than a second.

Her incredible time of 54.15 seconds (an extremely good time for a high school girl to run in the 400 without any hurdles involved) set a new world junior record. It was also good enough for third place behind Nike athletes Dalilah Muhammad and Ashley Spencer (pros age 26 and 21 respectively).

The last time a runner this young made the Olympics was back in 1980. All smiles post-race (of course!) McLaughlin summed it all up: “To be 16 and going to the Olympic is just incredible.”