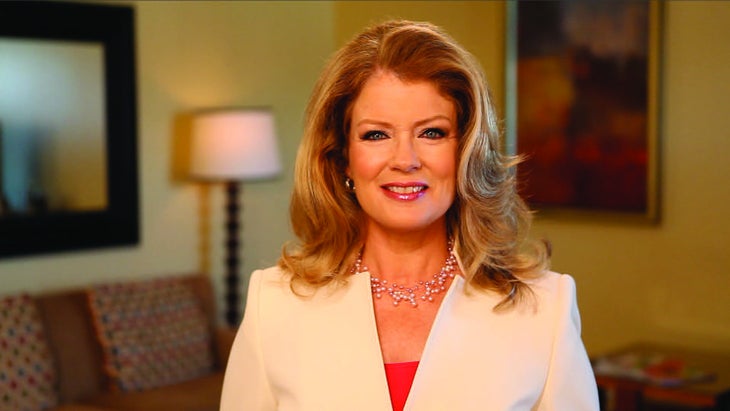 After moving to California in 1979, Mary Hart often ran through the tree-lined streets of Westwood with a single goal. “I imagined that one day I would be successful enough to buy a house there. I always had this mantra running in my mind,” she says.

During none of her workouts did Hart guess that, more than three decades later, she would break the Guinness World Record as the longest serving entertainment news host, thanks to her 29 years of success on “Entertainment Tonight.”

And now that she can afford a house in Westwood (many times over), Hart runs with a different goal in mind—paying it forward. As the national spokesperson for the Edith Sanford Breast Cancer Foundation, Hart has devoted herself to forwarding the organization’s mission of breast cancer prevention and treatment through the use of genomics. Hart participated in the Women’s Running Series 5K in San Diego for Edith Sanford (the race’s charity partner) in February.

“It’s hard for me to think of anyone who hasn’t been affected by breast cancer. It’s so pervasive,” says Hart. The former anchor’s grandmother passed away from breast cancer when her mother was young, and Hart’s mother suffered from a rare form of the cancer in her 70s—but has since recovered and is doing great. Because of her family’s history with breast cancer, Hart says that she’s had some testing done and regular mammograms but thankfully has never had any incidents.

Aside from a deep personal connection to the cause, for Hart, the marriage of fitness and disease prevention is a natural pairing. “The discipline of a regular workout is so fundamentally important,” she says. Hart once ran up to 7 miles a day, but due to knee issues—“they talk back to me”—she now runs less and incorporates low-impact activities, like walking, hiking and skiing, into her routine.

Hart says that working out has helped her not only stay fit, but also stay sane. Soon after stepping down from her position at “Entertainment Tonight” in 2011, her son went away to college, leaving the former host with an empty nest and a void during her days. It was then that “workouts became vitally important in getting perspective,” as well as alleviating feelings of stress and anxiety.

On days Hart has trouble mustering the energy for her workout, she sometimes thinks of how good she’ll feel afterward. During the Women’s Running Series 5K, however, her motivation will be focused on her family. “I’ll be running for my mother and for all the times she said to me how she wished she got to know her mother…I’m running for a cause that matters.”

On eating right…“I’ve always loved eating fresh fruits, vegetables and grains. It makes a big difference in your ability to focus.”

On mid-run entertainment…“I almost never listen to music. I like to watch the news [on the treadmill].”

On races…“There’s a camaraderie that is infectious that allows you to run farther or walk faster than you could if you did it alone.”