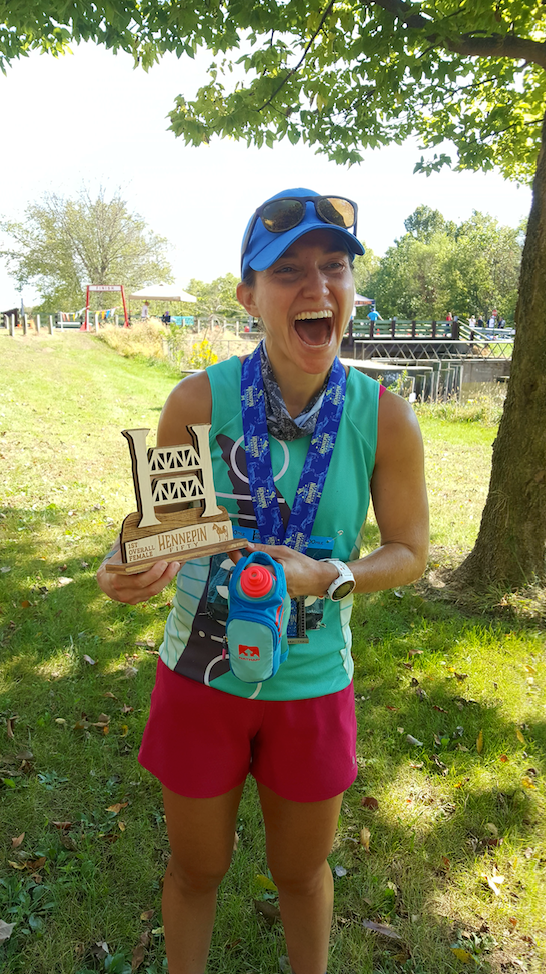 I made it official a few months ago by registering, and I started training shortly thereafter, but this is the first I’ve written about my next big running adventure: an ultra-marathon! Even though I’m blowing right past 50k to the 50-mile ultra-marathon distance, I still feel like I’m easing into the ultra world by running a fairly flat race on non-technical terrain—The Hennepin Hundred. As I’ve shared my ultra-marathon goal with people—coworkers, friends, family—a few common reactions have emerged, so I’ll share my responses:

Yes, all at once. But there are aid stations to refill hydration systems, get more food, manage first aid, etc. And I might walk for parts of it!

A lot of people think marathons are crazy, and I’ve done 19 of those… Also, 50 miles is ‘just a half’ at The Hennepin Hundred!

Wow, you’re jumping from the marathon distance to a 50-miler, without doing a 50K first?!

I worried that a 50K wouldn’t shift my mindset enough from marathon training. 50 miles is enough to scare me a little… or a lot.

Despite some great successes at the marathon distance in recent years, I was at a mental and emotional plateau with marathon training. I’m a creature of habit, and I have a strong Type A personality. It’s easy for me to fall into the trap of expecting a linear progression of results. If I had success following this 16-week training plan, I will have further success by following it again. If I ran those workout splits in that successful buildup, and I’m running the same workouts with faster splits, I will run a faster marathon time. This thought process is clearly rampant with logical fallacies, mainly because it is rife with assumptions—about the time of year (season, weather, holidays, etc.), about the other sources of stress in my life, about the terrain and weather on race day, about my body’s durability, etc. Sure, benchmark workouts can be used to gauge fitness, but training and racing don’t happen in a vacuum, and progress isn’t always linear. I’ve known this for a while, but I couldn’t make myself truly believe it, at least not while continuing to train for one marathon after another. I needed to shake things up. I needed to dive into the unknown. So, in March, I took the plunge and registered for The Hennepin Hundred.

The Physical Journey To Hennepin

Over the next couple of months, I steadily rebuilt my aerobic base following a February marathon and recovery period. In the spirit of trying new training tactics, increasing my strength and mobility, and keeping my pace comparisons in check, I entered several 15K trail races around central and southern Indiana, ran a trail half-marathon, and I even picked up a brand new hobby—indoor rock climbing! I also did a lot of ultra-marathon homework. I filled my brain (and the Notes app on my phone) with tips, tricks, and warnings from podcasts, books, blogs and discussions with veteran ultrarunners.

In June, I started focusing specifically on ultra training, building my long runs while maintaining speed and endurance workouts during the week. I began testing hydration systems, and I think I’m on Team Handheld as opposed to Team Vest—but there are still a few weeks to change my mind! I also began trying “real” food on the move, eating energy bars and sandwich bites in addition to the trusty gels that I’ve used in marathons. I calculated my sweat rate in the midst of the hot and humid Midwest weather, and learned that I had been vastly under-hydrating on my long runs for years of marathon training. I plan to do a sweat rate test at least one more time in the coming weeks, once the weather calms down to something hopefully more autumn-like as race days approaches!

The Mental Journey To Hennepin

As I’m training my body, I’m also training my mind, not only to work with me (not against me) for hours upon hours of running, but also to shift my mindset of what a successful run looks like and feels like. A year ago, or even six months ago, a 22-mile run at an average pace of 8:05 would have crushed me. I would have been distraught that my pace wasn’t at least 45 seconds faster, regardless of the weather, the circumstances of the day, and the context of training. I would have convinced myself that I was out of shape, that I should give up whatever marathon time goal I had, that maybe I should give up running entirely. But that 22-mile run at an 8:05 average pace at the end of July was my first test with a handheld bottle, it was at the end of a tough week of training in the oppressive humidity of New Orleans, and it was just the start of increasingly long weekend runs. Since then, I’ve redefined my running success in a variety of ways – feeling fresh after increasingly long back-to-back weekend runs; finding joy in Monday rest days; maintaining a calm stomach as I test new foods and fueling tricks while running (ginger chews, for the win!).

I am gearing up for the final weeks of heavy mileage before I start my taper, and I am thrilled to feel healthy and strong. I can’t wait to test myself and learn more about my physical and mental capabilities over the coming weeks, and especially on race day. It’s going to be one heck of a great day along the Hennepin Canal!

Editor’s Note: Her training worked, and Sarah Overpeck set the 50-mile course record, with a very respectable winning time of 6:55:21. This was Sarah’s first ultra-marathon.