It isn’t hard to be inspired by the top three finishers of the Olympic Marathon Trials, held this past weekend. They each embody the strength and grace that Women’s Running magazine celebrates (not to mention their killer abs!). Even better, is the camaraderie that is evident and shared between the competitors. Over 150 women of all ages competed for three spots on the USA’s 2012 Olympic Marathon Team. Held in Houston, TX, the flat 26.2 mile course featured a 2.2 mile loop through downtown before heading out on an eight mile loop that repeated three times before the finish line. Women’s Running magazine editor-in-chief, Jessie Sebor, attended the trials and will give our blog readers an insiders view later this week (stay tuned!). . .

30 year-old Shalane Flanagan of Portland, OR won the trials (this was only her second marathon!) with a finishing time of 2:25:38. Flanagan shaved more than 3 minutes off her personal record and made USA Olympic Marathon Trials history with the fastest women’s finish time ever. 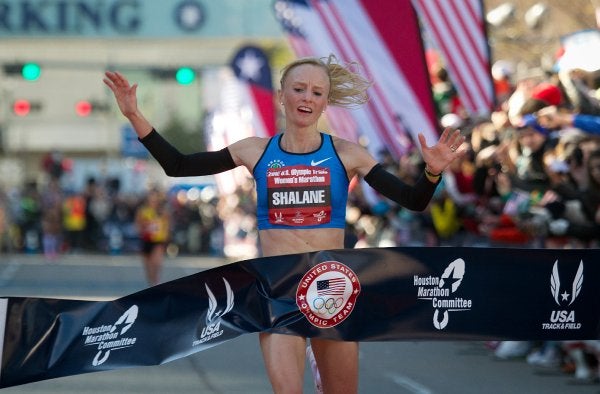 Desiree “Desi” Davila, 28, of Rochester Hills, MI finished 17 seconds behind Flanagan with a time of 2:25:55. New mom Kara Goucher, 33, of Portland, OR finished third with a time of 2:26:06 and secured the final spot on the USA’s Olympic Women’s Marathon team.

After crossing the finish line, the top three women embraced and shared an endearing moment with each other. It’s hard to watch them and not be inspired by the honest respect and admiration they share amongst competitors. So, on this Monday, we celebrate Flanagan, Davila and Goucher and thank them for motivating us to push harder and run stronger.

How will you run stronger on this Monday?