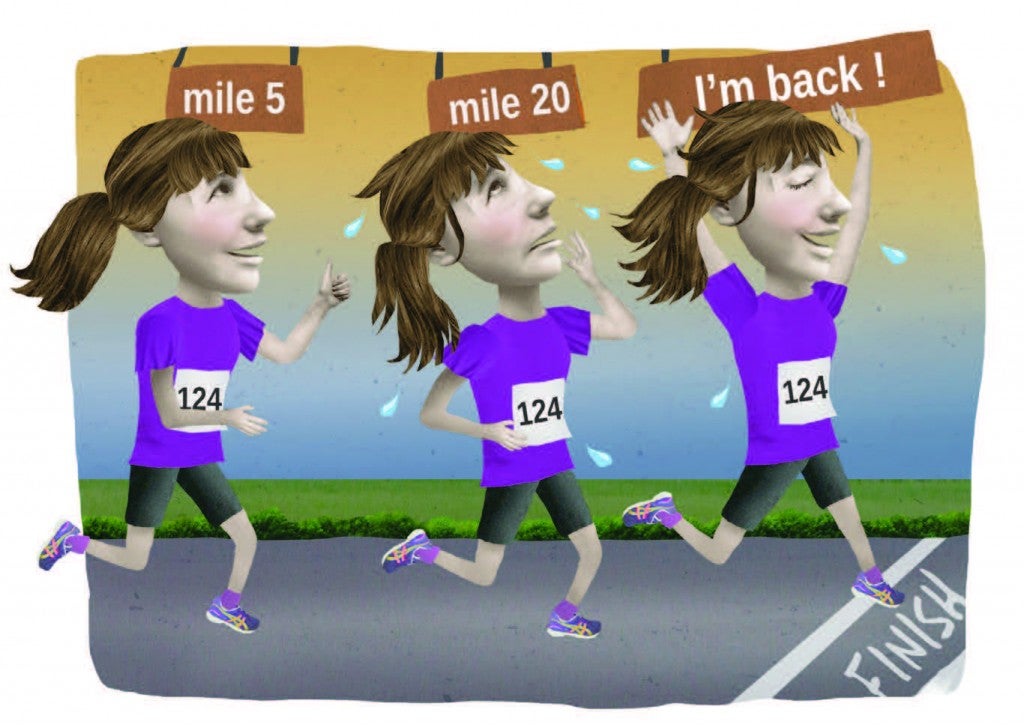 Even though she’s raced nearly 50 marathons, when our Marathon Maniac toed the line of her first 26.2-miler following back surgery, she wasn’t sure if she would even cross the finish.

It had been a long time since I’d been nervous before the start of a marathon. As someone who has run enough 26.2-milers to be comfortable with the distance (and because I do races almost purely for fun), I normally toe the start line relaxed and happy. This time was different.

Standing in the crisp October morning air, it was hard not to let the magnitude of what  I was about to attempt weigh too heavily on my shoulders—the way I’m dramatizing this moment, you might think I was about to try to qualify for the Olympic Trials or the Boston Marathon, but no. My goal was simply to finish.

Last April, I underwent back surgery. I flew out to Colorado to be operated on by a neurosurgeon who specializes in athletes. My doctor was confident that I would run again, but with another surgery ahead of me in the future, he didn’t promise me a lifetime of unlimited races.

I’ve spent a good portion of the last three and a half years running marathons (45 of them, to be exact). I blog about it. I write about it. I eat, sleep and breathe the travel and camaraderie. To think that could be taken away from me was devastating, so on Oct. 12, I set out to take it back.

To say I was undertrained and overanxious would be huge understatements. But about a week earlier, I had an epiphany: I had done as much as I could. The race would go how it would go. There was no point in dreading it, thus making it miserable. Maybe I would finish it and maybe I wouldn’t. All I could do was try.

As I attempted to counter my doubts with realism, my thoughts during the race went something like this:

Start: Okay, here we go. Nothing to it but to do it! Ugh, I can’t do clichés for 26 more miles.
Mile 5: I love running! Running is easy! This is the best! Look at me, remembering to fuel on time!
Mile 10: We’ve run double digits! I’ve got this!
Mile 16: The farthest I ever ran in training is 16, so it’s okay if I start to feel a little tired. It’s a marathon, so feeling tired would make sense.
Mile 18: I think my heart might explode. Maybe I should have done more cardio.
Mile 20: Marathons really should stop at mile 18.
Mile 23: I’m probably going to actually punch the next person who tells me I’m “almost there.”
Mile 26.2: I did it! Holy crap!

If I were a person who cries, I would have sobbed at the finish line. This race meant more to me than my personal best. Outside of my first marathon, it meant more than any other race I’ve ever done. And maybe that’s significant. In a way, it was my first marathon—just in this new chapter of my life. I realized that our nerves aren’t always a bad thing. They’re a reminder that you’re about to do something exceptional.

CHILL OUT
Our Marathon Maniac’s best tips for keeping your cool mid-race.

Be Realistic: It’s okay to be tired and sore at mile 22, so don’t get down on yourself. You’ve run 22 miles! If you’re achy just a few miles into the race, you may want to reassess your pace.

Soak up the Atmosphere: Not every race has crowds like NYC, but there will be kids wanting a high-five, beautiful scenery or a funny sign pretty much everywhere. Take it all in.

Keep it in Perspective: It stinks when you realize you won’t make your goal, but in pretty much every case, there’s always another race to try. And hey, you still get a medal!

Danielle Cemprola lives in South Carolina with her Rottweiler, Rocket. When she’s not running, Danielle blogs at trexrunner.com.

Jordan Hasay is “Raring to Go” for the Boston Marathon