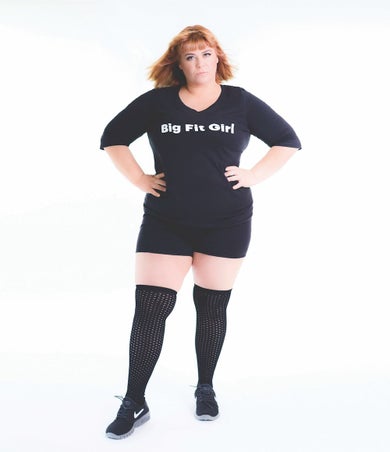 Excerpted from Big Fit Girl: Embrace the Body You Have by Louise Green. Published by Greystone Books, March 2017. Condensed and reproduced with permission of the publisher.

In my early 20s, this was my life: I drank alcohol excessively, smoked cigarettes and regularly ate greasy Chinese food from the mall food court. I was mostly sedentary. I worked a desk job, and my evenings revolved around my couch and several glasses of wine. The only time I exercised was in fleeting three-day bursts in an attempt to fix my unhealthy lifestyle.

Most days I woke up hungover. As I pulled myself out of bed, my body felt like it weighed a thousand pounds. I would take a long shower to try to wash it all away—the nicotine that lingered on my skin, the feelings of self-hatred, the fatigue. Standing in front of the mirror, I would ask myself: “How did I get here?”

I had always dreamed of being a runner, even though I had never witnessed a woman like me achieving athletic feats. I found a local running program and resolved to reach for my athletic dreams, no matter what it took. This was the first step. Though I didn’t have a role model for an athlete in a bigger body, I was determined to find her—or to create her. I didn’t have to wait long; I only had to look in the right place.

I signed up for a “Learn to Run a 5K” group offered by my local running store. My desire to change my life had become stronger than my desire to stay in my comfort zone, and a new identity was brewing. There was a reckless fitness girl emerging who was finished with wallowing at rock bottom. She was ready to go to any lengths to pursue her athletic dreams. Reckless fitness girl was trying to break free, while my old self was trying to take cover. As my two identities grappled, I was gripped by a tug of war between fear and excitement for change—but eventually reckless fitness girl triumphed and began to occupy my being.

As the start date for 5K training drew near, my anxiety mounted. My heart raced, my breathing was labored and the tension in my shoulders was almost unbearable. What if I was the biggest? The slowest? What if I couldn’t keep up? But reckless fitness girl wouldn’t listen to the negative voice desperately trying to persuade her to stay home. She pushed through, and I arrived there that first night, determined to try even if I felt like an impostor in my running clothes.

Just as I was about to take my seat among the runners crowding the store, a woman stood up in front of us and introduced herself as our run leader. When I turned my gaze toward her, I was shocked to see a plus-size woman decked out in running gear. Her name was Chris. When I looked at her, I saw an icon, a rock star and a total game-changer. My crippling fear melted away; I was not alone. That night, as we hit the streets for our first run, I caught a glimpse of what was possible. Not only did I make it through the run (and not die!), but on the way home I couldn’t stop smiling. Chris never mentioned body size or weight loss. We were all athletes to her, on a mission to run hard, run strong and run for healthy outcomes. Her passion for running was inspiring, and she taught me that by showing up and being there that first day, I was the only thing holding me back.

5 Important Signs That You Suffer From A Distorted Body Image