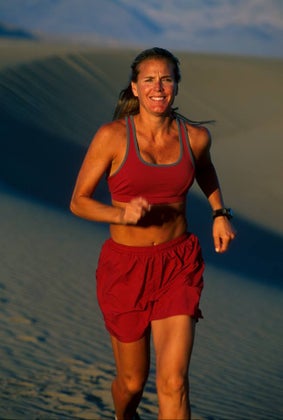 Lisa Smith-Batchen felt a chill in the air last Sunday morning on Santa Monica pier. The sun was just hinting over the horizon, casting a pale warm glow over the blue-grey waters of the Pacific coast. The ultrarunner gathered her crew and friends who had shown up for her run into a tight huddle. The anticipation was high; you could tell something big was happening.

The team said a prayer, arms around each other. The waves lapped gently against the sandy beach. The Ferris wheel and roller coaster of Pacific Park stood motionless in the distance. The early morning moon hung gracefully over the ocean.

Lisa started running at exactly 6:12 am. She touched the waters of the Pacific with her foot, turned around and headed east along Pico Boulevard towards downtown Los Angeles. She was joined by a small group of runners and friends, local residents, who had heard about her project to run 3,100 miles all the way across America and decided to dedicate their morning miles to keeping her company. Some of these people even donated gift cards to Lisa and her crew, including gas cards to help fuel up the RV that the crew rode in and that operates as a mobile aid station—home for the next 50 days or so, restaurant gift cards, and much-appreciated Starbucks gift cards for an extra boost of energy in the morning.

By the time she reached the steps of the Los Angeles City Hall, the sun was radiant in the clear blue sky. Lisa ran along sidewalks, by auto shops and restaurants, cafes and convenience stores, parks and bus stops.

By late afternoon, Lisa’s stomach started doing cartwheels. Nausea set in. A strange reaction to the heat and the nerves of the day, perhaps. But she was in high spirits. She was eating well—a potent mixture of salty carbs and high-fat, calorie-dense fare in the form of crackers, sandwiches, avocado, and cheese. Lisa slowed down a bit and powerwalked to deal with the GI distress. Her crew helped her cool off in a chair on the side of the road. Gradually, the stomach issues went away.

Just outside of Los Angeles, near El Monte, Calif., Lisa and her crew missed the turn off and took the wrong road off course for about a mile. It was a frustrating mishap, but these things are best handled with good humor: all part of this crazy journey! With a what-can-you-do-about-it chuckle, Lisa turned back around and continued to the route.

She was joined by her friend and fellow endurance athlete, Grant Maughan. Grant, an Australian native and ship captain by trade, has accomplished his fair share of running feats, including the Marathon des Sables stage race in the Sahara, the Brazil 135, the Badwater Ultramarathon, the Arrowhead 135, and the Spartathlon in Greece. He is one of the best endurance athletes in the world, and he and Lisa share a shorthand vocabulary that allows him to understand what she is going through and to motivate her with his friendship. Grant ran alongside her, until they reached her first day stopping point at 58 miles in the town of Ontario, California.

It was a good day. Now Lisa could spend the night in a hotel bed. She was getting into the swing of things. There is a long road ahead, she told herself, and there is plenty of time to let it all soak in. The journey has begun.