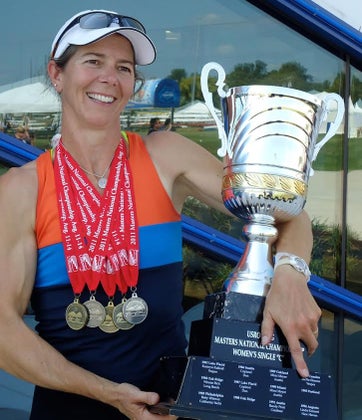 Today, women like Serena Williams, Ronda Rousey, Danica Patrick, Emma Coburn and the final five Olympic gymnasts dominate the world of sports. With their physiques packed with power and drive filled with the desire to win, very few hold a light to these women, and so many others, who have paved today’s current path of women in sport. However, it’s also important to note that this path has been possible barely in the last 40 years. With feminist movements and more outspoken women leaders at the forefront of our society than ever before, it can be easy to forget that there was once ever a time in sport where women weren’t allowed to compete on the same stage of men; before Title IX passed, women were not afforded those opportunities.

Kris Miller—eight-time World Duathlon Championship runner and silver medalist for the National Triathlon Championships, was part of the Title IX generation of female athletes in Minnesota—and she knows first-hand the struggle of a woman trying to make it in a man’s world.

“A lot of young girls do not know what Title IX is and don’t appreciate [why] they can play sports,” explains Miller. “You don’t want it to be taken for granted and forget that women really had to fight for the right to play.”

Title IX was passed in 1972. The amendment was the section that prohibited discrimination against girls and women in federally funded education systems, including their athletic programs. A few years later, on the track at Derham Hall High School in the late 1970s, a young teenage Miller began her journey as a widely successful female runner. “A half-mile, mile and two-mile were considered, for females, long-distance events in my high school,” said Miller. “It was believed that if a girl were to exercise too much or over exert herself, she would not be able to get her period and thus could not produce babies.”

Miller explains that, at that time, a woman’s primary value was based on her ability to have children and care for her family. Any other activities she participated in were considered “minor hobbies” and were rarely taken seriously. “My mom was a big enforcer of these false women ideals,” she recalls. “Around age 12 or 13 I wanted to start lifting weights, and my mom said that women aren’t supposed to lift weights because ‘you don’t want to end up looking like a man.'”

However, this poor view didn’t stop Miller; at age 14 Miller turned her basement into her own gym and used bicycle tubes to make resistance bands. Her father even took her to a department store to buy her a weight set. “My dad supported me in ways I didn’t know [or appreciate] at the time,” said Miller. “To this day, I’m thankful he got out of the way and let me go on to more than what society had laid out for me.”

“My friends and I would have medal counts and compete to see who could earn the most,” recalled Miller. “My friends often won the contest since they would compete in the short-distance runs and were allowed to do many of those, while I was only allowed to compete in one of my long-distance events. It was entirely unfair.”

Miller eventually made it into the high school’s Hall of Fame—but not until 2012, the year the Hall was officially established. “Derham asked for my athletic resume of what I had done since high school,” said Miller. “I was one of the first to be put in the Hall of Fame.”

Miller went on to attend the University of Minnesota in 1980, a few years after Title IX had already passed. Soon after Title IX was technically passed, the National Collegiate Athletic Association (NCAA) complained that boys’ sports would suffer if girls’ sports were to be funded equally.

“More money was spent on men’s sports than women’s,” said Miller. “Women athletics received far less financial support from the university, and we had to continue to prove we belonged on the same field as men.”

Miller joined her college track team during the ongoing battle to fully enforce the point of Title IX, racing the indoor 5,000 meters and 10,000 meters. The women could run longer distances, obtain athletic scholarships and were even eventually encouraged to lift weights. “One of my personal favorite changes was that our college finally built a women’s weight room after Title IX,” said Miller. “Before we had to share with the boys. It was the smelliest place on earth, not to mention we weren’t particularly welcomed there.” The incremental growth, and eventual larger change, in women’s sports also began to offset the numbers for men’s sports, causing more equality in numbers and dollars.

Congress passed the Civil Rights Restoration Act of 1988, reacting to the many protests that happened surrounding equal rights for women, outlawing sex discrimination throughout the entire educational institution, regardless of which programs received federal funding. In addition, the OCR renewed its commitment to ending gender discrimination, calling Title IX a top priority and publishing a Title IX Athletic Investigator’s Manual to further strengthen enforcement procedures. This allowed for women athletes, including Kris Miller, to run just as far as male athletes and compete alongside them on the same playing field. “Women became less likely to do drugs, get pregnant or drop out of school [because of this],” said Miller. “Title IX told us that we could do more and achieve anything we wanted. It was liberating.”

RELATED: Some U.S. Women Who Slayed These Olympics

Since graduating from college, Miller went on to win both National and World Duathlon and Triathlon Championships, as well as numerous awards for her accomplishments in athletics. “Before Title IX, girls were considered extremely delicate and if you were good in sports you were assumed to be a lesbian,” said Miller. “While the men ran their big-time marathons we ran our mini 10Ks. Now we see women being the top finishers in marathons and going to the Olympics.”

At age 54, Miller continues to live for the thrill of the starting line. As a 19-year member and grand master of the St. Paul, Minn.-based Run N Fun racing team, Miller still competes in races with other women. “I think it’s fantastic that glorified women runners are an everyday occurrence. But we should keep reminding people why it is so fantastic. You don’t want to forget your roots. I am honored to have been part of the Title IX revolution.”

With every step she takes and every line she crosses, Miller makes a point to never forget the battle that brought her the success she shares today and the experiences that have made her stronger and more determined as an athlete. “We all need to be grateful for the people who paved the way before us and keep pushing limits and never take no for an answer. We each pave the way for someone coming behind us. We are part of a continuum whether we want to be or not.”

4 Reflections After 50 Years of Title IX