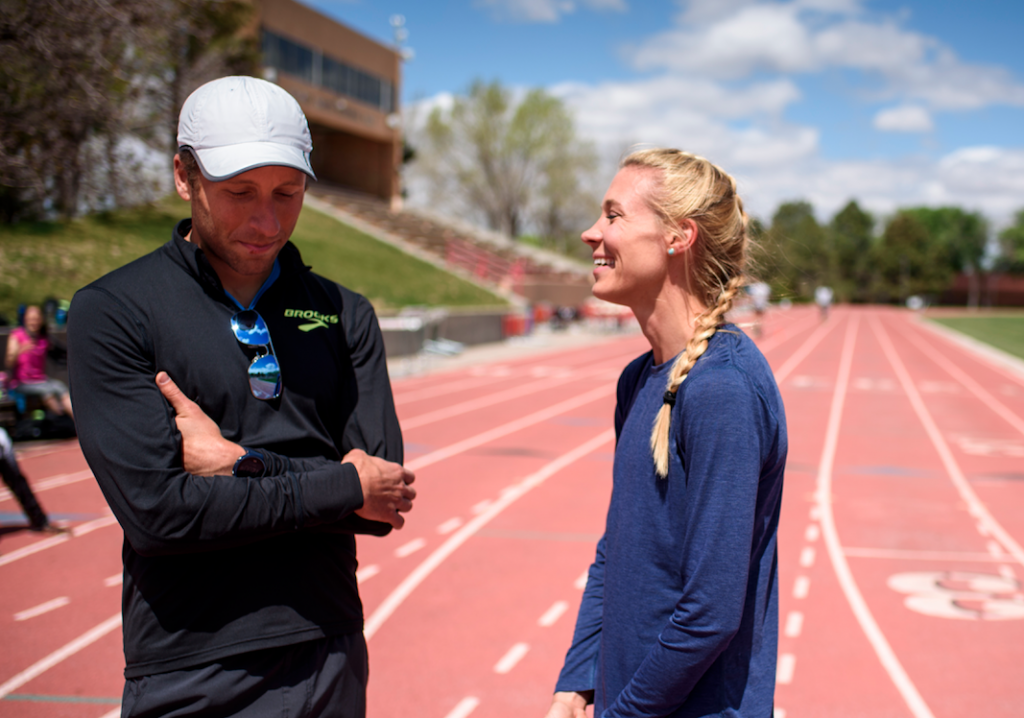 At the Olympic Track & Field Trials, Katie Mackey will toe the line at the 1,500 meters with tunnel vision. Her focus will be zeroed in on advancing to the final, crossing the finish line in the top three during the final and punching a ticket to the Olympic Games in Rio. The last four years of her career have led to this moment; this is her Super Bowl.

For Danny Mackey, this is a sort of his Super Bowl too. If Katie’s success can be attributed to anyone outside of herself, it’s the man who has played double duty as both her husband and her coach. We caught up with Danny to find out what it’s really like to be this elite runner’s support system both at home and on the track. He shares that it hasn’t always been a smooth ride—but the journey has been worth it.

How did you start your coaching relationship?

When we met, I was coaching a number of athletes. She said, “Hey, I want you to coach me.” But I said, “I only want to be a cheerleader.” But we got married and we moved—she left another coach, we had no other choice.

We made it one year, but at the end of that year, I was getting ready to have a talk with Katie and say, “Hey, we need to find you another coach. I just want to be a positive guy.”

But then the Brooks team started [Danny is now the head coach of the large team Brooks Beasts] and it became so much easier. At practice, she has her teammates and I’m the coach. Once or twice a year, stuff from home comes from the track but I’m really sensitive to protecting that. We had one time NBC came and it took them three days to figure out she was my wife. At practice, I don’t do favoritism.

How does it work at home?

At home, it sounds super corny, but if we want to talk about work, we ask each other first. That way our brains don’t have to be in the [running] world all the time. We set up meetings with each other. That’s why she’s texting me right now, to talk about her race.

Most people on the outside think that we talk about track all the time—we don’t. It’s hard but the payoff is, with her, I see how much she puts in. I wish every coach could coach someone like her. It’s almost a disservice to her because as her husband people take my praise as bias, but it’s not. She’s super motivated, she’s super open-minded, she’s physically really gifted and she’s positive. She really loves what she does—she’s the core of the team. And it’s cool sharing that experience with her.

What else is challenging about the coach-husband divide?

There’s a bleeding over from the coach to the athlete that Katie needs to be protected from. I know all about her job—it’s my job to know about her job. But if I’m having coaching issues, I can’t talk to her about it. I just have to internalize it and deal with it.

Also I think it’s easy to be tied in to a spouse’s performance in an unhealthy way. I have to guard myself through validating my ability to coach with her performance. You see it a lot, you know the stereotype of the dad living through his son. I don’t think I’ve ever done that, but I sense myself starting to think about that sometimes. Our relationship with our church is really helpful for having perspective.

What will it be like for you if she makes the team?

You get so tied in with your athletes as a coach, or at least I do, it’s always amazing when they make a team. I would be overjoyed with emotion, but I don’t know if there would be a difference as a husband. When I think of it, I think how proud of her I would be.

Maurica Powell is an “In-the-Trenches” Coach