Along with her former Nike teammate, Kara Goucher is getting a silver medal upgrade…but hers comes 10 years after the fact.

According to The Guardian, Turkish runner Elvan Abeylegesse, who received silver in the 10,000 meters at the 2007 world championships, failed a doping test after being re-tested. This means Goucher just got upgraded from bronze to silver for her epic race 10 years ago. That same athlete will also surrender her two silver medals from the 2008 Beijing Olympics, allowing Shalane Flanagan to rightfully (and finally) receive her own Olympic silver in the 10,000 meters…nine years later.

If you’ve been following the world of professional running recently, this is not the first—and unfortunately not the last—big announcement surrounding drug cheats and medal upgrades. And Goucher has not been silent about her thoughts surrounding the distorted moral compass of a former coach when it comes to finding that winning edge, and we continue to commend her for speaking out.

The Oiselle athlete has not raced since the Olympic Trials Marathon in February 2016, where she finished fourth, but we do expect to see greater things from her in the coming months and years.

Flanagan, who recently withdrew from the Boston Marathon due to injury (and also went on the most envy-worthy vacation to Hawaii!) expressed her gratitude for the upgrade but sadness for those who did not get their moment on the podium in Beijing in a tweet regarding the announcement: Goucher echoed that gratitude and thanked her fans for the kind messages: 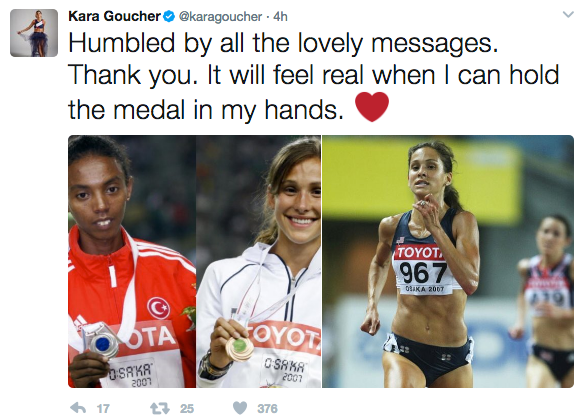