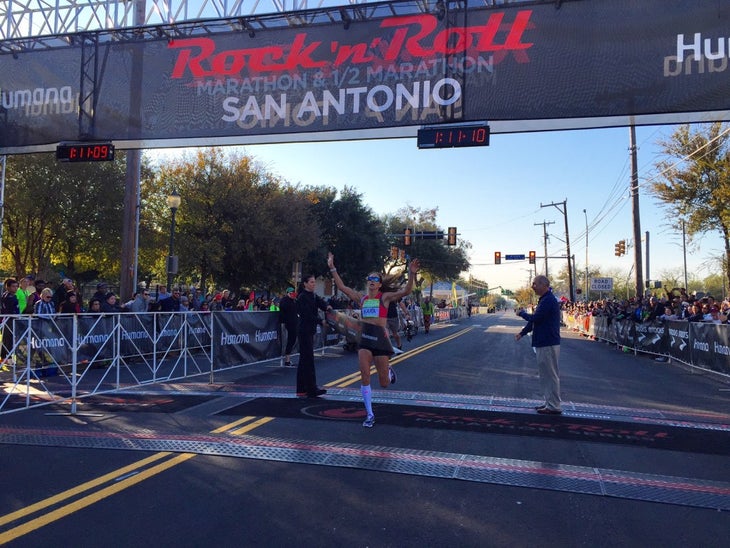 It was no contest today at the Humana Rock ‘n’ Roll San Antonio Half Marathon. Two-time Olympian and comeback story Kara Goucher took a convincing lead from the gun, breaking the tape in one hour, 11 minutes, 10 seconds. Her win comes just three weeks after she won the Big Sur Half Marathon in a nearly identical time (1:11:13).

With a handful of runners staring down the same goal—a spot on the 2016 Olympic marathon team—the race in Texas had potential from some exciting battles between runners. However, Goucher made it obvious that she was in it to totally win (okay crush) it, creating a sizable lead off mile 2 and gradually increasing that over the next 11 miles. Running pretty much alone, save for the handful of male competitors she picked off along the course, Goucher looked solid, relaxed and ready to rumble the entire way.

“I felt right away I was kind of going to be on my own and running with a couple men that would pull me through. But then when they fell off, it was just a great, great exercise for me,” says Goucher, whose effort served as a tempo workout as she enters the meat of marathon trials training.

Related: This Olympian Is Speaking Out For A Cleaner Sport

Recent training partners Shalane Flanagan and Amy Cragg (formerly Hastings) also competed, crossing the line together in 1:12:42 for third and fourth place while leading the chase pack for the majority of the race. The duo spent the last month training at altitude, and Cragg says San Antonio was a nice break from the “monotony” of marathon training and a great fitness check-in ahead of logging a lot of winter miles. They used the race as part one of a longer tempo effort through the city.

“It was perfect. A little bit faster than we were wanting to, but we did well,” says Cragg, who will make a strong case for a spot on the Olympic marathon team next February. She missed the marathon team by one spot in 2012 but still made the trip to London in the 10,000 meters.

Canadian trackster Sasha Gollish made this race a surprising 1-2 finish for Oiselle athletes. The 1,500-meter runner ran a magnificent personal best in 1:12:35. “I’m a track runner, I’m used to it!” laughs Gollish of the turns along the course.

Flagstaff, Ariz., runner Kellyn Taylor rounded out the chase pack behind Goucher, finishing fifth in 1:13:19. The foursome—Flanagan, Cragg, Gollish and Taylor—stayed tight the whole race, making this a fun, fast test of fitness ahead of the Olympic year.

“I’m going to be the best I can be in 10 weeks,” says Goucher, who has spent the better part of the last four years battling with various injuries. “I would have retired a couple years ago if it wasn’t for all my fans who truly believe in me and what I stand for.”

Well, she isn’t retiring—she’s back with a vengeance, and the 2016 Olympic Trials Marathon are going to be a fight to the finish.