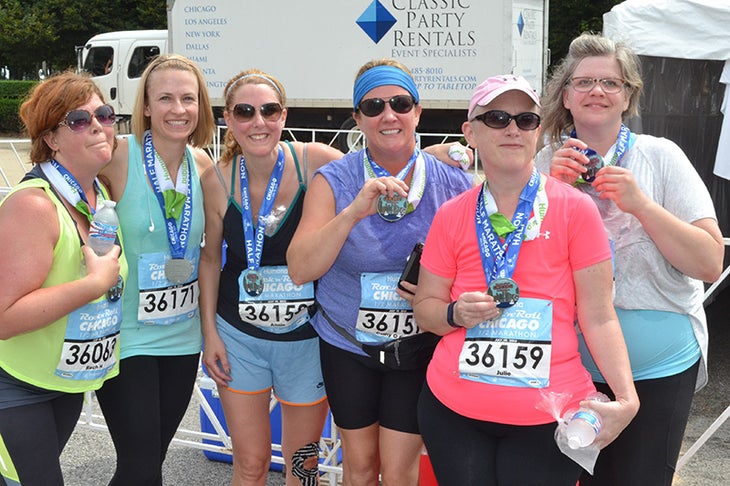 Cancer decided to give Julie Monahan not a single punch to the gut, but a potentially fatal one-two combination. After beating breast cancer in 2008, the Chicago mother of two was diagnosed with cancer again in February.

The disease had spread to her brain, lymph nodes, spine, femur, hips and pelvis.

Julie, 43, soon created a bucket list. Focus on her family. Visit national parks. And walk a half marathon.

On Sunday, Julie, supported by eight friends and family members, all women, lined up for the Humana Rock ‘n’ Roll Chicago Half Marathon.

Her training had not been ideal. Weeks of radiation in March left her exhausted. Longest training walks: six miles, twice. Most training programs recommend that runners and walkers reach 10 to 11 miles before tackling the half.

Recalls Monahan, who works for Chicago public schools as a director in special education, “My oncologist said it would be OK (to do the walk). The doctor told me, ‘Julie, you can do it. Nothing can prevent you. Make sure you take pain medication before and you’ll be fine.”

Two days before the half marathon, Monahan underwent her every-four-weeks round of chemotherapy. Her cancer is Stage 4, which is not curable.

Says Sean, “Julie said to me, ‘Of course I’m going to do the race because the other option is to sit home and wait to die. I’m not going to do that.’ ”

It turned out to be a long day, with the temperature climbing to 88 degrees in the city. Along the way, a volunteer asked if Monahan and her friends wanted to cut off a one-mile loop at about Mile 9. She declined.

“At the end, we were going to be able to say we did the whole 13.1 miles,” says Monahan. “We weren’t going to cut the loop, although part of me wanted to.”

Near the end, Monahan broke into a trot, crossing the finish line in 4 hours, 14 minutes, 28 seconds, running to her husband and daughter, 11-year-old Caitlin.

“When I saw her coming down Columbus Drive and finishing the race, it was one of the most powerful emotions I could ever imagine,” says Sean, “I was incredibly proud. I know that my wife is a fighter. She is stubborn. When she sets her mind to something, whether it’s work or something I’m supposed to do … I better get it done.”

Physically, Monahan said she felt fine, “Until I sat down.”

“Mentally,” she says, “it was awesome. I hit my goal. I did what I wanted to do. And we didn’t get caught by the SAG van. I didn’t want to get driven back to the finish.”

Cancer runs in Julie’s side of the family. Her sister, Ann, died at 32.

“I think of her every day,” says Monahan.

“One of the reasons I did this is for my kids, my family,” says Monahan. “I want to be there for them as long as I possibly can.”

The finish line at #rnrchi was easily the most emotional one I’ve ever been a part of. Julie Monahan, seen in this video, finished her first half marathon on Sunday. She also finished another chemo treatment two days before. I wish I could put the 60 second video here but I can’t so if you have a minute and feel like crying for a bit, head over to the blog (link in bio) or to my FB page to read her inspiring story. Nice work @runrocknroll.