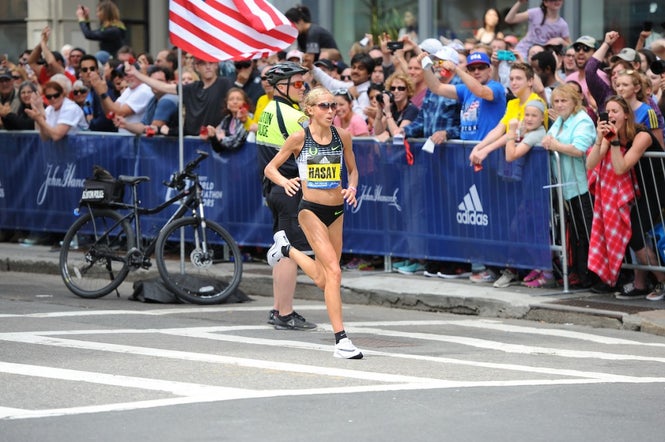 Newly minted marathoner Jordan Hasay, who was first American across the line in her 26.2 debut at the Boston Marathon earlier this year, will use this weekend’s American Association for Cancer Research Rock ‘n’ Roll Philadelphia Half Marathon as a final major tuneup ahead of the Chicago Marathon next month. Together with fellow Nike Oregon Project athlete Galen Rupp, Hasay will headline the American field in the Windy City on Oct. 8, with many fans wondering if she will be the first across the line. 2016 Olympian Jared Ward will also race in Philly this weekend.

Related: It Was The Jordan Hasay Show At The Boston Marathon

Hasay owns an incredible personal best of 1:07:55, which is the third-fastest time ever by an American woman in the half marathon. The deep field also includes Boston Marathon champions Caroline Rotich of Kenya and Buzunesh Deba of Ethiopia. The top woman going in is Meseret Defar, the 2010 event champion, when she made her 13.1-mile debut. Defar’s running career has been phenomenal with two Olympic gold medals over 5,000 meters as well as 12 medals from various world championships.

“It’s great to welcome such a stellar elite field to the 40th edition of the Philadelphia Half Marathon. The race can boast world and American records and the quality on show this Sunday certainly reflects the history of the event,” said Matthew Turnbull, elite athlete coordinator. “It will be intriguing to see how Jordan fairs as she continues her build up to next month’s Chicago Marathon against marathon major victors Rotich and Deba. Plus you have one of the greatest of all time, Defar, a former champion who has run 67:45 on this course and is in great shape after recovering from a long injury lay off.”

Hasay, who had the fastest marathon debut by an American ever in Boston, ran in honor of her late mother in April and continues to say that she’s her inspiration to keep racing hard.