Jordan Hasay is racing the 2019 Boston Marathon after a long recovery from foot fractures. 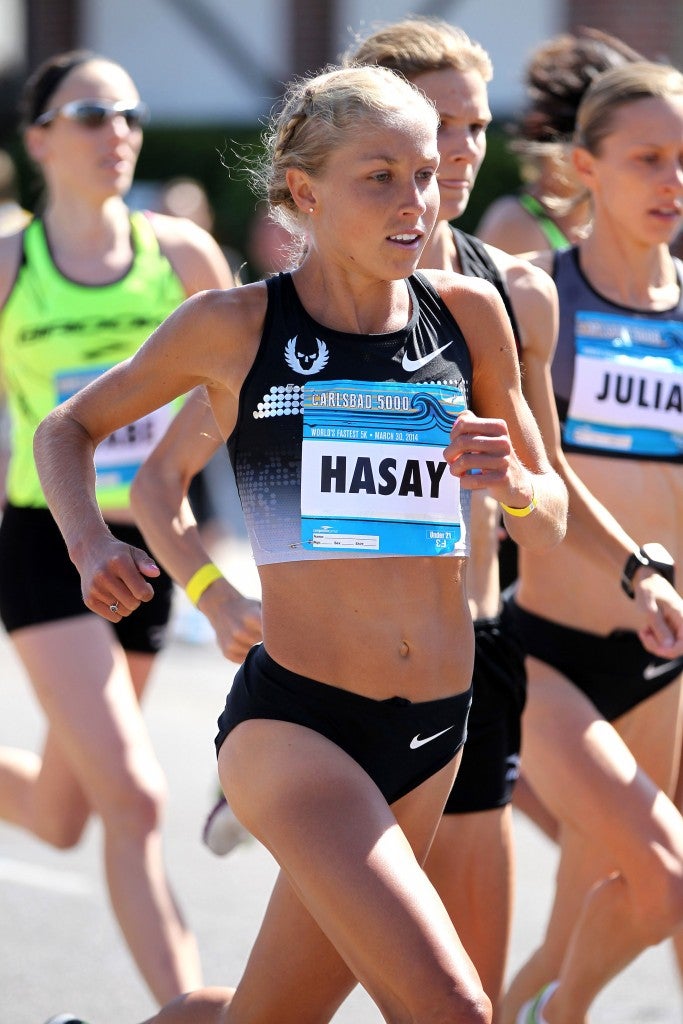 Update: As of Sept. 15 at 11:30 a.m., Jordan Hasay pulled out of the half marathon and will be racing the 5K distance at Rock ‘n’ Roll Philadelphia instead.

Thanks to the movie Rocky, the city of Philadelphia has enjoyed a reputation as the home of the underdog. On Sunday, at the AACR Rock ‘n’ Roll Philadelphia Half Marathon, 24-year-old Jordan Hasay will be playing this role. The Arroyo Grande, Calif., native who collected 18 All-American honors while at the University of Oregon has decided to “move up” in her racing distance and off the track—taking on the 13.1-mile distance for the first time.

“I’m really happy with my training leading up to this,” says Hasay, who is coached by legendary marathoner Alberto Salazar, leader of the Nike Oregon Project. “I’ve been doing over 100 miles a week and some long progression runs to get ready.”

Last year, Jordan Hasay struggled with a nagging plantar fasciitis injury, and she admits that it affected her training and prevented her from qualifying for the U.S. team at the Summer Olympics last month in Rio.

“Last year was frustrating,” Hasay says. “But I’m confident that this race will be a good stepping stone to the marathon.”

Hasay recalls that fellow NOP teammate Galen Rupp has been an inspiration to her. The 30-year-old Rupp won the bronze medal in the Olympic marathon—only his second marathon ever—in Rio.

“I used to see him heading out to train on these long runs and feel sorry for him,” she says. “But now I’m doing them and I realize they aren’t that bad.”

On top of a fresh new distance, the “City of Brotherly Love” is also an unknown venue for Jordan Hasay. She admits she’s never raced in Philadelphia before. “I hear it’s a super-fast course and I’m thrilled to be there this weekend.”

Hasay’s half marathon debut will also be her first Rock ‘n’ Roll series race. “I hear it’s going to be fun and I can’t wait to hear all the bands.” Bonus: Hasay’s favorite musician is Grammy-award-winning singer Adele. (A girl after our own hearts.) “I’m not sure she counts as Rock and Roll, but I’d love to hear some of her songs out there on the course.”

Joining Hasay on the starting line in front of the iconic Art Museum, within sight of the Rocky statue, will be Ethiopian Buze Diriba.  Americans Susanna Sullivan and Neely Spence-Gracey, who finished second in Philadelphia last year and made her marathon debut in Boston in April, will also race.

“I hear that the leaders want to head out at 1:10 pace,” Hasay says. “That sounds about right to me and I hope to be up there with them so we can push each other.” (For reference, the American record for 13.1 miles is around 1:08, so these women are lightning fast.)

This race has always been the fastest “go-to” place for the start of the fall marathon season. The race, which was historically known as the Philadelphia Distance Run, dates back to 1978 and has been the site of five world half marathon records and three American records.