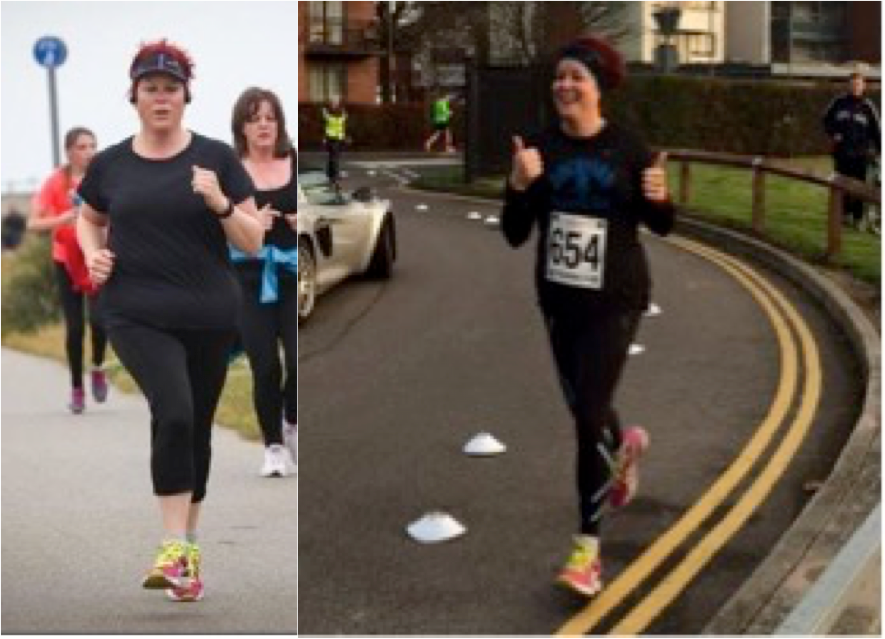 I have been every dress size, yo-yo-ing from a 10 to a 22 over the past decade. Mostly I have stayed at a dress size 18. This is not a story of exceptional weight loss and it’s not over yet. I am a work in progress, but with running, I will get there!

Over the past three years, I have tried to complete the couch to 5K app about four times on my own. I would get to about week 7 and then fall ill with things like chest infections. Or I would just not quite make it on my own. I am a busy working mom who is also completing a doctorate part-time too, so life often took over.

In April 2015, encouraged by a marathon running friend, I found a local Run England Beginner’s course that would last 12 weeks with the Rochford Running Club.

At week 6 of the course, I attended my home park run in Southend and shaved nearly 5 minutes off of my initial 5K time. I have also run 18 5K’s at five different courses and led a run five times. I finally went sub-30 (29:50) at the Christmas run dressed as an Elf—one of my best Christmas presents!

After completing the course, I joined Rochford Running Club to ensure that I maintained and improved the basic level of fitness I worked hard to acquire. I have attended most of our twice weekly sessions, embracing all new aspects of running such as sprint sessions (where I thought I would actually cry), hill repeats, tempo and interval runs. I have a whole new vocabulary!

I also attend Weight Watchers and have lost more than 28 pounds during the past year. I have 14 more pounds to go so I am 2/3 of the way to my goal. Nothing exceptional, but it has felt like running and feeling fitter has made an exceptional difference to me. I have been surprised by what my body can achieve and I never thought I’d be a member of a running club! I have taken part in 5K, 8K and 10K races and have my sights set on my first half marathon at the end of March 2016.

My 7-year-old daughter (who runs beautifully!) has taken up cross country at school and just completed her first junior 5K this weekend after seeing me run, which has been rewarding. I hope that she can see her body as integral to her health and fitness, rather than feeling she has to look a particular way to please others.

I never really thought the running community was for me. I had a bit of an outdated idea of running and running clubs only being for the very speedy, whippet thin “elites.” I have found my running club to be very supportive in their experience, motivation and coaching for my first half marathon. I have been truly impressed that there seems to be a place for every body, quite literally, in the running community.