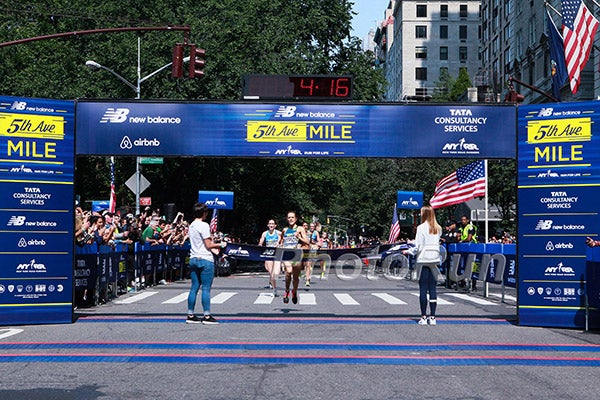 No surprise here really—Jenny Simpson snagged her sixth win and fifth consecutive at the 5th Avenue Mile. Oh, and she matched the 27-year-old course record, winning in 4:16.6. Her record sixth victory comes barely a month after she earned silver at the world championships in London against a stacked field.

In summary, the queen is unstoppable yet again. If you were watching on a screen, Simpson looked like a warrior leading her troops in an epic showdown during the final meters before crossing the line. Her determination and superior stride and force made her just as thrilling to watch on the roads as she is rounding the track and clipping off competitors.

Related: Craziest Things That Happened At The World Championships

“They never let you win. I had to run my butt off to get that today,” Simpson told NBC Sports following her race. Behind her were plenty of other world championship athletes and Olympians, including Brenda Martinez, Emily Infeld, Emma Coburn and Courtney Frerichs.

This race was the final of the track season…and perhaps the best part was seeing some of the athletes’ massive milkshakes on their Instagram stories to celebrate following the race.