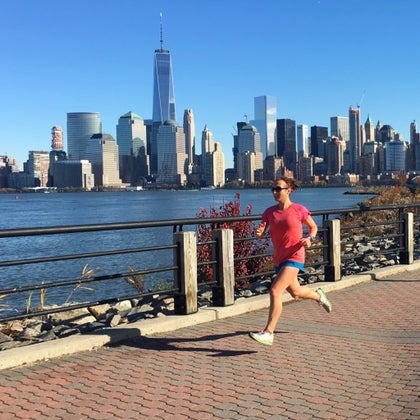 The transgender community has a reason to celebrate with a recent announcement in the sports world. The International Olympic Committee (IOC) announced new guidelines which will allow athletes to compete in the Olympics and other international events without undergoing sex reassignment surgery.

“I think it’s great. I think it’s a long time coming. Surgery isn’t what every transgender person has or can afford. So now allowing transgender people to compete without surgery is bringing it more up-to-date. This creates an open and more fair environment,” expresses Amelia Gapin, a transgender woman, marathon runner and finalist for the 2015 Women’s Running Cover Runner Contest.

The revised policy now allows athletes who transition from female to male to compete without any restrictions.

Those transitioning from male to female must undergo hormone therapy. They also must have a certain testosterone level 12 months prior to competition and maintain the qualifying hormone level throughout competition and pass any potential hormone-level tests too.

“Your genitals don’t affect how you perform. It’s your hormone levels that do,” explains Gapin.

The USATF rules for transgender runners are still based off of the old Olympic guidelines, but there is still hope that this new change will open doors for other events. “Right now if a transgender is transitioning to be a woman but has not had surgery, she’ll have to qualify under the male qualifying time and age,” Galpin explains.

“For me, my testosterone went down to just about zero. That means I had less testosterone than any other transgender woman, which put me at a disadvantage.”

Gapin went from running a 3:08 marathon to a 3:44. “It took some time to mentally cope with that time. I knew ahead of time that that would be my reality. But it took time to accept it. I was putting in the same effort, but I was running slower. I had to work harder to still run slower. I’ve trained harder for races since I’ve transitioned…and still ran slower. So yeah, it was difficult. After a couple years, it just becomes your reality. It’s your normal.”

The testosterone blockers can have other side effects as well. The most common drug in the United States is called Spironolactone. It’s actually a potassium-sparing diuretic, so “it makes you have to pee all the time, which can cause dehydration. It also causes your body to retain potassium,” says Gapin. “So you have to watch your diet—I had to avoid bananas and kale, basically all the really healthy foods that have a lot of potassium in them.”

Surgery or no surgery, there are many issues transgender athletes’ bodies deal with as they transition.

“I think the issue is people think or thought transgender athletes have an advantage without really understanding the full effects of transition. It’s not cut and dry like, ‘Oh you used to have testosterone in your body, and you’re going to be a stronger athlete—forever.'”

For a transgender woman to have “bottom surgery” (as Gapin calls it), it cost about $20,000 to $25,000 and recovery varies per individual. “It can take six weeks before you can maybe walk. Or it could be 12 to 16 weeks before you’re running. But all that time you’re not running, your body gets weaker. So it’s not like you have surgery and then 10 weeks later you’re back to where you were. You’re starting from zero.”

Gapin had to train harder, run longer and push herself more than ever before.

“I discovered that my body needed more recovery time. Besides time, I noticed I had weaker hip muscles, which could lead to injury. So I had to do more strength training, foam rolling…a lot of things I could get away with before I couldn’t now. This just became my normal and I finally accepted it.”

“It’s my hope that USATF and other governing bodies will update their policies as well,” expresses Gapin. “This is a big step forward and it brings the Olympic rules up to date to where they should be and aligns what the NCAA has already done. It creates an environment where transgender people can actually take part.”