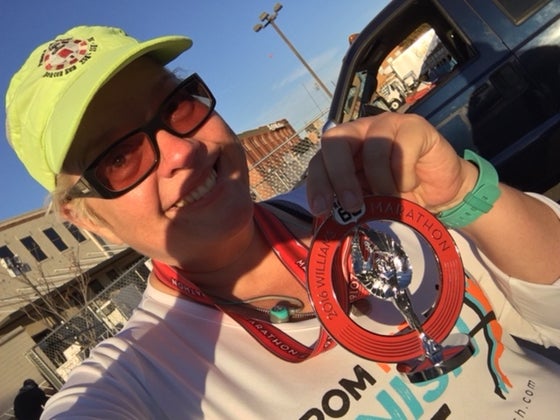 *This appeared in part on the Hellcat Facebook Page

Relax. Flexible. Curious. This was my mantra in the weeks leading up to my second full marathon at the Route 66 Marathon in Tulsa, Okla. My training had not been on point as it probably could have been. I was heavier than I was for my first marathon. And, I had been hearing how hilly this course was. But I wasn’t going to let any of that deter me. I wanted to be able to say I run marathons.

I was really considering backing out because of the weight gain. But after much exploration, I decided to stay the course and my mantra and focus would be this: Be Relaxed, Be Flexible, Be Curious. When things don’t tend to go as I have planned, I tend to panic. I value knowns and dislike unknowns. I feel like a failure if things don’t go according to my plan. I had to relax. I had to be flexible to whatever might happen on that course. When and if things got off course or not according to plan, I needed to relax, be flexible, and be curious. This approach would save me.

There were many peaks and valleys, but mostly valleys. I’ve never wanted to quit a race before—I wanted to quit not just once, but at least a dozen times. In my moments of loneliness, despair, and discouragement, I found moments of love. When you are surrounded by that much love, and love yourself, you can do anything.

I discovered moments where I could relax and remain flexible and curious to notice and accept the love and support around me as I willed my way to the end—an ending that, according to the rules, I would not receive an official finish time or a medal, I would be in the Did Not Finish category—a realization that hit me at Mile 18. Should I finish? Can I finish? Will I finish?

Somewhere between chipper angels, police escorts, the center of the universe, and the compassionate hearts of others, I found my way and my answers. I learned why I was there and what I came for. I learned to push through adversity. I learned to discard embarrassment and regret in exchange for goodness and what awaits each and everyone one of us if we just drive fearlessly into that moment and turn that corner.