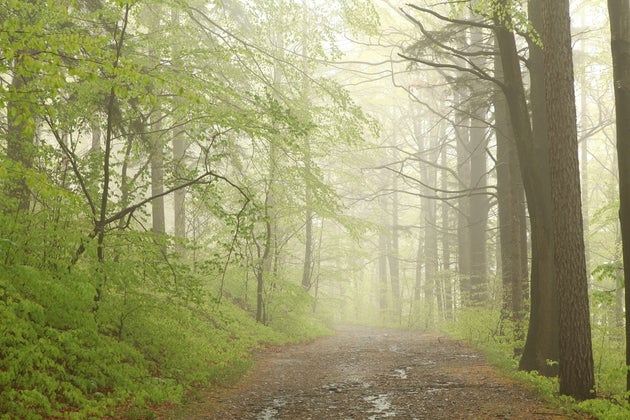 I may be a bit dusty in places but there is a tranquility about me that draws walkers and bikers to enjoy. I am a secluded trail, in a small, out-of-the-way town so those walkers and bikers are few. I didn’t think much of it when a couple porta-potties showed up one day, but I sat up and took notice the next morning when a couple of campers resembling a traveling circus arrived. Within minutes, an entire event was staged; complete with tables and awnings. There was a red trailer parked right next to me with a banner that read Mainly Marathons.

Before I knew what was happening, the nearby parking lot filled up with cars, and out of them poured a swarm of people. They huddled near the awnings and suddenly, they were on me, some walking, and some running. This was a new experience for me, such a large group of people laughing and talking and having a good time. This wasn’t just any group of runners and walkers; these were participants in a Mainly Marathons event. They have graced me with their presence so I intend to listen in to their conversations to find out more about them.

The group, some young, some old, did not go far before they turned around and went back to where they started from. Some of them stopped for food and drink, but they all stopped and put something on their wrist before starting out again. One runner asked the other, “Did you get a rubber band?” The response was, “Yes. I was told to take one but I don’t know what it’s for.” The runner responded, “That’s how you track how many times you have been out and back. You don’t want to forget to take one every time you go to the aid station or you will lose track and perhaps run extra miles.”

Related: Tips To Start Trail Running For The Older Athlete

Every once in a while I would smell something really good. I heard several participants tell the others on the course that Norm had just made fresh hot paninis. One runner in particular stated, “I love everything that Norm cooks.” Now I want to meet Norm!

As the miles crept by, the group of runners and walkers grew smaller. I had heard some say that they were finishing here and moving on to tomorrow’s site. You’re kidding, right? I wanted to say, “There’s another event tomorrow, somewhere else?” I think I heard a runner say this is day one of seven.

I watched as the runners finished. The fast ones at the beginning of the crowd were doing what is called the 5Ks. Then came the mid-pack. They were doing what some called the half marathon. What shocked me was the distance of the half marathon: 13.1 miles. I don’t think anyone has ever walked or ran that distance on me before. And then, if that wasn’t shocking enough, some were doing a full marathon. That is 26.2 miles! And they are going to do that distance again tomorrow, somewhere else? There are some that are even doing Mainly Marathons’ new distance, the 50K. Wow! Now that’s endurance!

I was proud as could watch each finisher receive a medal for their effort. I don’t mean just any medal either. This was bling worth hanging on their wall. I also noticed that the first, second and third place finishers did not get extra recognition. To think I helped them achieve their goal.

It’s getting late. The parking lot is emptying as participants finish, pack up and head out of town. Even one of the campers has left with some of the tables. There are just a few participants still treading on me. I keep an eye on them but I am not alone. Crew members are still on site and will remain here until everyone has finished. The remaining participants are hot, tired and some are even feeling miserable, but I see them smile when another runner cheers them on or gives them a drink. Today I have watched total strangers become cheerleaders, supporters and even friends, all while using me to achieve their goals.

It’s down to one participant. He is being cheered on by the crew and a few runners that remained to see him in. He crosses the finish line, last but not alone, tired, but thrilled he accomplished his goal. What’s this I see—they are giving him an extra award. Because he came in last, he is being handed an antique train caboose that reads, “The Best is Last”.

Related: I Came In Second To Last In A Major Marathon

Dark has prevailed. The awnings and tables have been packed. The campers have left to travel to the next course. The porta-potties still stand, empty, waiting to be picked up but I am nice and clean because the crew checked me for trash. I can’t help but think of the accomplishments achieved today. For some of the participants, this was their first race while others were achieving goals such as “Sun” or “Fifty State Finisher”. From the inexperienced to the masters, everyone had a successful day.

Before they left, I peeked at a business card someone had dropped. It said, “For more information on Mainly Marathons, go to www.mainlymarathons.com”

Cathy and her husband, Norm, travel throughout the United States in their Brave Winnebago working for Mainly Marathons. When home in Westfield, Wis., their RV is parked on a gravel pad while they finish construction on their new home. Cathy documents their many adventures on her website at www.positiveinfluences.net.