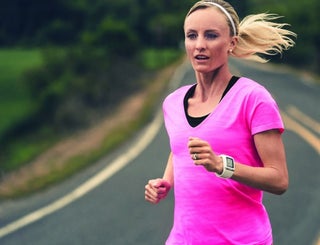 Most of the time, I run by myself. While I’d love to run with a running group, or better yet a BRF [best running friend], as a working mother of three, it’s hard to make that happen. As a runner, even if you are not a mother runner like I am, you’re most likely a busy type-A person. I think many endurance athletes are. The run is our form of reprieve from the go-go-go life. And trying to find a BRF who lives close to you, runs your pace and distance, and can coordinate schedules with you–well, it may be harder than finding a partner in life.

But for the most part, I enjoy a run on my own, as it’s my version of meditation. When I do need a run with a BRF and a little extra motivation, I play little running games with myself—and turn to my imaginary BRF, Shalane Flanagan.

For example, maybe I’m doing my version of a fartlek workout: not so organized and official, just from one stoplight to the next. During my little speed interval, I’ll pretend I’m running with Shalane as fast as I can, until the next stoplight when I get to take a break before meeting her again. We fly from one light to the next, leaping in stride, sweat spraying off my ponytail. Or maybe I am just cranking out miles on a long run, and I have run out of thoughts with a few miles left to go. Shalane will join me to get me through. We won’t be sprinting, but running at a comfortable pace, discussing our weeks with each other. Suddenly I’ll see that the last few miles of my 12-mile run are over, and we haven’t finished telling each other our weekly recaps. The rest of the story will have to wait until our next run.

I need Shalane most when I’m practicing hill repeats. We’re at the Boston Marathon on Heartbreak Hill. Sometimes I’m waiting for her at the top, sometimes she is waiting for me, but often we are in stride together, always encouraging each other up the hill. Maybe we make great running partners because we’re not only both cancers, but were also both born on July 8—although she was born 8 years after me. And she was probably running in the womb, while I didn’t start until I turned 38.

I guess I’ve always had a wild imagination. It started when I was a little girl, creating a little fantasy world with a fantasy family in my head. And like most of you type-A runners out there, I’ve never been lacking in drive, determination and visualizing my dreams into a reality. One of my dreams came when I was around 18. I visited my aunt and cousins in Los Angeles regularly, and I’d walk their neighborhood and the run path close to their home. I became determined to one day move to LA. It took about 15 years to make that dream a reality, and now that run path that I walked on is the one that I run regularly, the same run path that Shalane and I run together.

Related: What Happened At The Boston Marathon This Year?

But despite all the imaginary runs with one of America’s top marathoners, there’s another dream that will more than likely never actualize. After all, I don’t think I could run a 5-minute mile for even 30 seconds, and I don’t think that her legs can physically slow down to a 9-minute mile, even if she tried. The chances that I’ll qualify for Boston one day are maybe minimally higher, but there is no harm in gathering motivation from an imaginary encounter with Shalane. At the minimum, it gives me a push on my speed intervals, it makes my long runs go by much faster, and it brings back the adventures of my childhood. On those days when I just can’t seem to make it up and over my last hill repeat, I remember that Shalane is waiting at the top of Heartbreak Hill for me, so we can finish the final miles of the Boston Marathon together. I wouldn’t want her to not place in the top because of me.

Paria Hassouri is a runner, a mother and a pediatrician who turns to running to maintain her sanity. She writes for her own blog, Mom On The Runsanity.