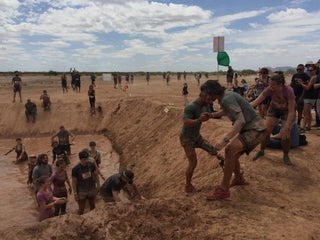 I’m not the first person you’d expect to do a Tough Mudder. Frankly, I’m in my forties and am not the biggest fan of dirt or the potential bruises or strains that seem as if they’d come from that kind of event. But I decided to check it out and see for myself.

This motto to live by was offered at the start line: Try something new every week. Tough Mudder is about getting out of your comfort zone, living life to the fullest and connecting with others in that pursuit. For me, and a lot of other newbies this weekend, those 10-plus miles and 20-plus obstacles in the desert outside Phoenix would be completely new. Though I knew the running wouldn’t be a problem, the different challenges along the way would test everything from my arm strength and mental grit to my ability to take and offer assistance from and to my teammates.

After hours of scrambling through mud pits, climbing over walls and getting dunked in vats of water (one that was also loaded with ice—thank you, “Arctic Enema“), I got to the point when I was comfortable with skipping a few obstacles. That is what’s great about Tough Mudder. It’s all about pushing yourself and supporting your team, and there was no shame in a bypass. I helped a few teammates get up and over a wall before I walked around it. Scrapes and bruises are part of the game, but I’d reached my limit.

Whenever I was on the sidelines, I focused on cheering on my teammates. I ended up with an amazing view of Noah Galloway doing a backflip into the water at “King of the Swingers”—injuries that took a leg and an arm from him in Iraq didn’t stop him from crushing the course and inspiring everyone along the way. It was an honor to be on his team.

By the time we reached the finish, our team of 10 was more than ready for a beer—and food. Not only had we conquered the course, but we’d unexpectedly had to deal with cold temperatures and even rain and hail. Beforehand we had feared the Arizona heat. Wrong! But the most amazing gift from mother nature came when I arrived home on Sunday.

There are three reason why I’d seriously consider doing another Tough Mudder:

1. I didn’t end up with nearly as many bruises and scrapes as I’d expected. The event (not a race!) provided excellent incentive to include strength training in my weekly regimen, and just a little of that goes a long way when it comes to an event like this. I should also give credit to the new Merrell All Out Crush shoes, which were certainly responsible for surer footing—since the brand partnered with Tough Mudder, it came out with a shoe designed to perform under muddy, wet and crazy pressure.

2. Teamwork brings people together in a way that doesn’t happen at running races. Sure, I love sharing the miles with others at races that I’m not doing for time goals, but when you need to rely on someone else’s knee to give you a step up or their hand to pull you up, you get out of that zone of independence.

3. This year Tough Mudder has introduced half events, and let’s face it: That’s perfect for me.