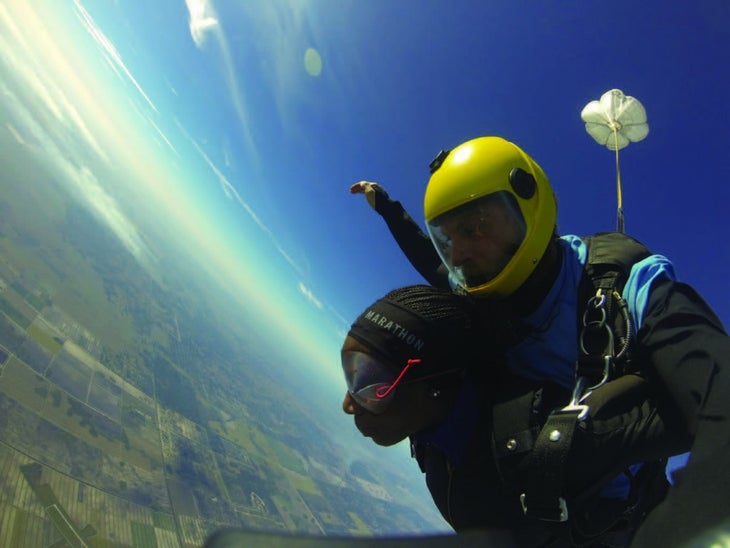 I jumped out of a plane at 15,000 feet just minutes before I ran an ultramarathon!

As the plane ascended  to 15,000 feet elevation, I scanned the cabin to see fellow runners anxiously waiting for the drop and thought, What did I get myself into? I had never performed a skydive before. In fact, the idea of jumping from a plane terrified me. But when I heard about the SkyDive Ultra in Clewiston, Fla., the allure of attaching the feat to a race made the idea exciting.

With my nerves raging, the plane entered the drop zone. The door immediately opened and runners began jumping. Before I could process the task ahead, time fast-forwarded and I was standing at the door attached to my tandem instructor listening to his countdown: One, two, three—JUMP!

Adrenaline rushed through my body as the initial free-fall sent us plummeting toward the ground at 120 miles per hour. When my instructor pulled the first section of the parachute, I started to feel like I was floating on air. At this point, I was able to take in the view and soak in the adventure.

When we reached 5,000 feet elevation, we calmly crested to the ground where I rushed off to remove my skydiving gear and set out on the second leg of the race: a 50K run.

Related: My First Race Was An Ultra

I was on a natural high when I started to run—I couldn’t believe I had just jumped out of a plane! The first 6 miles ﬂ ew by (no pun intended!) and I still felt relatively good at mile 13. Since the event included various distance races with staggered start times, there was a constant stream of skydivers jumping and it was really cool to watch them all ﬂ oat down to the ground as I continued running.

By mile 18, I started to fade a bit due to the heat, and my leg cramped up at mile 21. I took salt tabs and forged ahead until I hit mile 26, where I got a second wind: I knew I only had 5 miles left.

Filled with emotion, I couldn’t wait to cross the finish line and convince my friends to run the race in the future. I’ll never look at the sky and clouds the same, knowing that I once jumped through them to begin one of my most epic running adventures.

Completing this race helped me discover that I’m braver than I ever imagined. Shoot for the stars, because even if you miss, you’ll still land in the clouds—and that’s a pretty awesome place, in my opinion!