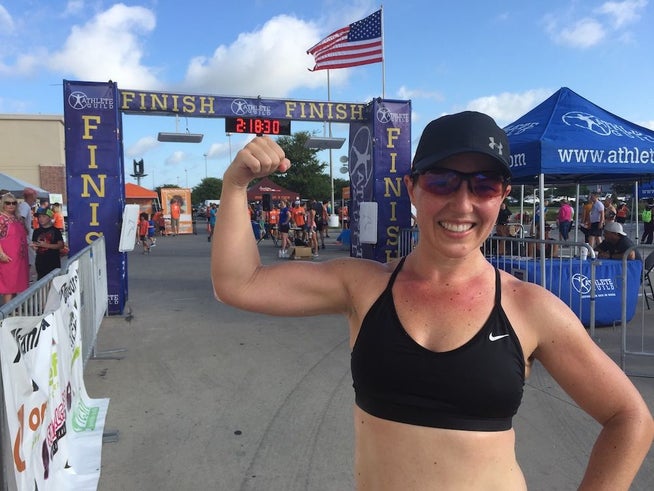 “I Can’t Run” Was Just Another Lie I Told Myself

After weight gain in my 20s and 30s, a miscarriage, a high-risk pregnancy and an emergency C-section with my daughter, I found myself topping the scale at 210 pounds and unknowingly entering the hardest years of my life. Within a few short years I experienced fertility problems, a diagnosis of Stage IV Endometriosis, three major surgeries (including a total hysterectomy at the age of 32), an adoption that brought my son into my family, a faith transition, and I moved my family across the country.

Related: I Became An Ultrarunner Less Than A Year After Having My Daughter

In 2016, I was in new surroundings with what felt like a fresh start. I found myself at a fair signing up for three sessions of personal training at a local studio. It was unexpected. I hadn’t thought about trying to get healthier or losing weight prior to that moment. With failed bootcamps, diets and health problems in my history, I didn’t have any reason to be hopeful. I underestimated the impact that those years of persisting through hard emotional and physical challenges had on me. My trainer said she thought for sure she was never going to see me past those first three sessions, but I kept showing up. I lost 80 pounds in her studio in one year’s time. Everything else in my life had changed–how hard could it be to change what I did and ate? I learned how to change through those hard years and knew it was possible; surviving was doable.

Once I had reached my goals, I had a What’s next? moment. I had strength and momentum, but I needed something to put it towards. Running kept gnawing at me. I’d always told myself I couldn’t run, but I wondered if that was just another lie–a lie I had believed and now needed to crush. Just like I did with beliefs like I can’t lose weight, I have too many health problems and I’m not worth the time and investment, I set out to prove that I can’t run was also a lie. 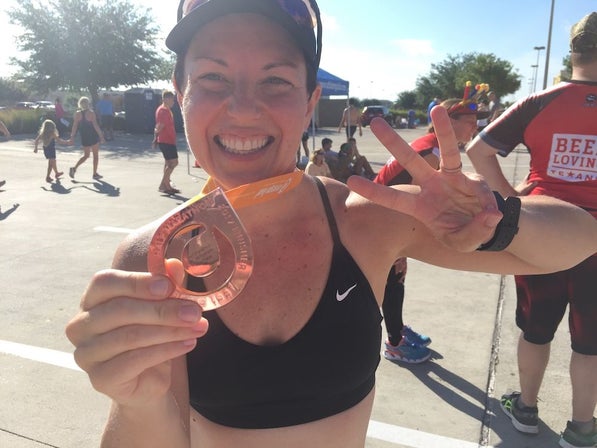 At first I was just running and walking around the tiny track at an elementary school while my kids played. By the end of that training, I had taken to our neighborhood trails and really started to enjoy running. I loved the solitude. My goal was to complete a 5K race without stopping.

I didn’t know what to expect from that first race. I’d never run next to one person, let alone hundreds in a racing environment. But I did it. I finished my first 5K in March without stopping. Since that first race, I’ve run two other 5Ks and a 10K. This last weekend, I completed my first half marathon and placed third in my division. I’m happy to report that I can’t run was, in fact, just another lie I had believed about myself.

Running has given me a space to see my strength and the results of everything I have worked to be and do–and everything I have always been. It’s the place where I live with myself. It’s just me, my feet and the trail. It’s easy to second-guess my strength, bravery and endurance throughout life’s challenges. But when I’m running, I get to feel my strength (both mentally and physically) and know it will be there when I need it.

What are the things you believe about yourself? How are you going to figure out if those beliefs are lies or not?

Real Runners: She Survived Combat Wounds And Ran A Marathon

How Running Contributed To My Addiction Recovery