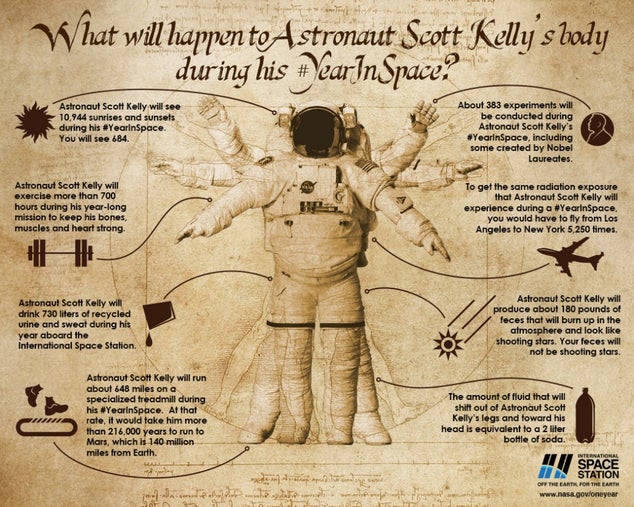 Last Tuesday marked the halfway point of Astronaut Scott Kelly’s year in space on board the International Space Station. If you think he’s hanging out playing Words with Friends and eating Astronaut Ice Cream (love that stuff), think again! Part of Kelly’s daily routine, besides conducting experiments, is hitting the treadmill, albeit one especially designed to work in space. According to NASA, he’s expected to run about 648 miles.

On Twitter, Kelly tweeted, “On treadmill with bungee cords holding me down.” He also said that he’s more concerned about running than walking when he returns to Earth; it must be nice to run with no-gravity impact!

How’s he going to hydrate you ask? By drinking 730 liters of recycled urine and sweat. We’ll never complain about watered down or luke warm aid station beverages again!

Despite the recycled bodily fluid, we definitely have scenery envy when it comes to what he gets to see on those ‘mill runs—his Twitter account is insanely beautiful!

The Heat Is On For Races to Become Greener. Can They Do It?

Distance Runners, This 5-Move Dumbbell Workout is For You

All Runners Should Walk More—Here’s Why, and How to Include It In Your Training