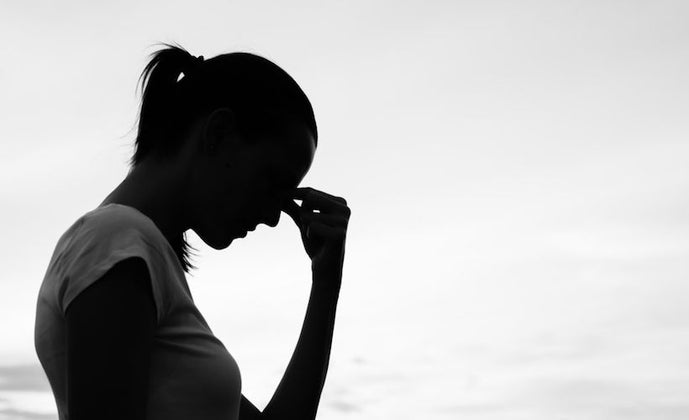 “I’d like to get more active. But I am going through some major depression issues, which keeps me pretty immobile. Am I alone here? Anyone else experiencing this? My mom added me to this group. I thought about just leaving but I’m sure she wants you all to motivate me… I just feel totally out of place & unworthy with you ladies.”—Taja Meadows

I saw this post on the #REALwomenmove Facebook group recently and my heart went out to Meadows. I don’t suffer from depression, so I couldn’t answer her specific questions, but I immediately wanted to help her. Turns out I didn’t need to jump to her rescue because within an hour almost 50 women had replied; some with similar issues offering actual tips and others simply for support.

I started reading more stories, and I realized that, while many women suffer from anxiety and depression, very few talk publicly about it. Despite the recent uptick in public discussions about mental health, there remains a stigma about depression. Many women feel shame because they can’t simply pick themselves up by the bootstraps and force themselves to feel better. Since we can’t physically see depression, it’s easy to hide it, which can make it worse because one of the most important steps forward is to talk about it.

According to mental health therapist Andrea Ferrara, LPC, “Many people decide to hide their depression or anxiety because they identify it as a weakness as opposed to just another emotion that we go through in the human experience. It’s kind of like the #MeToo movement: People don’t start talking about it until it becomes a more serious issue for them and their family.”

Jen Szabo is a self-proclaimed “high functioning woman with anxiety and depression” who has a lot to say about the stigma surrounding depression. She believes that it’s important to not only confront but to actually embrace anxiety and depression, so she gave hers a name: Susie. “I know I will feel better if I tell someone,” she says. “Giving my depression a name makes it easier. Then I can call my friend and say, ‘I’m going out for a bike ride because Susie is here today.’” When you allow yourself to acknowledge your depression or anxiety, you can learn to sit with it instead of trying to immediately fix it, the latter of which rarely has a positive long-term effect. As Szabo explains, “When Susie shows up, I can either try to push her back out the door or I can invite her in and have a cup of tea with her. I make friends with her, which allows me to better deal with her openly.”

Some people don’t have a close friend or family member they are comfortable sharing with, so they turn to more anonymous support groups for relief from their isolation. Meadows is a perfect example. She explained that, six weeks after her second child was born, she started experiencing very strong postpartum depression. “I was mad at my daughter for existing. I was mad that she was taking time away from me and my son. I was mad that my son was jealous,” she explains. So Meadows went to her doctor and began taking medication, which helped tremendously with the severe emotions. Even so, she still didn’t have the motivation to get out of the house and move.

I asked Meadows why she finally posted on the #REALwomenmove Challenge group. “I felt better when I got out and walked around, but I only got out when I was actually forced out of the house. I’m introverted and don’t make friends well. I struggle with self-worth, not feeling good enough for a number of reasons. My mom signed me up for the group because she found that exercise helps her deal with her manic depression. Some of the posts in the group made me feel out of place. They’re just so positive and happy. But at the same time, I wished I could feel that way.”

The onslaught of well wishes Meadows received after her original post had the opposite effect—at first. Meadows felt that, while most people were really supportive, a few seemed to play down her depression. She quit the group and returned to her favorite outlet for her depression: blogging. It’s relatively anonymous (unless you’re a famous blogger); you can journal your feelings on your own time so that the people you care about most can understand.

Meadows isn’t the only one who turns to blogging. Sandra Laflamme has been blogging for years through Fit Approach, a network of fitness-focused bloggers. “Blogging has helped me with my depression because it is a place that I can write and share with others what is going on and it has also allowed me to connect with other individuals who are going through a similar experience. These connections are very helpful in making me feel like I am not alone, as depression can be very isolating.”

When anxiety and depression hit, it can be nearly impossible to do some of the things that have been proven to help, like talking about your depression and exercising. “Depression and anxiety can both be absolutely debilitating,” Ferrara says. “They have strong, insidious, seductive voices that tell you that you are not capable of things. ‘You’re worthless. You’re hopeless. You’re helpless. You cannot achieve any goals. Nobody likes you. Nobody loves you.’ These are the messages that depression and anxiety say, but they are not true. The key is to hit depression and anxiety head-on as if it is an oncoming train and you are Superman. Hit it with facts: ‘You ARE loved. You ARE complete. You ARE a real woman. You ARE a real woman who moves.’ Even if you can only move for five minutes. Every small measurable goal is movement.”

Rose Wetzel was a frequent competitor on the hit TV show American Ninja Warrior until she got pregnant a year and a half ago. Wetzel is normally a very positive person, but after a difficult birth followed by a move away from her friends with an infant and a husband with a treatable yet incurable form of cancer threatening to return, Wetzel started experiencing mood shifts and other symptoms of depression for the first time in her life. Then, an ankle injury popped up that prevented her daily run-induced endorphin boost and got in the way of training for her job as a pro obstacle course racer (a job her little family relied on to pay bills while her husband job-searched in their new city). “I read this list [of depression symptoms] on an especially difficult day in early February, and after realizing I qualified for the first five, I was like, ‘Well, I’m not going to wait around for the last three to develop.’ So I took some self-care steps to feel better.” (Note: Full clinical definitions of depression and anxiety are on the Diagnostic and Statistical Manual of Mental Disorders website.) Wetzel focused on three things during this time: therapy for her mind, massage and acupuncture for her body and volunteering in the community, so she could focus on others and gain some life perspective.

The only thing we know for sure is that everyone who experiences depression is different. What works for one person may not work for another; but at a minimum, learning what real women have done to help themselves can provide new ideas and coping mechanisms.

Here is some advice from real women who suffer from anxiety and depression.

Before I was a runner, I was a cutter for nearly a decade, and then I finally figured out a way to begin treating my depression. Once my depression was treatable, I was able to make better choices about how to deal with the darkness that sometimes still overtook my mind. Rather than reaching for a razor, I would reach for running shoes.

Running did not cure my depression. I think that the narrative that working out alone is enough to pull someone out of a clinically depressive state can be dangerous and can add to the stigma that surrounds mental health and medications. So no, running didn’t pull me out of my depression. What it did was give me a healthier outlet when the pain and darkness began to recede and I was able to make better decisions for myself. Today I love this new app called Calm Harm. When you feel the urge to self-harm, you log into the app and do an activity that helps take your mind off the urge. For someone well into recovery whose urges pass fairly quickly, this has been a great tool.

Break exercise into small, manageable pieces. Tell yourself you will walk to the end of the corner and back. Nothing more, nothing less. Or set a small time increment, like 10 minutes, to just walk around the house. To complement my prescription regimen, the physician prescribed exercise, too. She recommended 10 minutes to start. “Just do 10 minutes. You can do anything for 10 minutes.” It took me several attempts to get in a 10-minute walk. But eventually I did. I also found a support group of mothers who became my lifeline, even though it was not a group specific to depression. Moms Offering Moms Support (MOMS Club) helped me get out of the house, introduced me to other mothers and offered a support network. When my depression was darkest, I could count on this group of moms to call and check on me, offer to watch my son or just keep me company.

My favorite trick was to “fool my brain.” I scheduled my runs for first thing in the morning and would lay out all of my clothes and shoes right by the bed. Then, when my alarm went off, I just slipped into everything and was out the door before my brain woke up enough to come up with reasons not to run. Another trick I used was to tell myself I was only committed to run for five minutes. Then, once five minutes had passed, it seemed silly to stop because I’d already gotten this far, so I would keep going. Lastly, something I heard just the other day in Weight Watchers that sounded good was to find a really good book on tape or podcast and only allow yourself to listen to it when you’re running.

Here’s what we know: Depression sucks. And it sucks even worse when you can’t talk openly about it. Take a cue from Szabo and name it; see if that makes it easier to talk about. Identify someone or find a group that you can lean on. Ask them to help you get out the door during the days when you can’t do it on your own. Set small goals: five minutes, 10 minutes. Use every trick in the book. Exercise helps, but it’s only part of the equation. Find a therapist who will oversee your journey and help you at each stage. And above all else, remember this: You are not alone.

Author’s Note: After interviewing Meadows for this article, I suggested she rejoin the #REALwomenmove Challenge group, which she quit on a whim. She did; and her next post was again met with overwhelming love and support. “Ok. It’s not much. And it’s not a triathlon or anything… But today, I got OUT of the house with my kids,” Meadows wrote. “Considering how bad my depression has been for months now, this is huge.”