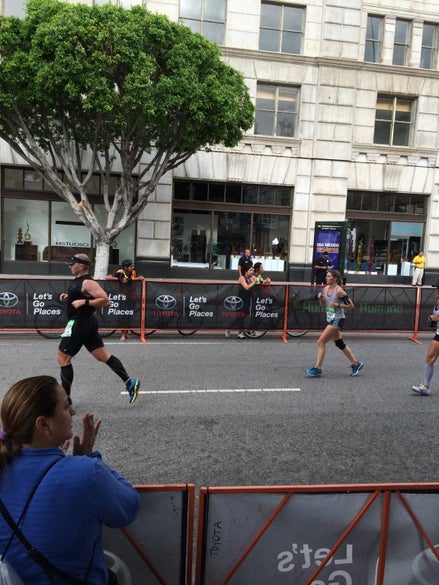 Aside from the awesome feat of completing a marathon before she was 30, Taryn Bone has another very honorable accomplishment: she’s a veteran, having served in the army reserves. “Running is my biggest stress relief. It’s my me-time where I can think over any issues, or just be one with the beach,” says Bone. “It has made me more determined and helped me tremendously to deal with some big family issues that have arisen recently. I had just completed my marathon, marking my turn to age 30 when some major stuff happened with my mom and it was because of my physical and mental training for a marathon over the past year that I was able to really step up to the plate to know how to best take care of her.” Women’s Running caught up with Bone to hear how her life as a runner and member of the military worked together, and how running continues to change her life today, where she is currently an architect.

Women’s Running: How did running help you through your time in the army and positively impact your time there?

Taryn Bone: I didn’t really get into it until my second and last deployment in Kuwait in 2008–2009.  There was a 5K on the base for every holiday, and I ran them all (It was a free race, and you get a T-shirt!)  I found my competitiveness in the last quarter mile or so, always conserving my energy to sprint that last bit and pass a lot of people who were better at keeping pace throughout. I started chasing my PR (though I wouldn’t even know that term for a few more years). I was never athletic but now here I was getting a little bit faster every race, never winning overall or even coming close, but beating my own records and it was amazing. All the running was just part of it; we had great gyms on the base in Kuwait and I spent a lot of my time in them. Working out took my mind off of being away from my husband and friends (who were all finishing up their last year of undergrad without me). It gave me the zen that I needed to get through a year away from home.

WR: How did you come up with your goal of running a marathon before you were 30?

TB: I visited my sister who was living in Hawaii in 2014 before I turned 29.  She has always struggled with her weight and had recently completed her first half marathon, where she ran the whole time. I was amazed and went on a 4.5-mile run with her on the army base where she and her Navy husband lived. I couldn’t believe I ran that far; I hadn’t done that since I was stationed in Kuwait.  She made me realize that I live in Los Angeles with great weather, so I should be running outside, not on a treadmill.  I had always thought I wanted to do a marathon at some point in my life, so I made Rock ‘n’ Roll San Diego, right before my 30th birthday, my goal. I got back from a 10-day trip in Hawaii and planned out a 5K, 10K, and half marathon over the next year leading up to me finishing that marathon before I turned 30.

WR: What does Veteran’s Day mean to you now that you are a veteran?

TB: It’s interesting because I don’t really seem to most people like a veteran, and the people I interact with daily—coworkers, clients, neighbors—they don’t know I served or just don’t think about it.  I wonder each year who, if anyone outside of my family and friends who knew me back then, will say things like, “Thanks for serving!” on Veteran’s Day. But I also don’t want a big deal made about it from those who do know. The day always reminds me of what I have done in the past, as far away from my mind as it is on the other 364 days of the year. It makes me think of my army friends who I rarely talk to, but still hold dear to my heart. And it makes me proud to think of how far I have come and how much I have done in life.

WR: How has running helped you transition back into life as a civilian?

TB: It’s something I started doing in the army, but something that I will never stop doing. Anyone can be a runner!

Why One Veteran Doesn’t Celebrate Veteran’s Day For Herself

Through Running, A Veteran Gives Back To Wounded Warriors

5 Morning Stretches That You Can Do From Bed