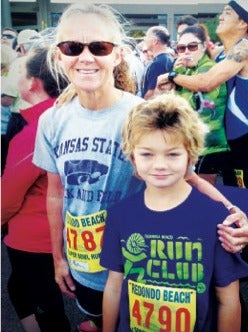 Renee Williams-Smith paved a path for high school female runners when she stitched her own cross-country uniform together in order to compete among the boys. At the time Mira Costa High School in Manhattan Beach, Calif., had no other option for girls. Decades later, Williams-Smith accepted a coaching role there after noticing that while the school now had a girls’ team, it lacked critical support. Her efforts earned her the Brooks Inspiring Coach of the year award in 2014—an honor she carries over to her 10-year-old son, Luke, who has already adopted his mom’s athleticism.

Like many running mamas, Williams-Smith introduced Luke to the world of endurance at a young age via jogging stroller. As he got older, Luke’s bike replaced the stroller during her runs. The shared running life has now become second nature to the duo.

“Now he’s joined a little running group at school. I volunteered one day to run with them,” she explains. “It’s so refreshing to watch kids run. They jump over fire hydrants and climb trees in the middle. It’s just a fun thing for them.”

Related: Retired Marathoner Paula Radcliffe On Being A Mom

This pleasant reminder of the joyous side of the sport benefits Williams-Smith as a professional high school coach as well—many of the girls turn to her as a “second mom”—helping her remember that it’s not always “all about pace and how far you’re running.”

Luke’s natural young spunk combined with Williams-Smith’s years of running experience allow the sport to serve as a bonding method between the mother and son—something she hopes to carry between them for a long time. “It just something that’s natural to us now,” she says.

TIPS FROM THE COACH