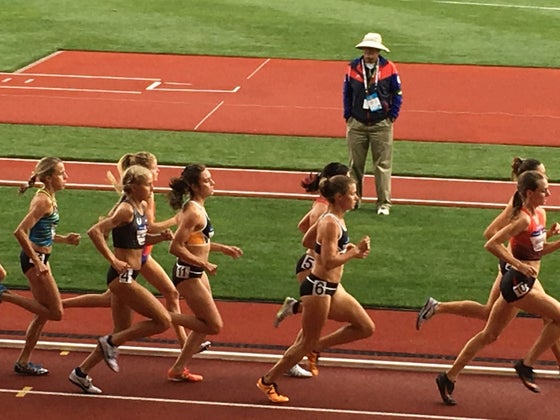 What the heck happened on the last day of the Olympic Trials?

We can’t believe it’s over! After 10 days of incredible track and field action, the last of Team USA was finally minted and Eugene fans packed it up for good and left historic Hayward field. Today’s finals included the women’s heptathlon, pole vault, 400-meter hurdles, 1500 meters, 5000 meters and 200 meters; for the men’s side, the high jump, 400-meter hurdles and 1500 meters did their thing. The level of athleticism was only matched by the tenor of emotion. Almost as fun as watching the races was seeing the pure joy from the faces of the athletes as they punched their tickets to Brazil.

Who had the best celebration?

It’s impossible to choose, but we loved watching Dahlia Muhammad fall down on the track crying with happiness after she shaved nearly a second off her personal best time to cross the line in first place in the 400-meter hurdles.

We love watching the 5,000 because it’s a race we can relate to! If you’re a runner who likes racing, chances are you’ve probably raced this distance (unlike say the 400-meter hurdles)—so you know exactly how insane it is for women to run this freaking fast. Also, it’s long enough that you can really sit back and watch the action unfold.

Molly Huddle and Emily Infeld (who both made the team in the 10,000 meters on day 1) lead from the gun. The group laid down a slow pace (for them!) in the first lap (78 seconds) and then slowly cranked it down. The slick track caused a bit of a tangle and the gifted Nicole Tully fell and couldn’t get back up. For laps, the formation of Huddle and Infield stayed the same—then in the last lap, Huddle turned on the jets, breaking away from the field. Shelby Houlihan and Kim Conley followed sprinting it out to the end. How fast did the run? A cool 15:05, 15:06 and 15:10 respectively. That’s crazy—but most impressively Huddle threw down a 63-second 400 for the last lap. To break that down, that’s a 4:12-mile pace at the end of a 3.1-mile race.

Any other amazing finishes?

Funny you should ask, the drama at the finish line was on fire today. Because the top three in each event go to the Olympics, the final of the Olympic Trials is truly a race for third. Fourth place is the heart-breaker.

In the women’s 1500 meters, Brenda Martinez (the middle-distance runner who tragically tripped during the finals of the 800 meters alongside Alysia Montano), was fourth going into the final 10 meters of the event. She kicked her heart out, going for broke as she and Amanda Eccleston both leaned so hard they fell face-first across the line. The crowd was silent for a few seconds as officials reviewed the tape to see whose chest crossed first—and then erupted in applause when Martinez’s name showed up on the screen. Redemption!

In another nail biter of a race, Nike superstar Allyson Felix and former Oregon Duck Jenna Prandini were neck in neck (literally) crossing the finish. Prandini threw herself across the finish, catapulting into a forward roll. The effort was worth it when the screen showed that she had bested Felix by a mere hundredth of a second. The times were 22.53 seconds and 22.54 seconds respectively.

Rio, baby! The team has an incredible squad and we can’t wait to watch them crush it in Brazil. Go USA! Can’t get enough Trials action? Read all of our coverage here.

These American Women Hope to Hurdle to Victory