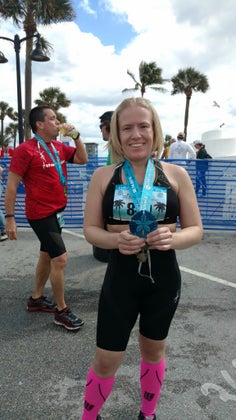 In March of 2012, at 29 years old, I was stressed out, weighed 170 lbs and was in a verbally abusive relationship. I needed a change. My goal was to complete a 5K.

My strength was tested many times. In May 2012 my mom was hit by a car while walking on the sidewalk, injuring her leg and her head. A year later, she was diagnosed with moderate to severe dementia. She could perform household tasks but not hold a conversation. In February 2013 my beloved horse died, leaving me devastated.

I turned to running. I ran sporadically the first year but completed three 5K races—the first in 45 minutes. I decided to run the Boilermaker 15K on my 30th birthday.

I ran for my mother. I wanted to give her everything I could. Underprepared, I ran 15K. Because of hot and humid weather, I had to dig deep to finish before the cutoff. I cried at the finish. After I signed up for my first half marathon. I also decided to someday run the Boston Marathon for my mom.

I realized I could succeed at distance running. So I signed up for another half marathon in March and my first full marathon on October.

Sidelined by my injury, I had to be realistic. I learned that running my first marathon should be more about finishing. I did finish my first full, and I was able to get an extra race medal to give to my mom.

Even though I had suffered injuries to my foot and IT band, I continued to train for half and full marathons. Running had helped me cope with loss and the threat of loss. I gave it my all. I even signed up for a 39.3-mile challenge in Maine so my parents could see me run.

Because of the struggles I have faced, I was able to help a friend get through her first half. As we crossed the finish line together, I said, “I told you I would get you to the finish.” It was an amazing feeling.

Three months later, I lost my mom. I wanted to give up. I wanted to stop running. I felt like my dream and goal of running the Boston Marathon meant nothing anymore without my mom there. But while I was home, my friends and family told me to go out and run.

I picked up running again, yet it didn’t feel the same anymore. My friends encouraged me and would not let me give up. They told me I could still run for my mom and that it would help me. I didn’t believe them. I continued to struggle. However it helped me escape the hurt and pain my heart felt. I ended up signing up for the Marine Corps Marathon and began running for me.

“I love you and miss you, but it is time for me to run for me. I will run in your memory, but not for you.”

I have never done things for me. I have always done things to make my parents proud of me. However running has taught me that I can do things for myself. So on Feb 14, I ran the A1A Fort Lauderdale Marathon for me.

There were many times I could have given up with running, but I didn’t. I do not quit.

The Wrap Up: How Jess Gillman Crushed Her Goal in Boston