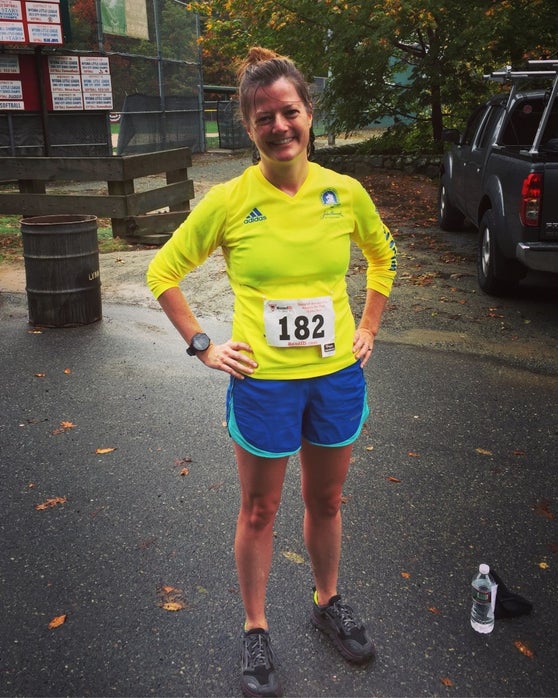 I had a disastrous experience running the Vermont City Marathon over Memorial Day Weekend in 2016. It was my fourth marathon, but my first during a major depressive episode. I dropped out of the race at mile 16. Never mind that the race officials called off the race due to extreme heat 20 minutes later. The disappointment gave my personal misery new fodder for self-blame. Rather than just train harder, I realized that I had to do something more to help myself out of the black hole I found myself in.

Blogging about running, I decided, would strengthen my resolve to keep going despite the setback, so I permitted myself the creative indulgence. And with that a blog about a very average runner beating back a fairly serious depression problem, was born. Blogging led to therapy, which led to Prozac, and ultimately I came to realize who and what I am, which is a high-functioning and over-achieving depressed person. I don’t know if this is anyone else’s reality, because the number-one goal of a high-functioning depressive (whether they run or not) is to pass for normal. Not just normal, but optimal. I, for one, haven’t come across too many confessions like the one I am divulging right now.

In my teens and 20s I created effective ways to hide my fears and self-loathing from others. As a result I slowly lost my ability to connect with other people in a healthy way at the stage in life meant for finding yourself, pairing off, and putting down roots. For most if not all of my early adulthood I felt very alone in the world.

Here’s what I did (I don’t recommend it):

Taking up running was a stroke of genius as a high-functioning depressive. It relieved my stress. It exhausted me. Running became at times an obsession that supplanted my fears. It sometimes felt like the only thing standing between me and the abyss of a major depressive episode. It was a lot better than drugs and alcohol, but that was only half of the picture.

There is nothing this anxious and depressive person loved more than some alone time for self-abuse and destructive thinking. Enter running. It provided ample time to ruminate on my problems and personal failings, real and imagined. Even running itself became a source of personal admonishment: Why didn’t I run faster? Why didn’t I train harder? What’s wrong with me?

I didn’t need people to pursue running. It was a perfect excuse for declining all manner of social engagements. It provided me with a disarming and relatable conversation topic when making small talk. As a result, nearly everyone thought I was the picture of health and so together.

Running will not cure depression. The unpleasant truth is that running, like other seemingly noble pursuits, may just be a ruse employed by the highly effective depressive to stay separate and at one with her self-destructive tendencies.

Related: From Depressed And Overweight To Boston Qualifier

I DRANK A LOT.

Running curbed compulsive drinking, thankfully, but that’s not to say I didn’t drink. A lot. To excess. I drank to get drunk on the weekends, with so-called friends and classmates. On any given Friday night I vacillated between sad drunk, angry drunk, volatile drunk, even blackout drunk. Stress and anxiety left me otherwise incapable of feeling real emotions. Sadly this behavior wasn’t unusual or atypical for my age group or demographic, so no one, including me, saw my drinking for what it was, or eventually became, which was my only means of emotional release.

I RACKED UP EMPTY ACHIEVEMENTS.

Another trick? Achievement gathering. It didn’t matter if the pursuit suited me, as long as I was working hard, and everyone knew it. It’s the last bit that mattered most. Working hard is an unimpeachable character trait, so I embraced it. I strove to embody it. I was supposed to be smart and I was supposed to go places. In case you haven’t figured it out by now, shame is another potent feature of depression. It worked, in the sense that I was able to make strides toward fixed goals.

Along the way, I discovered that I was liable to fall apart without a goal, or even worse if I failed. Oh, boy—do not get me started on the high-functioning depressive’s relationship to failure. That is an abusive relationship if there ever was one. My goodness. And necessarily, I failed at things. Lots of things. Because I am not perfect. Because I chose goals without any consideration of my own personal happiness. And I was defective, because I had untreated depression and anxiety.

If failure was my kryptonite, then achievement was a sick and twisted enabler of my depression. No achievement, no matter how hard fought, brought me satisfaction. It was quite the opposite. Graduating from college and then law school left me panic-stricken each time. These were acutely horrible experiences. I was deeply afraid of what the future had in store for me.

I CHOSE SOCIALLY ACCEPTABLE EXCUSES FOR MY MISERY.

(Who thinks marathon training fits the bill here? Anyone?)

I chose law not because I was interested in practicing law, per se, but because it was a safe choice that is also one of those discernible markers of success. How could I be a head case and also a practicing attorney? It was a shallow reason, but I couldn’t go deep. I couldn’t ask myself the tough questions. That was too risky. Besides, I was too busy studying. Law school was very hard. It took three years of full-time study plus a summer cramming for the bar exam. I could safely be miserable without anyone questioning me. For real. I used to think like this.

Depressive realism is a theory of cognition that cynicism, in all its guises, may actually permit the cynic to see the world more accurately than optimistic persons. The world-views of depressed persons are somehow more realistic and discerning. When I first read about this theory (in the New Yorker, of all places) I distinctly remember a powerful feeling of personal validation coming over me. I came to believe that my depression made me some sort of truth seer. It was armor against a harsh and cruel world. This was a particularly bad development for me. No good could come from this theory. And yes, that’s all reported in the literature too, but so what? Little good that did me when I’m going around thinking, “There is no God and life is pointless.” I felt right, I felt affirmed, but I also just felt bad, really bad, if not worse than ever.

WHY TALK ABOUT IT NOW?

Anxious and depressive me is snickering and saying, “This is SUCH a waste of time. No one cares about this psycho-babble.” This may be true. But it’s also quite possible that someone might read this and recognize herself in these words.

All depressed persons are not sitting in front of a flickering TV in a dark room eating chips. Sometimes they are, but they are just as likely to be hunched over a keyboard punching out a legal brief, or heading out for one last 20-mile training run before a marathon. The depression and anxiety they feel is no less real just because they do a good job presenting themselves as healthy and normal. In fact, I would argue that depression is almost more dangerous and insidious for the high-achiever because the effort and energy expended on building the ruse, racking up empty achievements, and justifying a miserable existence allow the illness to flourish unchecked.

That is not to say it wasn’t detectable in me! Those failures I referenced above? Oh yeah, in those instances my anxiety and self-loathing came down on me like a hammer. I ruined a few professional opportunities because of my poor coping skills. I destroyed—I mean I decimated—several personal relationships during the decade of hurt. I internalized these events in my life as evidence not just of my worthlessness but of nastiness. In short, I not only believed I was worthless but also a bad person, too.

GETTING HELP IS HARD TO DO.

Admitting weakness and accepting help is difficult to do, especially for the high-achiever. It’s crucially important to do so. Expending effort to cover up shame and self-loathing is a waste of precious time and a misdirection of talent! Sisyphus’ boulder is nothing compared to the weight of anxiety and depression on a high-achiever. There is no end run around this boulder. There is no short cut up the hill. Stop, take stock, and open up to a professional. Take the Prozac if it’s offered. The boulder will get smaller and less burdensome over time, but the first step is to acknowledge that it’s there. Admit that it is heavy. Go ahead. It will be better. If you’re anything like I was, you don’t believe in “better.” Better is a meaningless word to you. But you’re wrong about that. It does have meaning, and life has meaning. It can, if you let it.