I don’t know about you, but I’ve been chuckling over Hero the Hedgehog’s antics since the track and field world championships started last weekend in London. Hero’s been causing a stir ever since he jogged onto the field as the championships’ official mascot, bringing sass, humility and fun to the crowds in equal measures. One minute he’s holding a “motivational” sign during the men’s 10,000-meter final, reminding athletes, “Only a TON of laps to go.” In the next, he’s waving his paw in front of his snout in complaint as Usain Bolt unties his racing spikes. It’s unclear exactly how much of this his creator, 9-year-old Elinor from the West Midlands, imagined when she submitted her mascot design for consideration earlier this year. Either way, fans and the competing athletes are loving it. Here are some of Hero’s best moments so far. 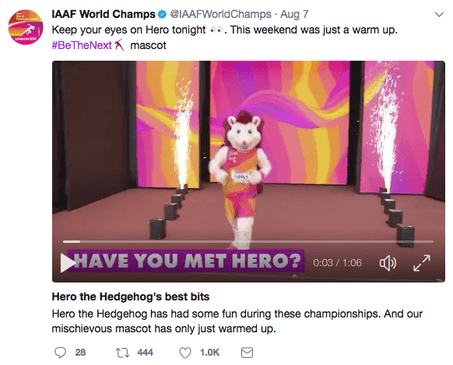 Hero started strong by dancing and striking poses as he entered the stadium for the first time last weekend. 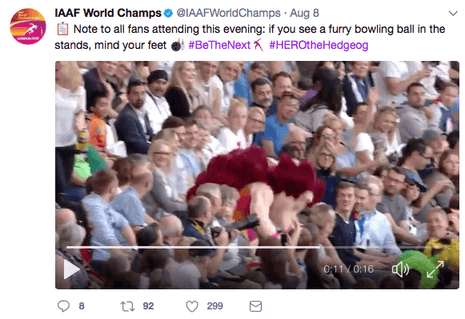 In true hedgehog form, Hero started somersaulting down the stadium steps—high-fiveing fans along the way, of course. 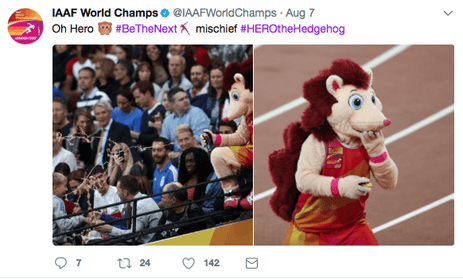 We started getting a sense for Hero’s mischievous side when he pulled out the silly string. 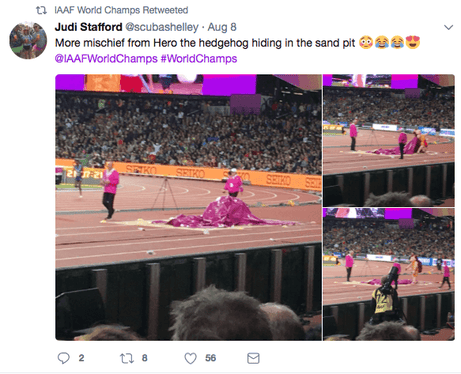 We also learned he isn’t very good at playing hide-and-seek. 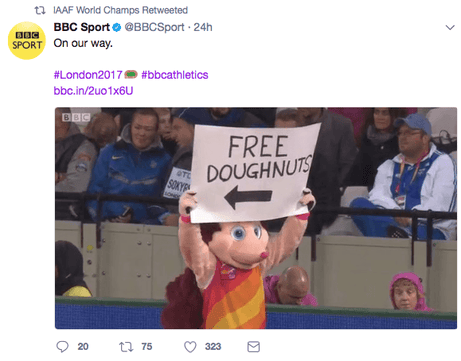 But he does know where the tastiest snacks are kept. 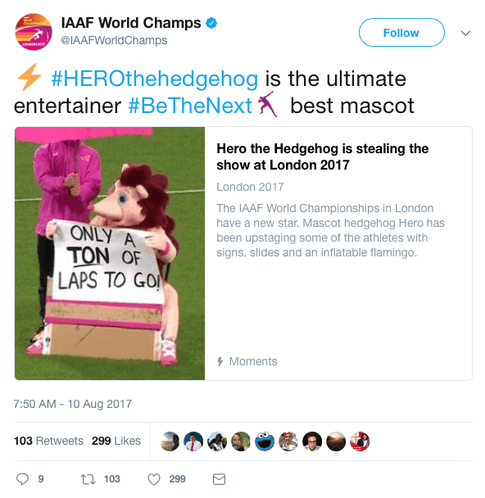 Speaking of signs, he needs to work on the motivational angle a bit more. 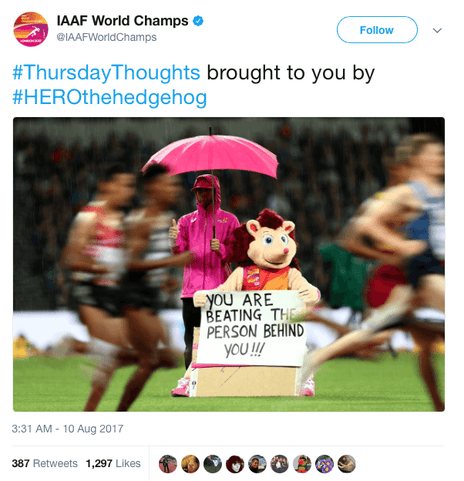 His signs are pretty funny, though. 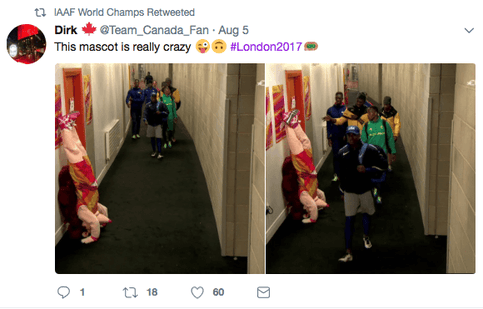 Hero spent some time bonding with the athletes off the track… 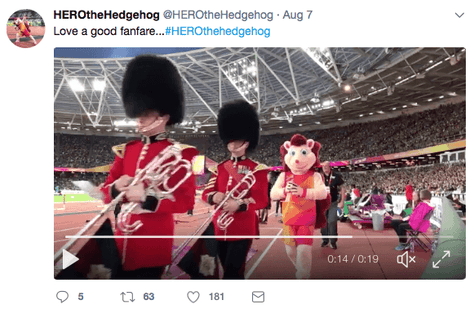 …and briefly tried to blend in with the Queen’s Guard. 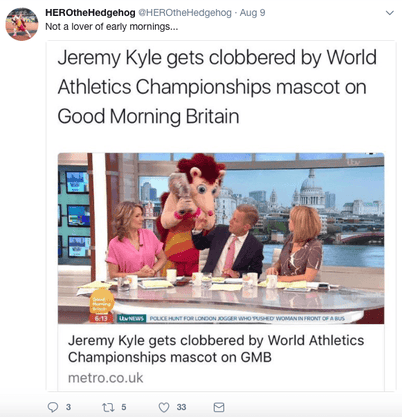 He’s not really a morning hedgehog… 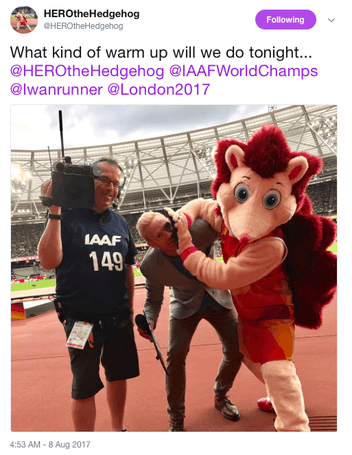 …but he does enjoy making new friends. 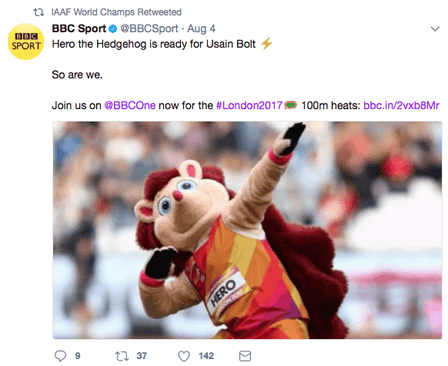 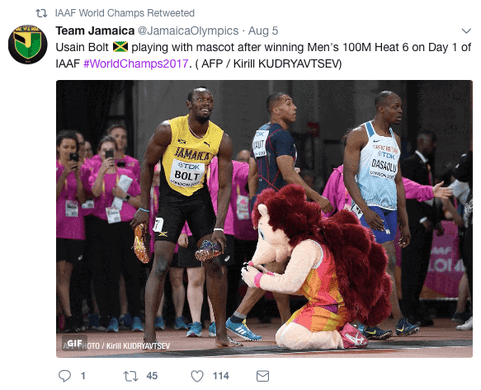 Though he complained about the smell of Bolt’s shoes after the sprinter finished one of the 100-meter qualifying rounds. 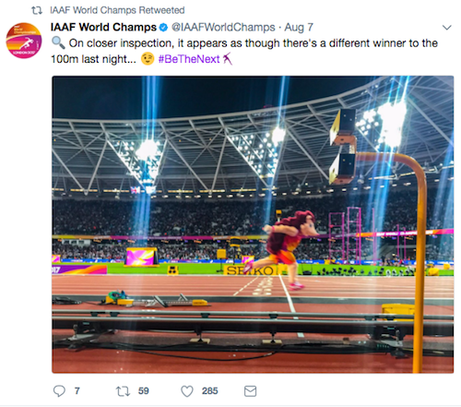 In fact, some believe that Hero was the real 100m winner. (Usain Bolt and Justin Gatlin who?) 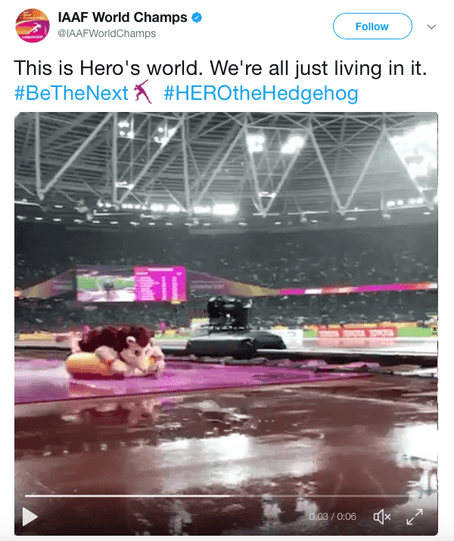 Perhaps most amusing of all was Hero’s excitement over the rain. He totally would’ve won the gold if inner tubing was an official event. 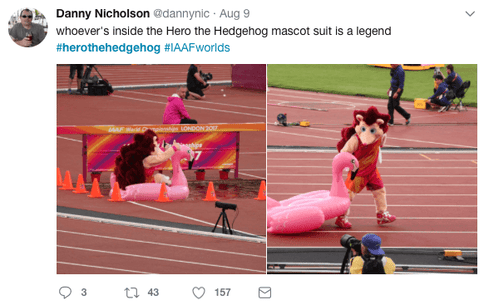 Hero also adapted the water pit on the steeplechase course, making it his own private pool. 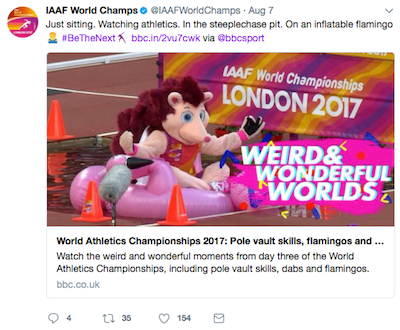 Being the official mascot can get tiring, so Hero took a moment with his favorite flamingo floaty to meditate the stress away.

The Craziest Moments You’ve Missed At The World Championships

Athlete Refugee Team Sponsored By On At 2017 IAAF World Championships