The largest of the Hawaiian islands is so big that you’ll stay quite busy trying to see the whole place in a week. It’s also so quiet that you don’t have to be concerned about hordes of tourists or even the fast city pace of Honolulu (which is on Oahu). The island of Hawaii is ideal for nature lovers who want to experience amazing beaches, lush rainforests, hills that make you feel like you’re in Ireland, volcanic terrain and more.

We experienced all of this in about 36 hours participating in the inaugural Ragnar Relay on the island of Hawaii last fall. The race, with teams of 12 or fewer runners divvying up 200 miles, goes from one side of the island to the other. You get scenic views whether you’re laced up on your designated legs or your van is on break and you have time to detour to amazing spots nearby. But the island plays host to dozens of other races, so whenever you can go, try to add one to your itinerary. Of course, you can happily run on your own too! There’s a lot to choose from to entertain and decompress, but here are our top reasons why we love the Big Island for the ultimate runcation. If you fly into the airport in the Kona district on the west side of the island, you’ll literally land in the middle of the dried black lava. It’s otherworldly with a mixture of hardened smooth pools or flows and more jagged, rough surfaces. If you’ve ever seen the IRONMAN World Championships on NBC, the finish of the marathon through the desolate lava fields is iconic, and running through this hot, hot, hot area as part of the Ragnar Relay connects you to the earth more deeply than driving by. Bonus: You’ll get better views of the goats that live in the fields. Whether you order a dish encrusted with macadamia nuts or a side of papaya or the raw fish (mmm, poké!), you’ll enjoy the visit more when you eat local. To keep fueled for running, head to Tex Drive-In for hot malasadas—the Portuguese fried doughnuts come with all kinds of different yummy fillings like mango, guava or Bavarian cream. After a run, you won’t be able to resist a trip to Original Big Island Shave Ice Co. (above), to cool down from the inside out. 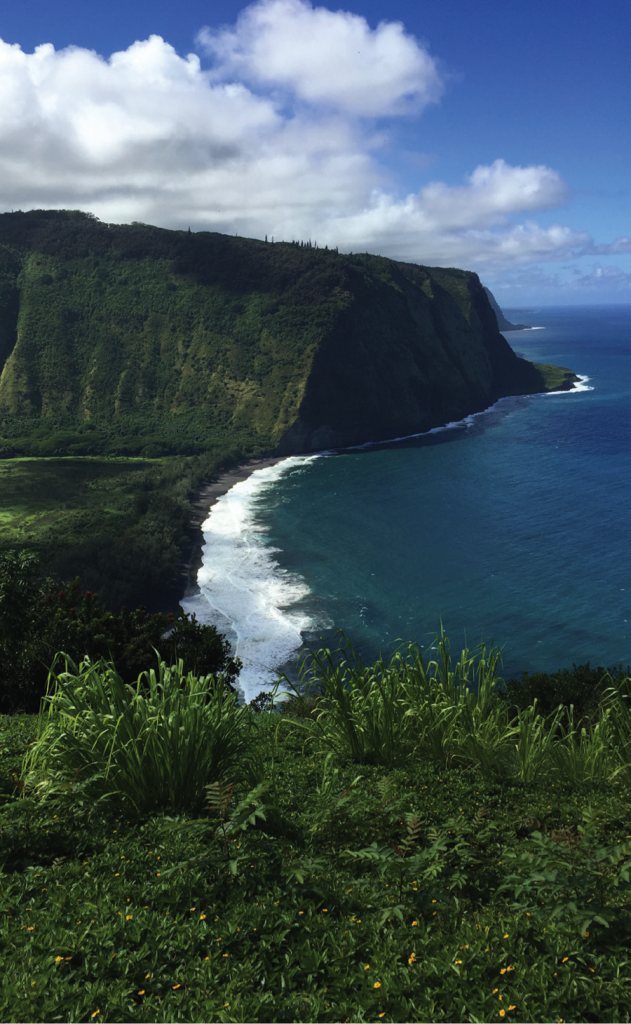 There was a stretch of the Ragnar course along the north side of the island where I came upon some kind of waterfall at nearly every bridge or bend in the road. Our van took a detour to the Akaka Falls. You can’t see them, but you will learn shrimp swim 2.5 miles from the ocean to reach and climb the 442-foot waterfall, all in the name of procreation. Another must is a stop at the Waipi’o Valley Lookout, where we weren’t the only Ragnar team taking advantage of the photo op. Two facing cliffs sandwich a sacred valley below. 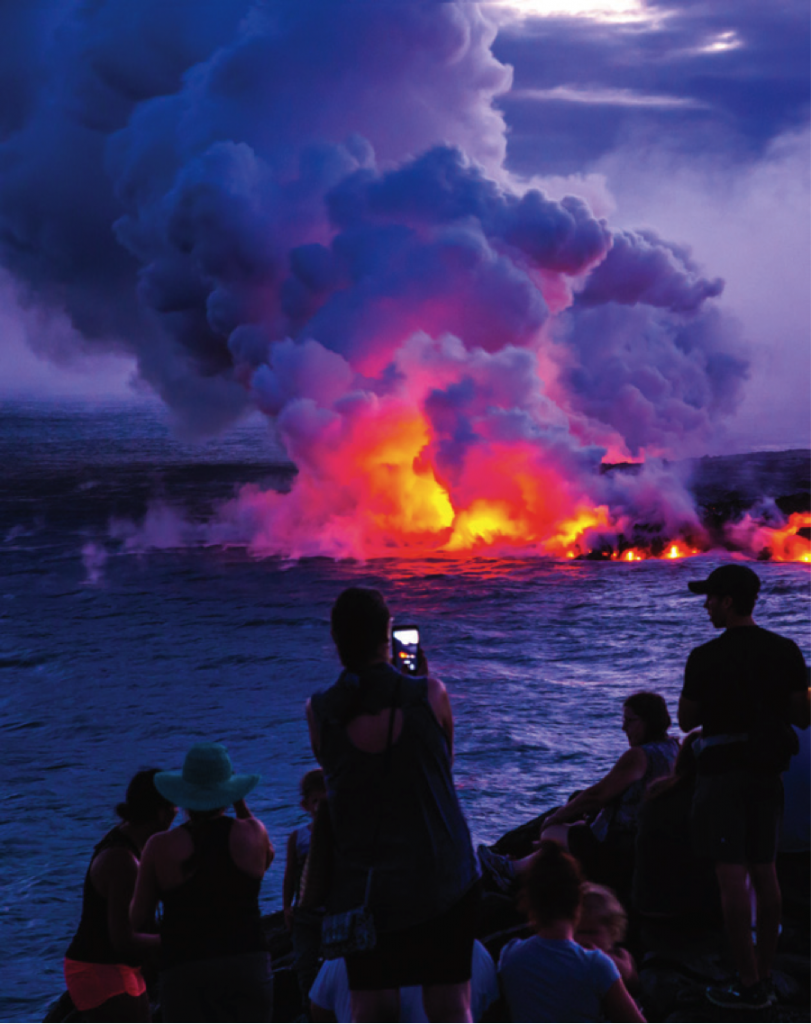 Chances are you don’t live near an active volcano. Take advantage of the island’s natural splendor with a visit to Hawaii Volcanoes National Park. We went on a biking tour with Nui Pohaku, an adventure company with the most knowledgeable guides. This was a great way to stretch our legs and see areas off-limits to cars. When we were on the island, actual hot lava was flowing into the ocean (this doesn’t always happen); especially as the sun set, you could easily see red-hot flow beneath billowing clouds of steam produced as it hits the ocean water. The flow is far from the main area, and you have to go a couple of miles by foot or bike to get there. The crushed-gravel road makes for a picturesque trail run as you pass by small homes built atop dried lava. We were charmed by different kinds of lizards, turkeys and chickens alongside—or crossing—the road, crabs camouflaged on waterside rocks and goats in the lava fields. The various birds provide a soundtrack for your runs. On one of my Ragnar legs, I saw what looked like a flat squirrel darting across the road. A mongoose! We were on the lookout in the national park for the nene goose, but, alas, we didn’t spot the rare species. Also, one of the highlights on the water—with possible views from land—is the spinner dolphins that corkscrew up into the air. Keep your eyes open! If you’re in Hawaii, you must get out on the water. We went on a snorkeling trip with Captain Zodiak and were treated to glimpses of octopus, reef sharks and copius colorful fish. We also went diving with Kona Honu Divers, which offer a nighttime manta ray experience. It’s worth Googling a video to see the dive, which also has a snorkeling option. The 2,000-pound manta rays (they are harmless with no stingers) glide by you as they filter their plankton dinner that flocks toward the lights that the dive boats set up. If you want to stay closer to shore, Kamakahonu Beach in Kona is where you can swim like an IRONMAN athlete—or at least where they do. 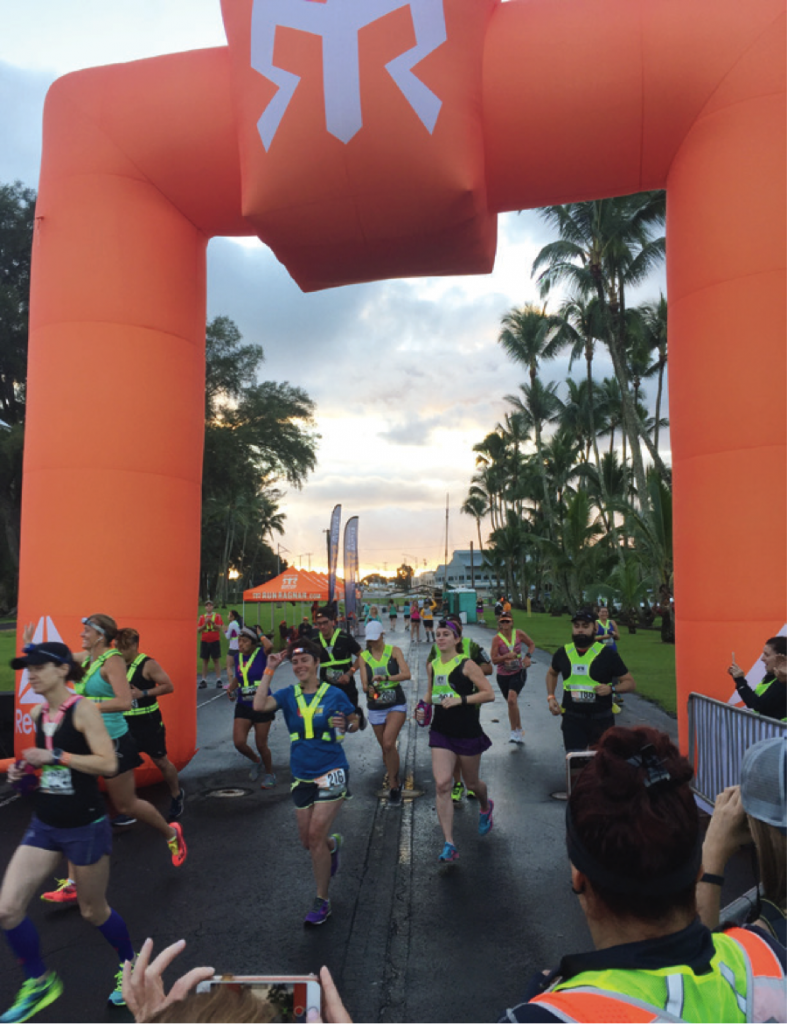 Ragnar will be returning Nov. 4–5 and sells out quickly with space for 300 teams. Be forewarned, there are some serious hills and the heat can be a factor, so make sure your team does its research and trains for the course. The island is home to tons of other races, like this month’s Kona Brewers Festival Run for the Hops (cheers to that!), June’s Kona Marathon and August’s Volcano Rain Forest Runs, which includes a half marathon, 10K and 5K. Chances are you’ll find an event whenever you want to travel, and it’s a great way to have a supported run. We love running and beer in nearly equal measure, so we not only taste-tested our way through the menu at the Kona Brewing Company, but we took a tour too. Put this on your Hawaii to-do list if you’re interested in a glimpse into the extensive beer-making processes. The Ragnar finish featured thirst quenchers from Big Island Brewhaus, located in the ranch-country area of Waimea. We were inspired to head there the next day (pictured above)—a perfect pit stop from Kona to Hilo where the huge food menu is only rivaled by the extensive beer selection. 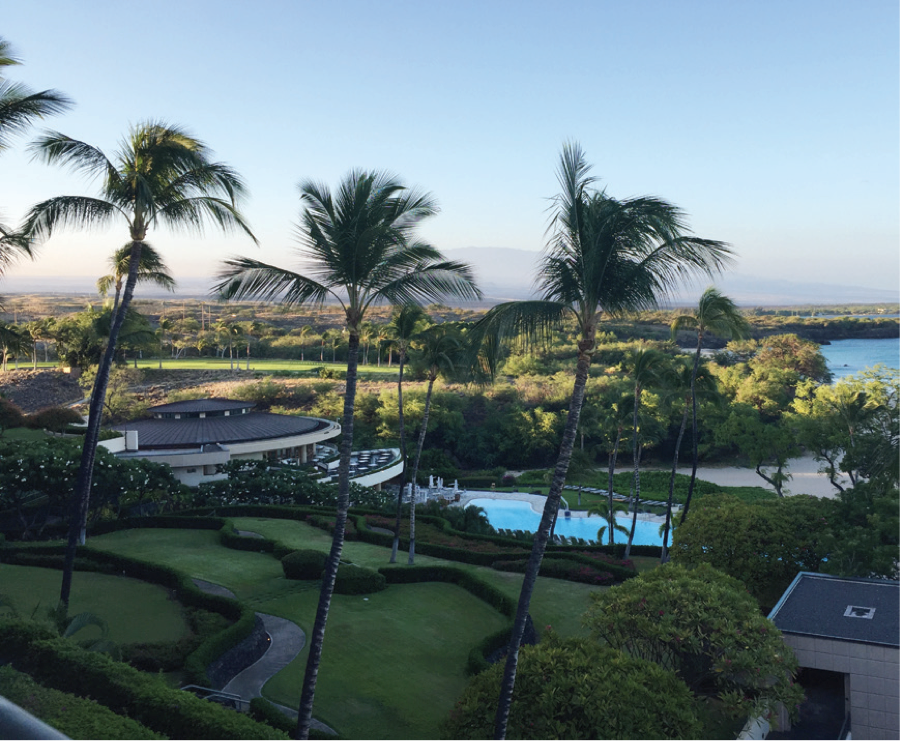 There is something to be said for hearing the ocean waves crashing outside your room. The Hapuna Beach Prince Hotel is close to shore—plus the open-air environment of the property brings the outside in. Complimentary snorkel gear will get you in the water when you have a free hour. It’s also located by the Ragnar finish and we saw many other teams getting a pretty good night’s rest (and shower!) here—much better than sleeping in a stinky van. Across the island on the rainy side, the Hilo Hawaiian Hotel overlooks Coconut Island—and waking up to a double-rainbow balcony view will make you want to skip that plane ride home. We found ourselves using this hashtag promoted by the local tourism board a lot. Even though we had a packed schedule to see and experience as much as we could, we stayed open to what would come up. We went to Lava Lava Beach Club for dinner and were surprised by some amazing live music and stayed till the end of the night. If we had more time, Kona’s bikeshare looked like a great way to explore that area. We meandered around the huge, beautiful banyan trees in Hilo. When there was a sign for a short scenic detour, we took it and were rewarded with a drive through a dripping rainforest and stellar view over what could have been our own private beach—if we didn’t have to get to the next Ragnar exchange.

What Makes Curaçao One Of 2019’s Top Race Destinations

What You’ll See Along The NYC Marathon Course

Friends On The Run: How Race-cations Create Friendships For Life