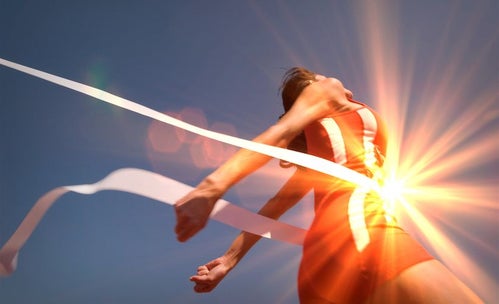 Jennifer Watson has run seven marathons–and she’s cried at the finish line of every single one.

“Each time there was something different that initially triggered the reaction, but the disbelief that I just ran 26.2 miles is probably the main reason,” said Watson, who is a group exercise instructor near Tampa, Fla.

She’s not the only one weeping at the finish line. Watson is one of many runners that get a little choked up at big races and big finishes.

“When individuals accomplish something, like winning a tennis championship or finishing a big race, they often feel overwhelming emotions,” said Dr. Oriana R. Aragón, an assistant professor at Clemson University’s College of Business. Aragón has completed numerous studies on the expression of emotions.

“There is a strong sense of accomplishment and pride,” Aragón added. “When those emotions become highly intense, they seem to manifest in physical expressions that, on the surface, look a little contrary to how one is actually feeling on the inside.”

Aragón published her findings in a 2017 study, called “So Happy I Could Shout!” and “So Happy I Could Cry!” Dimorphous expressions represent and communicate motivational aspects of positive emotions. In the study, she found that happiness could be expressed through “physical displays that, without context, would appear to be sadness.”

“When I see those happy tears, the research and my human intuition tell me that the person is overwhelmed with positive emotion, and…he or she needs to stop for a moment to take it all in,” Aragón said.

For many runners, crossing the finish line of a race is a major achievement, a culmination of weeks and months of training. It’s as good a reason as any to cry, but for some, like Temecula, Calif. runner Kansas Spousta, a solid training run is enough to trigger the waterworks.

“We had to cut our run short and ended up at 15 miles,” Spousta said of a training run. “This was the furthest distance I had run ever. As I saw the car, where the run would end, I was filled with such emotion and cried the last quarter of a mile. I have an autoimmune disease where many aren’t able to be this athletic due to chronic fatigue, inflammation, digestive issues and weakness. I started running only a year ago and I am so thankful for my body’s ability to defy odds, doctors and even my own mental barriers I’ve placed.”

Spousta, who is training for the Los Angeles Marathon next month, will run the race for the ALS Association in honor of her grandfather, who died of ALS in 2007.

“The feeling like my grandpa was there (on that run) was overwhelming,” Spousta said. “I felt like he was proud of me doing this and it was, in a way, his approval of my race.”

There are hundreds of stories like Spousta’s, where men and women find themselves crying as they think about who or what cause for which they are running.

But most tears seem to come from victory moments.

“If the athlete is in a state of goal completion, they will be more likely to have an orientation of reflection, relief, wanting to stop, rest or be still,” Aragón said. “If this is how they are feeling, the expression of crying is more likely to accompany their intense feelings of accomplishment.”

For Watson, that moment came in New York City.

“The New York City Marathon was probably my most emotional,” Watson said. “I love that city. To run that marathon was such an honor and a dream. I had my worst finish time ever and I felt awful, but I was so happy to have had the opportunity to run in a city that is so supportive of their marathon.”

Spousta’s race in Los Angeles will be her first marathon, and she said she’s expecting “some emotions” at the finish line. “I think the happy cry will come when my 3-year-old wants me to hold him and play with my medal while my husband hugs me,” she said. “It’s a cliché, but they’ve been my support for the 4 a.m. alarms, long runs and ‘hangry’ wife and mama.”

Watson, meanwhile, said she is preparing for the Big Sur International Marathon in April. She’s already sure the California race will lead to a few happy tears. “Like every other marathon, I don’t expect an emotional finish, but most likely it will happen,” she said.

The Ugly Part Of Marathon Training No One Talks About