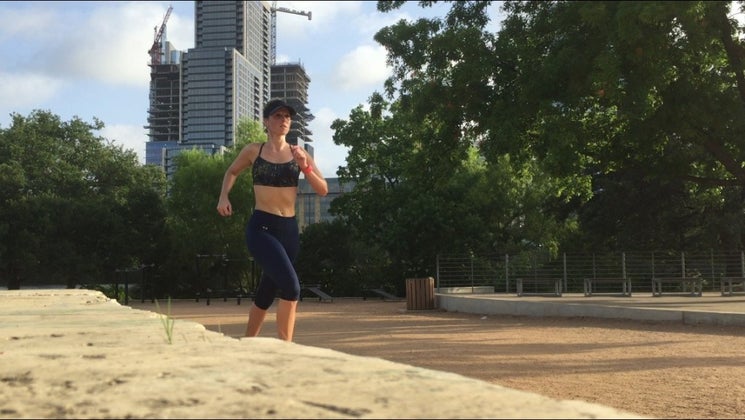 Summer is here in full force, and it’s hot as Hades across the country. Temperatures are particularly brutal where I live in Texas, regularly reaching the triple digits and seeing heat indices near 110 degrees. We’re talking an insufferable, disgusting, smother-you-with-a-wet-rag type of heat.

I’ve tried all the usual ways of staying cool on summer runs—pre-cooling my body, wearing moisture-wicking clothing and running early in the morning (seriously though, I can’t get up any earlier)—but I’m still a literal hot mess no more than five minutes into my run.

I had another ‘stay cool’ option to try, but for me, it was so far in left field that I had pushed it out of my mind for the majority of my adult life. It wasn’t some strange technology or overly expensive running apparel, and moving to a cooler climate was out of the question.

So what exactly was this last resort, only-in-desperation move, you ask? Going shirtless.

Running in only a sports bra meant there was nothing to cover my stomach and hips, nothing to hide my insecurities about my belly jiggling with each step and nothing to distract from my love handles that emerged when my pants rode a little too low. The idea of going shirtless brought to mind mean comments made about my body by high school bullies and the eating disorder I suffered shortly thereafter in my early 20’s. In my head, it was a bigger deal than just taking off my shirt—it aroused feelings of inadequacy and shame I was so familiar with during those dark times. And I didn’t want to feel that way again.

So I continued to suffer through steamy runs in the smallest and breeziest tank top I could find, being insanely jealous of each sports bra runner I saw, silently wishing I could be comfortable enough to do the same. But it was still hot and I needed more. Or less, in my case.

RELATED: The Reason Why You Should Join The #SportsBraSquad

I had seen hundreds of women donning only a sports bra during their runs, but in my mind, they had something that I didn’t: confidence. Oh yeah, and in many cases, washboard abs.

But then, something funny happened: I changed my mind.

I found encouragement from my friend and kickass triathlete, Ariana, and running blogger, Kelly K. Roberts, who had both discussed their own insecurities about running without a shirt.

I found encouragement from my boyfriend, who asked “What stomach?” when I told him I was embarrassed that my midsection that would jiggle when I ran.

But mostly, I found encouragement from within as I realized that I deserved to be comfortable and cool, regardless of what my tummy, hips and body looked like. I was no less deserving of a comfortable run than the lean and floaty college cross-country runners I saw on nearly every run. And it was time to put this notion into action.

Once I decided to lose my shirt, I felt something I never thought I would: relief.

As I stood next to my car in the parking lot, I took a very deep breath and shed my tank top. But what came next wasn’t what I had expected. Instead of feeling self-conscious, shy and ashamed, I instantly felt like a badass. My insecurities fell further back into my brain, behind the college graduation fears and middle school popularity woes.

So what if my body didn’t look like the chiseled gal speeding past me? So what if I didn’t have what society deems as the “perfect body” you see in magazines or on social media? I put in many hours a week at the gym and on the trail for the body I’ve come to know as my own, and I was done letting outside forces make me feel as if it wasn’t enough.

The only person who was going to tell me how to feel was me, and I was ready to let go of anything that held me back.

As I ran, I noticed a couple of girls eye my midsection and, admittedly, a few fleeting negative thoughts popped into my brain.

Oh my gosh, she noticed my belly. Why did I do this? It’s so flabby and unattractive.

But I started to notice a pattern: The few women I did catch looking at my sports bra-clad self all had shirts on. So while I was worrying about the way my stomach looked, they could have been wishing they were like me—shirtless and a lot cooler. I pushed out the pessimism and, instead, pushed my pace.

As the run got longer and the day got hotter, I was over the moon about my lack of concern and self-consciousness, which made my run even better. Not only was I much cooler, but I was much happier.

As the run ended, I was nearly beside myself about the progress I had made overcoming the negativity in my life, and I so badly wanted to jump around with glee, throwing my arms up in the air to celebrate the overwhelming freedom I felt. But I restrained myself because, well, there were people around.

And while I can’t guarantee this kind of epiphany for all of you once you shed a layer, I can guarantee one thing: People are much less concerned with your body than you think. And if there is someone who are overly occupied with what you’re doing, they are most likely dealing with bigger insecurities than you.

Running without a shirt wasn’t just a simple tactic to avoid overheating in the summer; it had turned into a statement that I had become okay with myself and the body I had worked hard for, regardless of what others thought or said.

My sports bra became a symbol of mental strength against the messages of false perfection that had been hammered into my brain from a young age. Now, as I open my drawer and see the row of sports bras in different colors and designs, I get to pick which one I will show off, instead of which shirt best hides my imperfections. And to be honest, there’s no better feeling.

I now challenge you to give it a try. Shed your shirt and actually enjoy your summer runs! If you hate it, put your shirt back on and be on your way. No sweat off your back (a little pun intended). But if you love it, let me know!

To support one of our own Team WR bloggers, Kelly Roberts, in her booming movement of shedding your shirt on the run, share your photos with #sportsbrasquad and share why every woman should do the same!