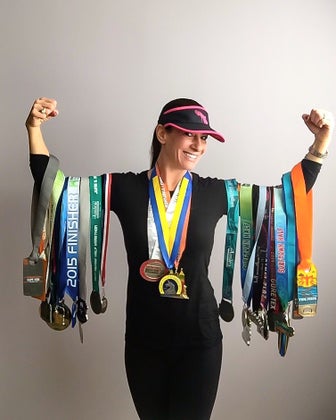 I wasn’t always a runner; in fact, I absolutely hated it growing up. Gym class was torture and I avoided all sports that involved running. I was still athletic and active in swimming, gymnastics, ballet and dance team, but no way was I running!

Once I went off to college, I ditched all of these sports except for dance, which I received a minor in. But with the lack of other physical activity and the excesses of college eating and partying, I ended up gaining 30 pounds.

I’m petite and never had a weight problem previously, so this sent me into a downward spiral. I lost my self-confidence and became nervous about what everyone thought of me. I became determined to lose that college weight. I joined a gym with my college roommate and got into all the 90’s-crazed workouts like step and aerobics classes. It worked—the weight started coming off, just not fast enough for me.

My weight-loss goals got the best of me. I began a five-year battle with anorexia and bulimia. This time in my life was so dark and lonely. The self-hatred was the devil inside and became all encompassing. I obsessed with food, whether it was starving myself or purging. It consumed me. It was something I would not wish on my worst enemy.

Fast forward…I was treated by several brilliant and compassionate professionals for my eating disorders. Thankfully they got me on the right track. Then I was lucky to meet my husband very soon after graduating from college. He was a lifesaver for me. He, along with my family and friends, were the support I needed to get through and onto the road to full recovery. I am thankful every day for the life he and I have, along with our two amazing sons.

Fortunately, 20 years has past since my period of disordered eating and body dysmorphia. I now view food as a source of energy—not an enemy. But it was not until I found the sport of running that I truly have discovered love and self worth. At the time, I was approaching a milestone birthday. I knew I had to set a big goal for myself, so I registered for my first half marathon in June 2011. As mentioned, I was always athletic and enjoyed working out, but running certainly wasn’t “my thing.”

I began at the gym, running on the treadmill a little bit. This is where I found my running chicks, my friends and running partners. I had never run a race before and had no idea what I was getting myself into. My days became filled with training runs. I downloaded a training plan and started to increase my mileage weekly. The longer my runs became, the more excited I was. I will never forget my first double-digit run. I was on cloud nine that entire day and finally felt what the “runner’s high” really is. I was fascinated that the sport I “hated” years ago was becoming something I could say I was falling in love with. More surprising to me was the fact that this body of mine was actually capable of running 10 miles. I was realizing that if you put your mind to a task, really anything is achievable.

The moment I crossed that first half marathon finish line was the most amazing feeling I could have imagined. For the first time in years, I truly believed that my body was fit, strong and beautiful! I wanted even more and was committed to making this sport a true part of my life.

What was more special is that I was becoming confident in this body of mine…and could call myself a runner. That first race five years ago has driven me to improve every race and to train harder each time. I have become faster, stronger and a smarter runner now. This sport has opened a new chapter in my life. It has inspired me with a renewed purpose to be a healthy example for my kids and others. I hope that my story inspires those with self-image issues to work through tough times and to persevere.

I have run 21 half marathons, four full marathons, three Ragnar Relays (the fourth one coming up this September) and numerous shorter distance races. Two of my four marathons have been the Boston Marathon. Clearly these are the highlight of my five years as a runner. I am originally from Boston and to run through the streets of all the eight towns of the course was the most amazing experience!

My first Boston Marathon was in 2015, and the weather was horrid (40 degrees and pouring rain). The low temps and the rain made for a freezing and unpleasant day. But I didn’t care; I was running the Boston Marathon! That day was one of the top-four highlights of my life. The day I married my husband, the birth of my two boys and the day I crossed the Boston Marathon finish line. On marathon day, emotions ran high. I sobbed as I approached the famous Citgo sign at mile 25 and I cried my eyes out as I crossed the finish line. I cried for the victims of the 2013 bombings, I cried because I was exhausted and I cried because I FINALLY loved that this body of mine, which I loathed for so long, carried me through the tough 26.2 mile course.

I was fortunate to run Boston again this year and unfortunately did not have the amazing experience I had last year. It was 78 degrees and sunny at the start line. The heat and I do not get along on race days. Heat like this is my nemesis. I knew from the time the gun went off that this was going to be a grueling day. Well, oh man, that was an understatement. I was so thirsty by mile 4 and by mile 10 I had stopped sweating (an indicator of dehydration). I almost called it quits several times, but I kept on, and accepted that a PR was not in the cards on this race day. Finishing was what mattered.

I was upset that all my training runs, which prepared me to have a PR, were not going to yield that kind of prize. But the pursuit of a second Boston Marathon medal and the honor of wearing my Boston race jacket pushed me onward. I didn’t want to have to call myself a quitter. I had to prove to myself that I could stay strong (Boston Strong!) and be a finisher. I pushed through lots of tears and doubt but I dug deep and crossed that finish line. The sense of pride and gratitude that my body helped me fight through this overwhelmed me.

Running has taken my body and my mind beyond anything I ever thought I could do. My confidence is at its highest, and, unlike 20 years ago, I know I can do anything that I set my mind to.

My love for running has recently ignited another one of my passions. I have always been a girly girl, worked in the fashion industry for years and decided that my next venture would combine my love for this sport with my love for fashion. I have ventured into a new chapter and have launched a women’s running apparel brand (Stiletto Running). Through my life’s journey and what I learned in becoming a runner….I have realized that women need to feel confident, strong and beautiful. #bethatsassygirl