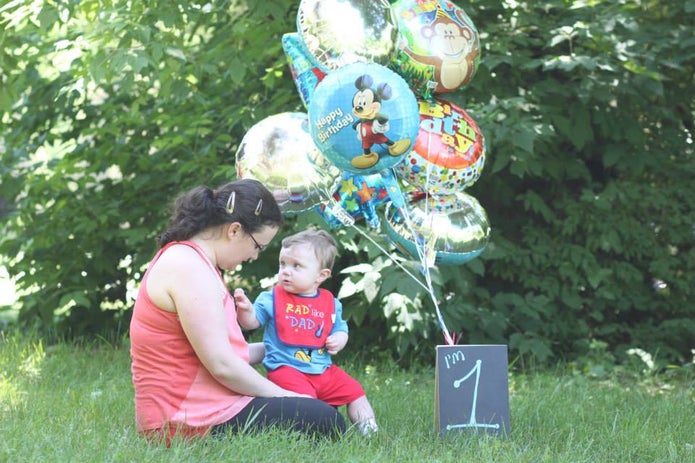 I have always been athletic, but after having my son in 2013, trying to make time for myself in the midst of raising him and working full-time was increasingly difficult. So I put a plan together to lose the weight so I could be a healthy role model for my son. It started with a goal to run a half marathon. I had three half marathons under my belt from many years before, so I knew I could do it again.

I started in the fall of 2014 with just simply taking morning walks with my son in his stroller. Also, making better food choices helped pave the way for a healthier me. Over time, the walks got longer and easier, so I began to add in some running intervals. Very slow running, but still running. As the months passed, I found myself stronger and healthier than ever! The daily exercise really helped me to focus more on daily tasks and that ultimately made me a better parent.

I tackled a minor injury along the way and kept on going. Before I knew it, I had lost 30 pounds and my half marathon goal race was upon me. Still recovering from a bout of hip tendonitis, I tentatively decided to still participate in the race. I vowed that I would go easy and my goal was just to finish. Three hours, 12 minutes later, I crossed the finish line. Not my fastest race ever, but definitely the most rewarding.

Related: Why First Half Marathons Are Just The Best

I knew as soon as they put that medal around my neck that I would be signing up for another race. I did, and less than 2 months later, in October 2015, I was crossing the finish line of the Detroit Free Press International Half Marathon, except this time in 2:31. I was on top of the world! I finished 2015 off with a 10K in November and a 5K in December. Goal for 2016 is my first full marathon!

Not only has running allowed me to improve my health by dropping weight, but it has also given me peace and happiness, and the motivation to keep going to be a strong role model for my son. It has taught me that if I set my mind to something, I can do anything.

Check out more from Michelle on her Facebook page.