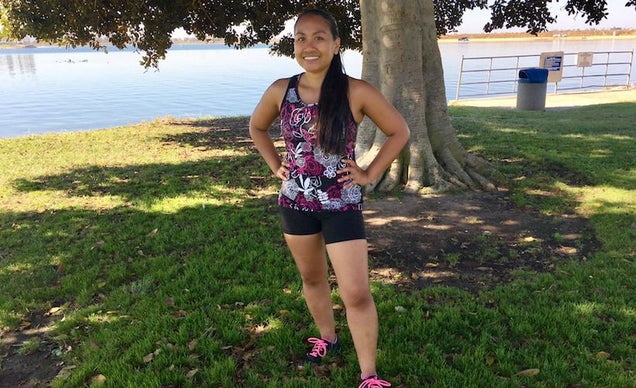 Fighting For My Country

My name is Marie Brown. I’m 35 years old, originally from Indonesia, and currently live in sunny San Diego. I’ve been happily married for seven and a half years and have been running my whole adult life. I also enjoy rock climbing, traveling, working as a high school youth leader, wearing bright clothes and eating chocolate. I’m also a disabled combat veteran with two serious chronic illnesses.

When I was 18, I enlisted in the Army. I chose Military Police as my MOS (Military Occupational Specialty). Like every other teenager out there, I felt I was invincible and could take on the world single-handedly! Never mind that I was 4’11” and 95 pounds. I was a healthy adrenaline junkie who graduated with honors from the U.S. Army Military Police School in Missouri.

In 2003, I deployed to Iraq in the very first rotation of Operation Iraqi Freedom (OIF). It was a wasteland filled with IEDs and hostile people, with both sweltering heat and freezing winters. My unit’s very first camp was built in the middle of a landfill brimming with trash heaps, mangy dogs and unexploded ordinance. We had to ration food and water. It was during this year-long ordeal that I realized that I was actually *not* Wonder Woman. My squad leader, whom I highly respected and idolized, was killed by an IED–and then, so was another close friend. I narrowly missed being shot by a sniper at one point and had a mortar round fall about six feet in front of me (thankfully, it was a dud!). Explosions constantly killed people (including children), things got destroyed and there absolutely nothing I could do to prevent any of it.

When I returned home, I weighed 75 pounds and was experiencing frequent periods of light-headedness, almost to the point of fainting. I was hospitalized for malnutrition, and my doctor’s orders were to “eat as much as possible every day.” I started to put weight back on, settled in to a new routine and launched back into my Army career.

However, about three years later, my health started rapidly declining. I had always been a very athletic person, but it became a serious struggle just to move. Within a year, I went from being able to run a marathon to barely being able to finish a 2-mile run for my PT test. I started experiencing severe bloating and often found myself vomiting for no apparent reason. One time, I started throwing up simply while standing in a company formation, thoroughly alarming everyone around me (and thoroughly embarrassing myself).

In 2008, it became painfully clear that I was no longer healthy enough to keep up with Army life. After nine years of service, I was given an honorable discharge. I had no contingency plans and no alternate ideas of what else to do. Thankfully, there was one VERY bright spot in my life at this point: in 2010, I got married! My husband and I had a small wedding and enjoyed a honeymoon in Hawaii. After we settled in together, we decided that figuring out my health issues was a top priority, and I began seeking treatment in earnest.

In 2015, after years of trial and error, the doctors declared that all of my symptoms were most likely the result of chemical exposure while in combat zones. I was diagnosed with Gulf War Syndrome (CMI), and my hearing loss, dizzy spells, occasional loss of balance and deterioration of the cochlea in my right ear added up to a diagnosis of Meniere’s Disease. Along with PTSD, I was given a 70 percent disability rating and my case was closed.

Having my illnesses properly diagnosed has been life-changing. I am no longer shooting in the dark, looking for cures. I have come to grips with the fact that there are no cures for this disease, and I will deal with the symptoms for the rest of my life. At the same time, I’ve been able to identify “triggers” and am able to do what I can to manage my number of drop attacks, migraines and pain episodes. I have never given up on running, and I still regularly place within my age division.

Last year, I was one of the finalists in the Women’s Running Cover Runner Contest; I also completed an Aerial Arts Instructor course. This year, I became a Skirt Sports Ambassador! Yes, traveling and eating gets complicated, and sometimes I can’t drive. When I’m in pain, I’m in a LOT of pain. My husband is a very patient and kind person, and without his support I have no idea how I would survive. My life is NOTHING like how I imagined it would be when I was 18. There are days when I still mourn the loss of my Army career.

In conclusion, I’d like to share one of my favorite quotes by Norman Cousins, a political journalist, author and professor who suffered from Ankylosing Spondylitis (AS) and heart disease: “Don’t deny the diagnosis; try to deny the verdict!”

She Survived Combat Wounds And Ran A Marathon

I Put Racing On Hold To Pursue IVF Treatments