Jemima Sumgong became the first Kenya woman to win gold at the Olympic marathon in Rio last year, and she just tested positive for a banned substance, EPO, according to Reuters. If her sample B test also comes back positive, she will be banned from competition.

“The IAAF can confirm that an anti-doping rule violation case concerning Jemima Sumgong (Kenya) has commenced this week,” the International Association of Athletics Federations (IAAF) said in a statement.

You may remember when fellow Kenyan Rita Jeptoo received a four-year ban in 2014, being stripped of several championship medals. Jeptoo and Sumgong, former training partners, shared the same agent, Federico Rosa, who was arrested last year and charged with doping a handful of athletes. However, the charges were eventually dropped, Rosa was in Rio with Sumgong and denied that there was anything suspicious going on.

And both Jeptoo and Sumgong ran the 2014 Boston Marathon—the year Shalane Flanagan ran the race of her life, setting a new American record and placing seventh behind both of the Kenyans. As is currently stands with potential and standing bans, it looks like that may soon move up to fourth. 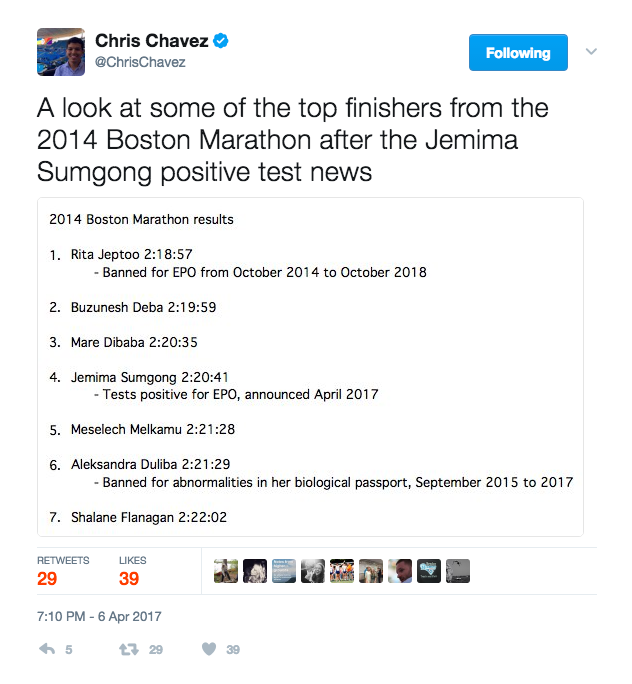 Flanagan, Desi Linden and Amy Cragg all competed in the Olympic marathon last year as well and had the strongest overall finish for the U.S. in history (all placed in the top 10). Flanagan found out about this unfortunate news around the same time she was awarded a silver medal upgrade after another failed drug test bumped her up. She tweeted this week: “What is real anymore?” 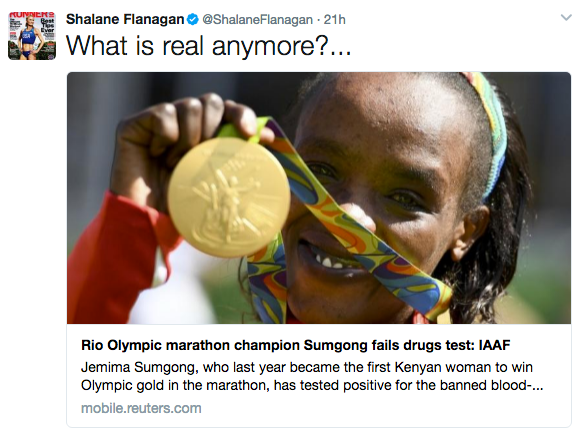 When speaking to Runner’s World regarding Boston and the Olympic marathon outcomes, she said, “Those are two races really high on my priority list and really meaningful to me. It meant years and a lifetime of work to try to achieve something special in those races,” Flanagan said. “It’s really disheartening and I have to be honest—sometimes I ask myself why do I even bother?”

Flanagan remains one of the top marathoners in the world, even if she will never know if she can be the absolute best. “That’s the nature of sport.”