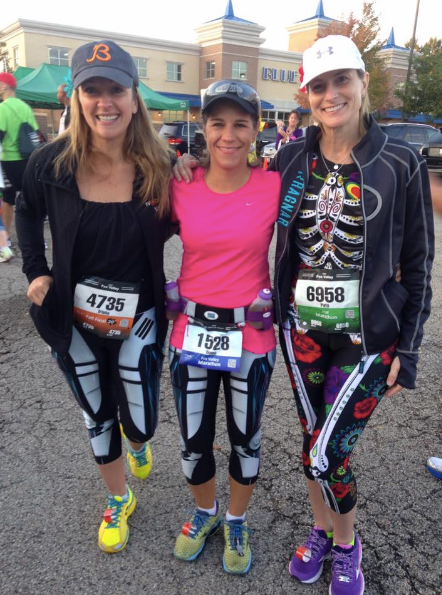 *Courtesy of No Names Have Been Changed. No One Is Innocent.

For a long time I ran things with only two goals:

Then I ran more things because I like shiny medals. I entered the Chicago Marathon lottery because I like winning things and the word “lottery” sold me. I got a spot. I took that as a sign to run the marathon (PS to all you people who hope year after year to get in, I apologize; I now realize how coveted spots in things like these are and how I was all “I LIKE RUNNING!” and you were all “I need this so I can qualify for Boston” and stuff—sorry, I’m still learning).

I let a woman I had only met once talk me into running Ragnar. I literally hopped into a van that pulled into my driveway with five strangers in it. It’s exactly the opposite of what your mom teaches you as a child. They didn’t even mention free candy.

RELATED: Why The Bond Between Running Buddies Is So Special

I had the time of my life. Until Ragnar, I had never run WITH people. Running was my solo activity, where I talked myself through life and all it tosses my way. Surely I couldn’t have enough oxygen to talk OUT LOUD while running? Yet after those 3 days together, I was hooked on these people and when they said “let’s run together” I said “I LIKE RUNNING!” And we did. And it was good.

That random woman who convinced me to get into the van is now nicknamed Subsy. The other half of my Girl Squad (also found in that big white van) is WK—which is short for the not-meant-to-be-offensive “White Kenyan.” As the name indicates, she’s my fast friend when it comes to running. Not to dating. Without these two, I would never have even thought about a sub-2 hour half marathon. Speed wasn’t on my radar. I had started running when my weight loss stopped (that’s actually only like half of the story, because if it weren’t for an over-served New Year’s Eve and a discount code hitting my email, I never would’ve started running but that’s for another time). Running wasn’t about anything other than being less sturdy. And not vomiting. And not dying.

The night before the race I was kicking some serious butt at games of flippy cup. Shortly after midnight I realized I had less than five hours until I needed to depart for Madison. These are my ways of saying that I wasn’t taking this race seriously. I hadn’t even looked at the altitude—THAT is a big deal for me. I’m slightly anal-retentive.

I rocked that race. There is no other way to put it. The cross-training I had been doing clearly helped on those Everest-like mountains Wisconsin refers to as “rolling hills.” The amount of support on the course for all the women was magnificent. The excessive drinking the night before kept me relaxed and my expectations low. I’m confident that is part of why it was so successful for me. I didn’t have time to think about going to the bathroom 100 times. I didn’t have the energy to talk myself out of a great race. I just ran. I enjoyed the hell out of my time with Subsy and WK. And when it was time for us all to separate and run our own races, I was comfortable with that too.

It is my current half marathon PR. I can’t wait to beat it.

That event is everything I love about Subsy and WK, multiplied by 100. It’s hundreds of people out supporting the running community and insanity and positivity and all the other “ity” words including some fake ones because I’m not all that sure “positivity” is even one. It didn’t matter your pace or your distance, you were going to be cheered and made to feel loved and that is a weekend I can support. THAT is what my Girl Squad does for me and that is what Her Madison Half does for everyone. No matter your pace, no matter your distance, you will find your people. I love my people.

Overcoming Discrimination as a Transgender Runner