Combining running and life-skills lessons, Girls on the Run is raising a generation of confident and strong young women.

The sea of pink and green says it all: this is girl territory. Nearly 800 elementary school girls have taken over a grassy field in Vasona Park in Los Gatos, Calif., for the Girls on the Run 5k. To the thumping sound of a techno beat, the girls prepare to run by painting pink and green “warrior” stripes onto each other’s cheeks and spray-painting their hair.

As participants of Girls on the Run—an after-school program that combines running with life-skills lessons for girls ages 8 to 13—the girls have been building up to the 3.1-mile distance over the course of 12 weeks. Despite being busy with hair and makeup (and stickers and ribbons), they are eager to talk about their experience in the program.

“I learned how to speak up for myself,” says fifth-grader Kate Atherton, who explains that some kids at school had been calling her names and she finally decided to talk to them about it. “I told them how I felt and they said, ‘We didn’t know you were so upset.’” Another fifth-grader, Katie Snell, says she learned how to be a better friend.

And Megan Milburn, a fourth-grader participating in her second GOTR season says, “Before, I didn’t know I could run a 5k.” As the girls continue to share their discoveries one thing is clear: they are a confident, self-assured bunch. A girl in ponytails sums it up best when she says, “I learned to believe in myself.”

These girls are a prime example of how the Girls on the Run program is helping to raise a generation of con_ dent, strong and active young women. Now in its 14th year, Girls on the Run operates in 3,700 communities across the United States and Canada and expects
to reach a record 70,000 participants in 2010, bringing the total number of girls served to more than a quarter million.

Girls on the Run, which calls itself a prevention program, uses running to steer girls toward a life of physical, emotional and spiritual health. “We hope to instill at an early age how running can transform your life,” says Liz Kunz, president of Girls on the Run International. “How the deeper purpose of running is love of self.” With self-love or self-respect, says Kunz, girls are more likely to write their own definitions of self, rather than let society define them. As a result, they will be less likely to engage in unhealthy behaviors like drugs, alcohol or eating disorders, or end up pregnant or in abusive relationships.

Through running, girls make the connection between exercise and feeling good. A consistent refrain from participants was that they felt stronger and more capable after running. Research shows that when girls participate in sports, their confidence increases, says Rita DeBate, Ph.D, associate professor in the College of Public Health at the University of South Florida, who has conducted multiple studies on the effectiveness of the GOTR program. Her research shows that girls’ body satisfaction, overall physical activity level and self-esteem increases during the program. These findings proved constant across the country, regardless of geographic location or socio-economic status. “If we can help girls stay active, we lay the foundation for healthier behaviors and lower the chance of risky behaviors,” DeBate says.

The 24-lesson curriculum mixes running workouts with games and group discussions, on topics ranging from emotions and gratitude to gossip, bullying, drugs and nutrition. In the revised curriculums introduced earlier this year, dating and the Internet were added for girls ages 11 to 13.

“The girls love the games, but they also understand the lessons,” says Else Sinsigalli, 41, a mother of four daughters who has been a coach for the Silicon Valley chapter for three years. She cites the women and media lesson as an example: “After the warm-up, the girls look at magazine ads and write down five things the image is trying to make you believe their product will give you. Then as the girls run their laps, we ask them to yell out a quality they admire. They do not say ‘windswept hair’ or ‘perfect boyfriend,’ they yell things like bold, brave and integrity.”

The girl box is buying into the idea that you are not enough, whatever enough means for you.

Breaking Free from The Girl Box

Such outcomes were exactly what Molly Barker hoped for when she founded Girls on the Run in 1996. Her goal was to find a way to keep girls out of the “girl box”—that narrowly defined space that says you should be this (thin) or that (taller, smarter, prettier, more popular).

“The girl box is buying into the idea that you are not enough, whatever enough means for you,” Barker says.

It’s a place she found herself locked into at age 15. Barker had always been active, but she had begun to judge her body, not by what it could do, but by how it looked. And she started drinking in order to be accepted. Barker, 49, battled with alcoholism for years, but she is quick to point out that alcohol was an outlet (it just as easily could have been food or drugs). The problem was that she had stepped into the girl box and didn’t have the self-respect to step out of it—until she went for a run on July 7, 1993.

Barker had been running since she was 15, but this run was different. “I had hit bottom,” she says from her home in Charlotte, N.C. She was a 32-year-old divorced single mom struggling to put alcoholism and self-doubt behind her. It was a windy, gray day with a huge thunderstorm in the distance and at one point during her run the girl box just fell away. “I burst into tears,” she says.

“Everything I thought was important wasn’t, and after that I couldn’t go back to being who I was not.” Barker started reading about the connection between self-esteem and sports (she was an Ironman triathlete) and wished someone had talked to her about drugs, peer pressure and self-worth when she was young. So Barker, who holds a master’s degree in social work, began writing the curriculum for Girls on the Run. She targeted girls 8 to 13 because at that age they form behaviors and opinions that inform the rest of their lives. “This is the latency period of development,” Barker says. “Girls are watching and absorbing. They’re starting to turn to their peers, but they’re still open to listening to what adults have to say. It’s a critical time when they can be most influenced to build a healthy life.” 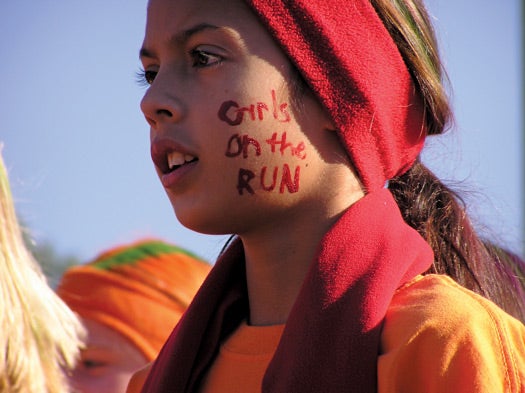 Lessons to Last a Lifetime

The hope, of course, is that the lessons will stay with the girls as they grow up. DeBate will begin a study on the program’s long-term effects beginning in spring 2011, but if testimony from past participants is any indication, the benefits do indeed last. Vanessa Fraser, a 15-year-old entering her sophomore year in high school who went through the program when she was nine, says GOTR taught her goal setting.  Completing the 5k made me see I can set and fulfill a goal,” she says, a practice she is applying to her cross-country career and to her choice of college, Stanford University. Fraser adds that she feels prepared for future situations, like being pressured to do drugs. “I’ve had a chance to think about it and I would say, ‘If you want to do that, that’s your choice, but I choose not to,” she says.

The program has had a few unexpected outcomes. Coaches report that the lessons have spilled over into their family life, helping them become better at resolving conflict and listening to each other. One coach said that teaching the lessons helped her address her own emotional issues, including growing up with low self-esteem. And Kunz reports that after one woman began working as a volunteer coach, she left an abusive relationship. There are so many external, things that can weaken your belief in yourself, like Internet, TV and ads,” says Elizabeth Park, who’s been a Girls on the Run coach for five years. “But the program gives girls a bearing that many of us didn’t have growing up, a point that the girls can come back to over and over again.”

One of those bearings, of course, is running. Lauren Arizmendi, 22, who was among the first to go through the program, says that even 13 years later, running remains central to her wellbeing. “It’s my quiet time, my outlet,” she says. And Fraser, the upcoming sophomore, talks about the sport with a passion beyond her years. “Running is my getaway from stress, it’s my feel-good place,” she says. “I really don’t know what I would do without it.”

To continue to grow and help girls across the country become confident women, Girls on the Run International needs volunteers to serve as coaches. “If someone wants to make the difference and has the time to get involved, we encourage them to sign up,” says Liz Kuntz, president of Girls on the Run International. “Coaches get so much out of the program. You’re not only changing the lives of these girls, but you’re also changing your own life.”

Anyone can volunteer as a coach—men and women, beginner and experienced runners alike. Kuntz reinforces that running ability is not a requirement. Coaches commit to twice a week for about 1.5 hours throughout a 12-week cycle. The program is typically held after school from 2-4 p.m., although some chapters meet in the morning and evening. Each team has a head coach and assistant coach. While head coaches must be female, men are welcome to volunteer as assistant coaches. “If someone wants to experience the program firsthand and feel a sense of accomplishment about making a difference in the lives of girls, coaching is for them,” says Kuntz. “It’s such a rewarding experience.”

If you’re interested in becoming a coach, visit the Girls on the Run International website at girlsontherun.org to find a chapter near you.

Mirna Valerio’s Advice to Her Younger Self: Practice Saying “No”