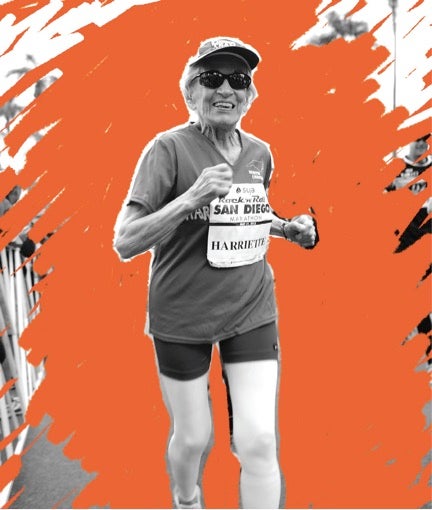 “At my age, to inspire anybody, that’s nice!” laughed Thompson at the 2015 Rock ‘n’ Roll San Diego Marathon. But the humble runner continues to inspire people the world over—while pushing the boundaries of what we think of when we think of “marathon runner.” At this year’s race, Thompson became the oldest women to complete the full 26.2 miles and smiled from start to finish.

Thompson says that she did not run her first marathon until age 76—proving that it is never too late in life to set big goals. “I guess it’s sort of unusual now, but in 10 years it won’t be unusual at all,” she has said. “People are living longer.”

The two-time cancer survivor, who lost her husband of 67 years just a few months before this year’s race, honors tragedies in her life by staying positive. Thompson has raised nearly $100,000 for the Leukemia & Lymphoma Society. Next year, she plans to fundraise again and return to the San Diego race— setting the bar one notch higher at a happy, healthy 93 years.

Discover More Of Our 15 Most Powerful Women In Running:
Sarah Attar

Relationship Advice: How to Rekindle Your Love of Running