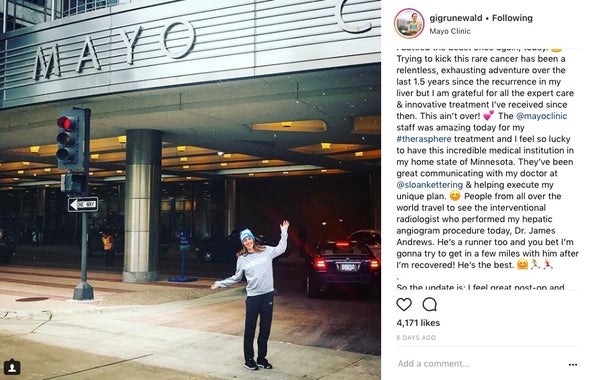 There’s really no one quite like Gabriele Grunewald. The 31-year-old elite runner who spent most of 2017 battling adenoid cystic carcinoma–a rare cancer that most recently penetrated her liver–for the fourth time posted a cheery photo on Instagram last week after undergoing a liver-directed radiation treatment at the Mayo Clinic in Rochester, Minn. Arms outstretched, smiling wide, Grunewald didn’t look like someone who had just been through radiation–and she rarely does. While checking in with Women’s Running this morning, Grunewald’s voice was a perfect match to the earlier picture: bubbly and upbeat, she’s pleased that her radiation recovery is going as smoothly as it is.

“I had the planning procedure in November, and I had a lot of swelling and bruises, which goes away after five to seven days,” Grunewald explained. “This time, I didn’t have that same bruising and swelling, which was a nice surprise.” Though she’s feeling low on energy and generally fatigued this week, those side effects are far less significant than the repeat experience she was expecting after her November procedure. The best news is that she’s felt well enough to run every day this week and plans to kick her training into high gear in the weeks ahead. “I’ve run 8 miles most days this week,” she said. “I haven’t done a hard workout yet. I think I’m going to go to the indoor track for the first time tomorrow.”

The thought of returning to the track is a tantalizing one for Grunewald. Since competing in the USA Outdoor Track and Field Championships in June, the only time she’s really spent on a track was while visiting one during a recent trip to Monaco. “I’m chomping at the bit,” she said. “I want to see what kind of shape I can get in over the next few weeks.” Before her preliminary radiation procedure in November, Grunewald maintained a basic fall training regimen while undergoing immunotherapy. Grunewald credits her coach, Dennis Barker, with keeping her training on track while remaining realistic about her workout schedule amidst all of her doctor appointments. “He basically was hands-off this fall and gave me guidelines of what a good fall base training would be, and if I could get it in, great,” Grunewald said. “Some days, I was stuck in more appointments than I thought, and I was planning to do a workout afterwards, but I couldn’t. In the past, I wouldn’t always give myself that flexibility, but it’s a requirement right now for me to prioritize my health and listen to my body along the way.”

Related: Q&A At Our Cover Shoot With Gabe Grunewald

Throughout her treatments this year, Grunewald has retained support from her doctors to continue training. One in particular, Dr. James Andrews, is a radiologist who specializes in liver tumor treatments–and happens to be a fellow runner. “The first time I met with [Dr. Andrews] was in spring,” Grunewald said. “He knew right away that there were some modifications that he could make to the procedure itself so that I could run a few days later. Knowing I’m a runner changed the way he approached the procedure.”

With her final radiation treatment of the year now out of the way and another round of immunotherapy on the horizon for early 2018, Grunewald sounds excited to be feeling well enough to enjoy the holiday season–and very eager to prepare herself for a competitive 2018. With the USA Indoor Track and Field Championships less than 10 weeks out (taking place at the Albuquerque Convention Center February 16-18 in Albuquerque, N.M.), it’s about time for competing athletes to dive into the deepest reaches of their training–and that’s exactly what Grunewald plans to do. “This next month, I’m going to work hard and hopefully feel good and get a sense of what shape I’m in,” she said. “I first want to see where my fitness is, but I want to take a crack at setting a PR. I’d love my indoor PR [for the mile] to be faster than 4:30, but I don’t want to put pressure on myself. I also want to keep setting goals that I’m excited about. Maybe it’s not going to be a 10 out of 10 race for me, but I still want to be competitive.”

The outdoor track season begins shortly after the indoor season ends, and Grunewald hopes to compete at that time, as well. “2017 was a challenge in terms of how much I raced,” she said. “I would love to use the indoor season as a good foundation for having even better races outdoors.”

After such a difficult year, it’s nice to hear Grunewald sounding chipper and excited for the promise of a new season on the horizon. There’s no doubt about it: if anyone deserves a shot at a spectacular comeback season, it’s Gabriele Grunewald.

Massive Support Is Pouring In For Gabe Grunewald’s Cancer Treatment

Start Running With This Beginner Bootcamp